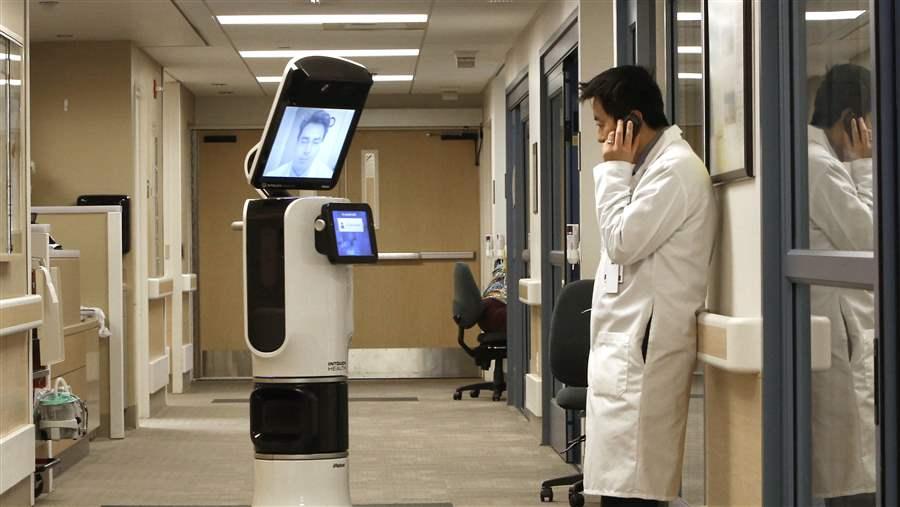 A California doctor waits to confer with a doctor at another hospital whose image is displayed on a monitor. States have taken different approaches to regulating telemedicine.

Telemedicine has been praised as a cost-effective way to link doctors and patients, enabling physicians to monitor their medical conditions and consult with specialists in a way that overcomes time and distance.

But despite a half-century of technological advances, the ready availability of interactive devices, and the full-throated encouragement of the Obama administration, advocates say telemedicine has failed to reach its full potential, due largely to policies in some states that make it difficult to practice, and pay for, such care.

“The technology has opened up this huge opportunity, this game changer,” said Allison Wils, director of health policy for the ERISA Industry Council, a trade association that advocates on issues related to health care for large, multistate employers. “The problem is that there are still varying levels of comfort with it across the states.”

Some states require that patients be accompanied by a health professional during telemedicine sessions. Hawaii, Indiana and Ohio limit Medicaid coverage to patients who live a minimum distance from their providers. (In Indiana, for example, the standard is 20 miles.) Another significant hurdle is the requirement that doctors be licensed in every state where they practice medicine, digitally or otherwise.

Because of those barriers, telemedicine advocates say, the elderly, the infirm, the isolated and the busy are being denied full access to needed health care.

States that have been slower to embrace telemedicine, including Arkansas, Rhode Island and Texas, are merely being prudent, waiting to be assured that the new technology does not diminish the quality of care patients receive, say some physician regulatory boards. “There is a concern that whatever is put in place not be dangerous,” said Lisa Robin, chief advocacy officer for the Federation of State Medical Boards, which represents the state boards that license and discipline doctors.

But those pushing for a less restrictive approach to telemedicine say it is not an inferior form of medicine but a vehicle for extending quality health care to more places. And, they argue, some policies hampering the spread of telemedicine have been motivated by fear of competition among more traditional practitioners.

“In some states, the issue comes down to protecting their doctors from outside competition,” said Latoya Thomas, director of state health policy at the American Telemedicine Association (ATA). “Their doctors with brick-and-mortar practices assume that someone who uses telemedicine is trying to take away patients.”

Telemedicine’s origins date back to the early days of the U.S. space program, when NASA scientists developed technology that enabled doctors to monitor the physiological conditions of astronauts in space. Thanks to rapid advances in interactive technology, telemedicine developed quickly, principally to link physicians to remote populations in such places as Alaska and Arizona's Tohono O'odham Indian Reservation.

Telemedicine also spread from rural to urban areas. Doctors now monitor or communicate with patients from afar on everything from routine preventive care to chronic disease management and psychiatric conditions. Primary care doctors and their patients consult with specialists and diagnosticians who might otherwise be beyond their geographic reach.

The industry received a major boost from the American Recovery and Reinvestment Act of 2009 and the Affordable Care Act of 2010, both of which increased federal spending on health information technology and telemedicine. President Barack Obama has often extolled its potential to increase access to quality health care while cutting costs. Nearly 13 million Americans use telemedicine, according to the ATA.

Some state laws and regulations govern insurance coverage of telemedicine.

Twenty-nine states now have parity laws that require private insurers to pay for telemedicine at the same rate as in-person services, according to the ATA. Arkansas, Michigan, Oregon and Vermont only require parity if the technology is both audio and visual or in real-time rather than recorded. Arizona only enforces parity when patients live very far from providers.

Joseph Wendelken, of the Rhode Island Health Department, said that, because of Rhode Island’s small size, “what is generally referred to as telehealth is less common in our state.” Rhode Islanders, he noted, are generally located within an hour’s drive of first-class medical centers with topflight specialists.

Many states have also adopted laws and policies concerning how physicians practice telemedicine. Some states require that a health professional be physically present with a patient during a telemedicine session. Most states require patients to sign special consent forms.

Some states require in-person follow-ups. Texas is locked in a federal lawsuit with the provider Teladoc, which digitally links patients and doctors, over the state’s requirement that doctors meet with patients in person before moving to a digital relationship or have other providers physically present with patients when treating them remotely for the first time. Arkansas has a similar law.

Russell Thomas, a family practice doctor in the small town of Eagle Lake, Texas, and former member of the Texas Medical Board and of the Federation of State Medical Boards, provides primary care through videoconferencing to at-risk students at a high school 300 miles away. He also consults with cardiologists and dermatologists in Houston for his patients.

But, he said, doctors should first meet with patients before moving to a digital relationship. “I can’t imagine that I can provide the best care to my patients if I never laid eyes on them, if I never physically assessed them.”

For its part, the ATA argues that telemedicine doctors should be governed by the same policies and restrictions that apply to traditional physicians. “Our belief is that if you license a health care provider, you expect them to uphold the standard of care—whatever tools they are using,” the ATA’s Thomas said. In other words, it should be left up to each physician who practices telemedicine to determine if a remote session suffices or if a face-to-face visit is necessary.

States that put additional requirements on telemedicine doctors, she said, are depriving people of access to medical care. “It’s a delivery model that may not be familiar to everyone, but where it is available, it should be used fully.”