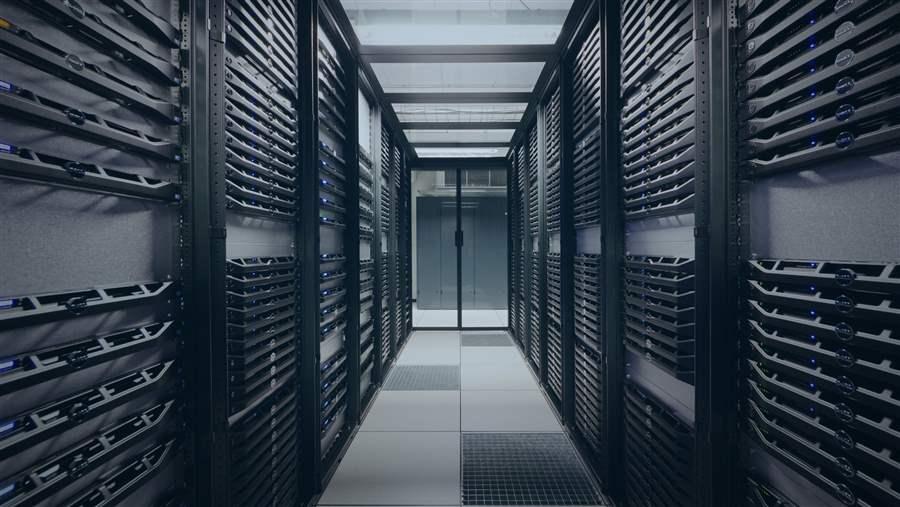 Rows of servers that hold vast amounts of information for customers far from their homes and offices in the Internet “cloud.” States are looking at how to tax cloud computing.

There’s an old saying in the military: “If it moves, salute it.” As states scramble for revenue in an increasingly Internet-based society, their expression might be: “If its electrons move, tax it.”

With sales of computer software CDs declining, and consumers downloading more programs and storing more files on the Internet, many states are looking to the “cloud” as a new source of tax revenue.

Think of it like this: DVD sales have plummeted, but streaming video is easy and cheap; thumb drive sales have dropped, while many people are storing data in the cloud. And when the sales of physical goods decline, so does state sales tax revenue.

That gives states an incentive to look for new entities to tax. And the cloud is the new target. But as states look to tax cloud services, questions arise as to whether storage space in the cloud is a tangible “good,” subject to sales taxes, a “service,” subject to use taxes, or neither of those. Different states are making different decisions and the situation is still evolving.

“For states to be able to impose a tax, they have to have some jurisdiction over the entities they are taxing,” said David Shakow, a Gabelli fellow at Fordham University who has written about the taxation of cloud computing.

Shakow said states find it easy to tax a software product such as TurboTax when it comes in a box off a shelf or in the mail. And states may find it easy to tax the product if it’s downloaded on to your home computer because it’s used in their state and therefore subject to their taxes.

“Some courts and states have said there are electrons moving around there and that’s taxable,” Shakow said.

Ohio last year ruled that cloud-based communications services for businesses are subject to the state’s 5.75 percent sales tax, with a few caveats. The service is taxable if the benefit is received in Ohio, Tax Commissioner Joseph Testa said in the ruling opinion.

The law from which the opinion was derived has been around since electronic information services became popular in the 1990s, said Laura Stanley, counsel for sales and use taxes for the Ohio Department of Taxation.

The 5.75 percent tax, she said, is assessed on the fee the electronic storage company charges a business for its services. Local sales taxes, which vary among counties and cities, can be tacked on top of that.

The tax applies only to businesses, not individuals.

Utah has imposed its 4.7 percent sales tax on prewritten software, including that used from the cloud, for three years, just as it has taxed computer hardware. The State Tax Commission said that if a provider of cloud computing services is located in Utah and sells to a client in Utah, the transaction is taxable at the point of sale. If the seller is located outside of the state, then responsibility falls to the buyer to remit the sales tax.

Scott Smith, the commission’s deputy director, said that when the legislation was passed, it was designed to apply to prewritten computer software, like accounting or tax calculation programs, which were generally available. The idea, he said, was that the tax applied because of where the user was located, presumably in Utah, not where the software was from.

Utah state Sen. Wayne Harper, a Republican who sponsored the legislation, said he thought there ought to be a way to tax sales of computer software that are increasingly taking place entirely online.

The idea was initially brought to him, he said, by businessmen concerned that brick and mortar stores that had to charge the sales tax were being put at a competitive disadvantage against Web-based services.

The issue was further complicated, he said, because some services in Utah were taxable regardless of whether they were obtained through the cloud. The lawmakers needed to write a statute that would apply to cloud-based services while conforming, as much as possible, to existing law.

They ended up with a law designed to cover existing Internet products, including software and cloud-based services.

“If you buy tax software, like TurboTax, that is a taxable transaction,” Harper said. “But if along with it comes a maintenance contract if something goes wrong, the maintenance agreement is not taxed for business but it is for an individual.”

Spreading to Other States

Harper also sits on the Streamlined Sales Tax Governing Board, which aims to normalize sales taxes across states. With states all over the place on whether or how to tax cloud services, Harper said he hoped the Utah law would serve as an example.

“The goal of the Streamlined Sales Tax Board is to go through and create definitions that states and counties can use so when a business comes in and they have locations in, say, 24 states, they can have uniform standards,” he said.

So far, there is no uniformity on taxing the cloud.

In fact, decisions in seven states—Florida, Georgia, Massachusetts, Tennessee, South Carolina, Virginia and Wyoming—have ruled at least some parts of cloud computing exempt from taxation, according to Arthur Rosen, a tax law specialist in Washington, D.C.

For example, Rosen said, Florida ruled cloud-based infrastructure a service and not taxable. Georgia ruled that remote access to cloud software that is not downloaded on to a buyer’s computer was exempt. And Wyoming said broadly that cloud computing was not taxable.

Meanwhile, what tax, if any, should be imposed on the cloud was still to be decided in Vermont and Idaho, Rosen said.

A solution to the cloud tax issue may require action by the U.S. Congress or an agreement among states themselves, Shakow said.

“In theory, there is some logic to taxing cloud storage as leasing tangible personal property,” he said. In other words, renting space in the cloud is akin to renting a physical storage shed, on which some states charge a “use tax.”

“Similarly, it makes sense to tax cloud products where they are used, but that is not easy to determine,” Shakow said. “That is why I think jurisdictions will have to cooperate in deciding how to allocate these types of income.”

The Streamlined Sales Tax Board has put off making a recommendation on taxing the cloud, pending action in Congress on legislation that would standardize state sales taxes on Internet transactions on goods—which may open a pathway to uniformly taxing Internet services. The proposed Marketplace Fairness Act in the Senate and the Remote Transaction Parity Act in the House have the same goal. But the legislation has stalled.

Amazon, the nation’s largest online retailer, announced in June that it would begin collecting state sales taxes on the goods it sells in half the states, home to 247 million people or 77 percent of the country’s population. In September, it added Michigan to the list, bringing the total past 80 percent of the population that must now pay state sales taxes on what they buy from Amazon, according to calculations by Citizens for Tax Justice, an advocacy group.