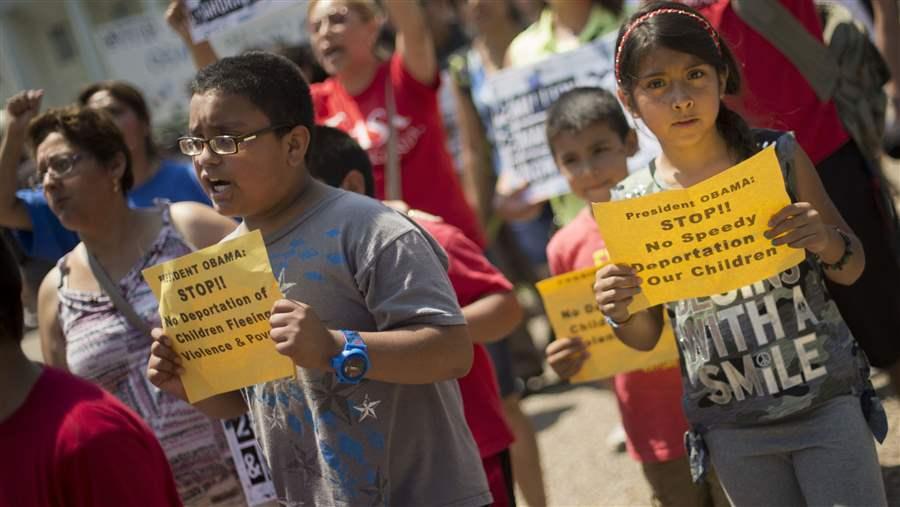 Children from Baltimore demonstrate against deportations at a rally in Washington last year. States and cities are trying to allay the fear of deportation among immigrants.

BALTIMORE—A young father of three, an unauthorized immigrant, is haunted by the story of a close friend he says was falsely accused of rape and deported to Central America.

“He was at the store waiting and somebody came up and said he had been charged, and they took him away,” said the man, a member of a weekly support group for unauthorized immigrants of inner-city Baltimore. Some are so stressed out by their status they suffer from blurred vision, weakness and dizziness, their caregivers say.

“Now he’s back in the home country and there’s a black mark against him if he ever comes back,” said the man, who, like others in the group, did not want to be identified by name out of fear of deportation. “If you don’t have money for lawyers and bail, and you didn’t do the crime, they deport you.”

The fear of deportation persists in immigrant enclaves across the country, despite a new federal policy in effect since last November that has dramatically reduced the number of noncriminal deportations. Cities like Baltimore and states like California and Nevada that want to provide more services to unauthorized immigrants are finding that it takes a lot of reassurance to get such people out of the shadows.

Advocates say immigrants’ fear can prevent them from cooperating with police and derail attempts to ensure that all drivers are licensed. Their fear can also endanger growth in areas that are looking to immigrants to help reverse population losses. 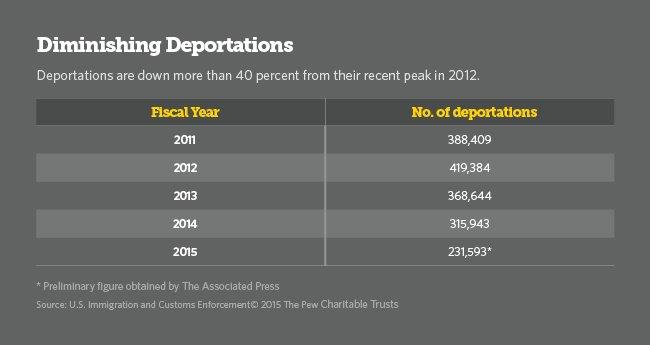 California, which this year rolled out alternative driver’s licenses for unauthorized immigrants and others unqualified for regular licenses, emphasized that police don’t want to use the distinctive licenses to identify drivers for deportation, said Erika Contreras, chief of staff for state Sen. Ricardo Lara, a Democrat.

The state organized 200 presentations and workshops to introduce the new licenses in hopes of bringing immigrants out of the shadows. “A law enforcement officer was right there saying, ‘Come out, don’t be afraid, we want you to have a driver’s license and we want you to get insurance. Everybody will be safer,’ ” Contreras said recently at an event sponsored by The Pew Charitable Trusts (Pew funds Stateline).

Fear persists even in places that, like Baltimore, have made a point of welcoming unauthorized immigrants. Mayor Stephanie Rawlings-Blake, a Democrat, has been outspoken about the importance of immigrants to the city’s growth as other groups decline.

Catalina Rodriguez, director of the Mayor’s Office of Immigrant and Multicultural Affairs in Baltimore, said many of the changes aimed to improve immigrants’ access to city services.

“It’s part of building a relationship with the community, part of breaking the barriers down,” Rodriguez said. “We want to let them know it’s OK for them to call the police and tell them what’s happening in the neighborhood.”

'He Would Have Killed Me'

One support group member, who works in construction, said he feels a duty to report crimes, partly because he was treated well by police when he was assaulted recently.

The police stopped an attacker who had slammed the man’s head with a car door and tried to take his car keys, but didn’t ask about his immigration status, the man said.

“Thank goodness. If they hadn’t done that, he would have killed me,” he said. “It was a dark day for me, but I was treated well. I am afraid of deportation because I have a family and that family depends on me.”

But others in the group said they find any interaction with police worrisome, and weren’t so sure they would report a crime.

“It is a risk, so I might not call unless it’s something serious—maybe if it was two or three against one, something really unfair,” another man said.

The Police Executive Research Forum, which studies best practices for police, found in a study last year that police can often be caught between enforcing immigration laws and forging ties to the community.

Alabama, for instance, passed a law in 2011 requiring police to check immigration status during traffic stops if there is reasonable suspicion that the individual is in the country illegally, one of the nation’s most far-reaching laws aimed at unauthorized immigrants. But local farmers complained that the law frightened migrant workers into leaving the state until local sheriffs stopped enforcing it.

When Prince William County, Virginia, passed a similar law in 2007, then Chief of Police Charlie Deane publicly expressed many reservations, saying it would cause anger at his officers and limit cooperation. “You cannot keep the community safe unless the majority of the community has trust in the police and will call, will bear witness when they need to,” Deane said.

A University of Texas study this year found that crimes, especially violent crimes, are reported less often in cities with many immigrants. The study, which analyzed the National Crime Victimization Survey, said fear of deportation played a role.

Immigrants may “rationally decide not to report crime to the police because of their citizenship status,” the study concluded.

The Migration Policy Institute (MPI) estimates that only 13 percent of unauthorized immigrants are at high risk of deportation under federal priorities announced last year, down from 27 percent before then.

The new policy stresses deportation of serious criminals, although some misdemeanors can still be deportable. And, because the government reserves the right to deport anyone it deems a national security threat, and some immigration crimes like recent border crossings or returning after deportation remain deportable, the new rules don’t guarantee safety for immigrants.

Stories of questionable deportations can spread fast and cause continued tension, according to Marc Rosenblum, a deputy director at MPI. He cited the case of Max Villatoro, a pastor and married father of four, who was deported to Honduras this year over a drunken driving conviction.

U.S. Immigration and Customs Enforcement considers the crime a “significant misdemeanor,” which is still deportable. But the new rules give ICE discretion in handling such cases if the person is not a threat to national security, border security or public safety.

“We still don’t know how strictly ICE is going to interpret these new priorities,” Rosenblum said.

Preliminary numbers support the idea that the new policies are cutting down on deportations. A recent report obtained by The Associated Press shows deportations down more than 40 percent from 2012.

Detainers, or holds placed on local prisoners for possible deportation, have also dropped, but many are still being held who have not yet been convicted of any crime, according to an April report from the Transactional Records Access Clearinghouse at Syracuse University.

That’s one reason why states and cities that want to minimize deportations still need to limit cooperation with ICE detainers, said Jose Magana-Salgado, an attorney for the Immigrant Legal Resource Center.

“ICE is going to send more detainers to localities that cooperate more,” Magana-Salgado said, adding that many immigrants are sometimes painted as criminals merely because of immigration charges like returning after deportation or repeated border crossings.

In Baltimore, unauthorized immigrants who are single mothers say they feel especially vulnerable.

“It’s worse for a single mom,” said one woman who came from Mexico 10 years ago and works as a housecleaner, asking that her full name not be used. “When I leave to go to work in the morning I don’t know what’s going to happen if I don’t come back. What would happen to my daughters?”

San Juanita García, who studies female immigrants at the University of North Carolina, said the specter of deportation is especially hard on women.

“Mexican immigrant women experience a deportation threat directly taking a toll on their mental health, indicative of their more precarious status,” she said.

Baltimore support group members said they knew people who felt pressured by court-appointed attorneys into signing guilty pleas for felony crimes they did not commit. They are in prison awaiting deportation.

“They’re locked up, desperate, and they sign something and boom, 10 years and then they get deported,” especially those who can’t afford lawyers, said a woman who works at a bakery.

Several also told stories about seeing ICE cars waiting and watching at workplaces, bus stops, even playgrounds where mothers pick up their children.

The amount of vigilance seems unfair, another woman said: “It seems totally unjust because you see people who are working honestly, who don’t rob anybody, don’t commit any kind of crime, and especially a single mother is afraid they’re going to take her away.”