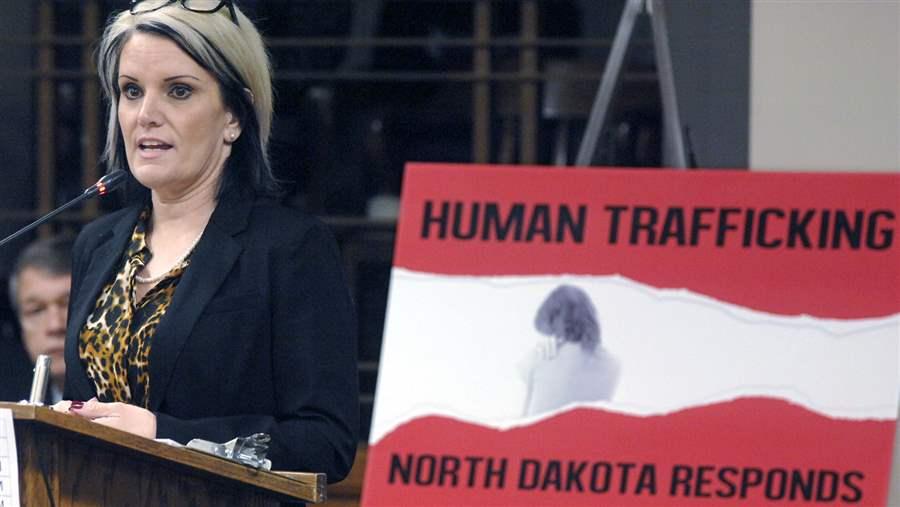 Windie Lazenko was trafficked for sex at age 13, but has since founded a group to spread awareness and help victims of sex trafficking. Many states are passing laws designed to stop minors from being sexually exploited.

This story has been updated with correct details for Oklahoma's safe harbor law.

Windie Lazenko was a 13-year-old runaway when she was first trafficked for sex.

It happened at a house party she attended with a friend and the girl’s older boyfriend in Orange County, California. Lazenko saw the boyfriend collect money from another man and woman in their 30s, and then her friend told her to wait in a nearby bedroom. Lazenko said she thought her friend was shielding her from a drug deal. Instead, the couple came into the bedroom and sexually assaulted her. When it was over, Lazenko went outside and threw up.

For Lazenko, that night was the beginning of 19 years of on-and-off work in the sex trade.

Lazenko, 47, left the sex trade for good in 2000. In 2014, she founded 4her North Dakota, which provides counseling and other resources to victims of sex trafficking. It’s a problem that is a growing concern for state legislators.

In the past decade, states have dramatically changed laws targeting the sex trade to distinguish between voluntary prostitution and the trafficking of women and girls who are forced or coerced into selling sex. Victims can be trafficked locally or across state lines by pimps or by organized crime syndicates.

Before the new laws, states primarily dealt with the sex trade by charging sex workers, usually women, with prostitution. Many of those laws remain on the books, but states are supplementing them with “safe harbor” laws that protect minors—and sometimes adults—who can prove they were coerced into selling sex.

The laws limit the degree to which these women and girls can be prosecuted and treat them as victims rather than criminals. Some states have passed laws allowing prostitution charges to be expunged from the records of those who have been trafficked. At the same time, states are toughening the penalties for the traffickers who force women into sex work, as well as their customers.

Since August 2014, 236 trafficking bills were enacted in 42 states and Washington, D.C., according to Shared Hope International, an anti-trafficking group. Every state but Hawaii now has a sex trafficking law on the books. On Tuesday, Nebraska Attorney General Doug Peterson, a Republican, unveiled a new plan to combat human trafficking in the state, with a focus on training law enforcement and other key players to recognize and respond to trafficking cases.

“Existing laws were inadequate because we weren’t going after the true offenders,” said Oklahoma state Rep. Sally Kern, a Republican who pushed for a measure that allows police to use wiretapping (with a judge’s approval) to investigate sex trafficking.

But while state lawmakers on both sides of the aisle have pushed for tougher sex trafficking laws, the scale of the problem is unclear. Critics say statistics that suggest that hundreds of thousands of women are being trafficked are unreliable.

David Finkelhor, director of the Crimes against Children Research Center at the University of New Hampshire, said many sex trafficking statistics are little more than guesses. But the uncertainty about the scope of sex trafficking or the best way to deal with it hasn’t prevented legislatures from taking action.

“The good news is this is a problem that deserves attention, research and awareness. The bad news is we’re approaching it with an unjustified confidence we know what we’re doing in passing laws and creating programs without really knowing what the best approach is,” Finkelhor said.

What is clear is that the new laws have given police a new mission: Instead of working to bust prostitutes, in many states they now focus on identifying sex trafficking victims and disrupting the system that produces them. So far, the results have been mixed.

A Focus on Minors

Sex trafficking laws have come in two waves, with states first rushing to make changes to their criminal codes and focusing on services for victims later.

Many states have changed their laws so that by definition, any minor involved in prostitution is considered to have been coerced or forced into doing so. It is the same principle that undergirds statutory rape laws: if a girl is underage, the sex cannot be consensual.

In those states, any minor found to be engaging in prostitution is usually referred to a social service agency, rather than being prosecuted. But states don’t always have resources specific to trafficking victims. Some are sent to domestic violence shelters or returned to foster care, and many don’t get help addressing the issues that led them into the sex trade.

Many girls involved in prostitution come from broken homes and may be runaways trying to survive on the streets, coerced into selling sex by force or manipulation. Crime researchers say it is exceptionally rare for young girls to get into sex work willingly, a reality that law enforcement has been slow to recognize.

“It sounds obvious now, but changing the criminal justice system is like turning the Titanic,” said Valiant Richey, a King County prosecutor based in Seattle.

Richey said many traffickers are “master manipulators” who know to how target girls who have tough home lives or have trouble fitting in with their peers. While many girls may initially think of the men as boyfriends, they quickly become their pimps.

But Richey, who supports a greater focus on traffickers and customers, opposes decriminalizing prostitution for minors.

“It gives the pimps a chance to say, ‘You won’t get caught. You won’t get arrested. It’s no big deal,’ ” he said. “Decriminalizing juvenile [prostitution] does not impact trafficking, pimping or buying in any way.”

In Seattle and King County, Richey said, the focus is now on reducing demand. In 2009, officers in the county charged many people with prostitution and few with patronizing, but those numbers have essentially flipped, with about 250 charges for patronizing and fewer than 100 for prostitution in 2014, according to data compiled by Richey.

Police in King County are encountering just as many sex workers, he said, but they are declining to charge more of them, especially minors. Instead, they are referring them to social services. Richey said law enforcement and prosecutors are hoping to build rapport with sex workers in the hopes of getting them to testify against their traffickers.

“It’s stuff like asking, ‘When was the last time you ate?’ and, ‘Where are you staying tonight?’ Police are asking nonjudgmental questions and getting fascinating answers,” Richey said.

Oklahoma is taking a similar approach.

“These women are very wary of police, so you only have one chance to really ask questions or it could be years,” before police have another opportunity to try and work with them, said Lt. Doug Kimberlin, who heads the vice unit for the Oklahoma City Police Department.

Oklahoma has a safe harbor law for girls 15 and under; those who are between 16 and 17 are presumed to be victims of human trafficking, though they may be charged with prostitution, according to Kimberlin.

Kimberlin said it can be difficult to determine whether someone is a prostitute or a trafficking victim.

“It’s hard to convince me a 15-year-old woke up one day and said ‘I’m tired of going to school, I’m going to go work the truck stops,’ ” he said.

The challenge is keeping the girls away from the pressures that forced them into sex work in the first place. Kimberlin said most do not have supportive families to return to, and he wants the state to provide more resources for them.

He said many girls often age out of the safe harbor laws without leaving sex work behind, especially those who started very young and feel it is the only marketable skill they have. Even if they return to sex work willingly, it’s easy to encounter the same violence and coercion, so many cycle in and out of exploitation.

Even with all the changes in the law, Kimberlin said the majority of arrests his vice unit makes are for prostitution rather than trafficking or buying sex.

Girls are reluctant to testify against traffickers, so successful prosecutions often are for other crimes such as statutory rape or money laundering. So far this year, the unit has arrested 27 pimps and 16 buyers, while 104 people have been arrested for prostitution. Kimberlin says police have only identified eight trafficking victims.

Kern, the Oklahoma legislator, said victims’ reluctance to testify against traffickers is one reason she pushed for the state’s new wiretapping laws. In other states, far more prostitutes are arrested than victims of human trafficking are identified, though police have begun to arrest fewer prostitutes overall.

In Minnesota, police across the state in 2014 identified 35 sex trafficking victims and arrested 47 pimps and buyers, compared to 616 prostitution arrests. In 2010, before the safe harbor law was passed, 966 people were arrested for prostitution, though that year’s report did not distinguish between pimps, buyers and prostitutes.

North Dakota is also working to shift its balance of arrests. Oil development in the state has led to an uptick in sex work, and while the state has had a trafficking law for five years, it wasn’t until this year that legislators approved additional provisions exempting minors from being charged with prostitution.

But Finkelhor cautioned that such statistics may be misleading, because in some states young people may be charged with prostitution so they can be helped—and supervised—through the juvenile justice system. With states now taking a closer look at what resources to provide outside of the justice system, he said training for foster parents, job training, or programs designed to keep teenagers from dropping out of school may be better than programs targeting sex trafficking overall.

Lazenko said it’s only possible to help victims when they’re ready to leave the sex trade. “Rescue missions are not possible,” she said. When they are ready, victims need a safe place to go that can serve as an entry point to other helpful programs, she said.

Some states are also providing resources to the buyers themselves to reduce recidivism and curb demand. North Dakota is one of at least eight states where buyers can be sent to “John school” to better understand the effects of the sex trade.

“You need to criminalize the buying side because if you don’t reduce the demand, you’re not going to solve the problem,” he said.