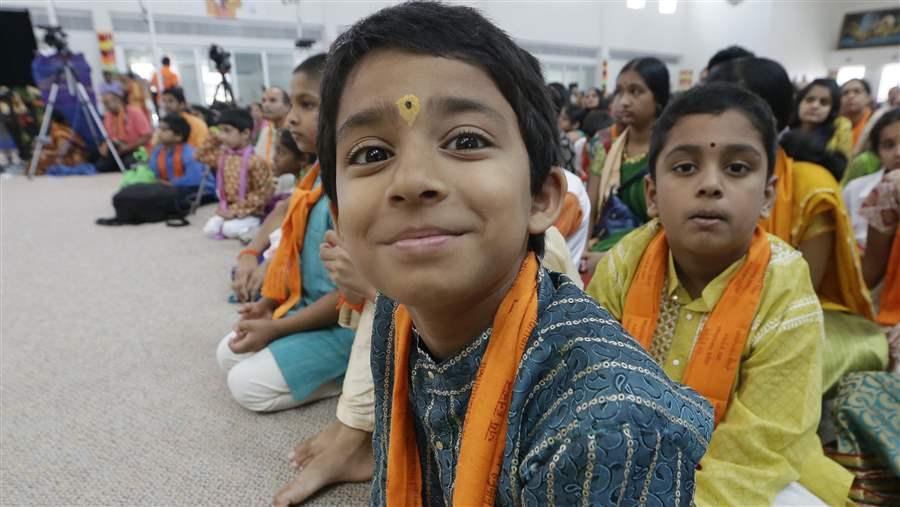 Devotees at the Karya Siddhi Hanuman Temple, which serves the Indian community in Frisco, Texas. Immigrants from China and India have contributed to the boom in foreign-born migrants moving to Texas from other parts of the country.

For more than a century, immigration in the U.S. followed a familiar trajectory: Immigrants made a home in the cities where family and friends had settled. And there, for a generation or two, they stayed put, creating Little Italys, Chinatowns and Ukrainian Villages. Eventually, their kids and grandkids decamped for the suburbs.

But recently, demographers have noticed a surprising new migration pattern: Increasingly, foreign-born professionals are opting to leave their initial U.S. homes, often in California, Florida, Illinois and New York, and pulling up stakes to head to the Lone Star State.

Immigrants generally have become much more mobile over the last few decades. And California, the nation’s most populous state, still receives the lion’s share of international migrants. But Texas leads the nation in the growth of its foreign-born population — and that’s because more immigrants are moving there from other states, according to a new report by the Texas Office of the State Demographer.

Today, foreign-born migrants are one of the largest drivers of population growth in the nation’s second most populous state. The foreign-born population of Texas, in total numbers and share of the overall population, is greater than at any point since statehood in 1845. One in six Texas residents was born in a foreign country, and roughly 40 percent of them moved from somewhere else in the U.S., according to the Texas Demographer report. This shift has significant policy implications for the state, particularly for education.

Traditionally, the vast majority of immigrants settling in Texas were Mexican, both documented and undocumented, thanks to the proximity of the Mexican border. Fifty-eight percent of Texas immigrants were born in Mexico, according to the Pew Research Center. (Pew also funds Stateline.) But across the country, immigration from Mexico and Central America has slowed dramatically, largely because of the recession and stepped-up border security.

Picking up the slack from Latin America are Asian immigrants, primarily from India and China. (Houston has a sizable Vietnamese community.) The Asian population in Texas more than doubled between 2005 and 2013, to 85,542. Asians are much more likely to move to the state from other states first, according to Texas state demographer Lloyd Potter. (The numbers of immigrants from Europe and Africa moving to the state remains small but steady, he said.)

“We’re seeing a big shift, a decline in Latin American migration into Texas and an increase in the Asian-born foreign population in Texas,” Potter said. “It’s increasing the diversity and cosmopolitan nature of our urban areas.”

This shift is reflected nationwide. Over the past decade, Asians and Pacific Islanders have become the fastest-growing group to enter the U.S., outpacing Latinos. They are projected to become the biggest immigrant group by 2055. As a whole, Asians are highly successful, the most educated, highest-earning racial group in the country.

In large part, Texas is attracting many of those immigrants because of how well its economy weathered the recession, said Randy Capps, director of research for U.S. Programs at the Migration Policy Institute. Its housing market remained relatively stable in the midst of the mortgage bust, while the energy, construction and tech industries flourished, particularly in Austin, Houston and Dallas.

Between 2005 and 2013, the state absorbed twice as many newcomers, both foreign and native born, than any other state, according to the Texas report. Highly-skilled, temporary workers on HB1 visas from India and China flocked to the state, as did university students from abroad. The state’s increased trade between China and India also helped fuel the boom, Potter said.

“Texas has become this job creation machine,” Potter said. California, meanwhile, was walloped by the recession. “California hasn’t created as many jobs, and it’s expensive to live there.”

Most of the foreign-born Asian migrants moving to Texas are highly skilled and educated, the report found. The report did not track the numbers of undocumented Asian immigrants. (Nationwide, an estimated 1.3 million of the 11.5 million undocumented immigrants in the U.S. are Asian, according to the Department of Homeland Security.)

“Texas has been a big magnet, both pre-recession, during the recession and after the recession,” said William Frey, a leading demographer at the Brookings Institution. “It’s not surprising they are able to attract this growing foreign born population from Asia.”

Highly educated people are more likely to pick up and move long distances, Frey said, which could mean that long term, the foreign-born population in the rest of the country could become more mobile.

All immigrant groups tend to cluster where others from their home country live, Frey said. But preliminary research shows that some Asians may be more likely to relocate to another state than Mexicans are, said Dowell Myers, professor of policy, planning and demography at the University of Southern California, who studied Mexicans and Vietnamese immigrants and their families in California and Texas.

Immigration has long been a contentious issue in Texas. In a 2014 Texas Politics Project Poll, Texans ranked immigration and border security as the biggest problems facing their state.

Because of its close proximity to Mexico, Texas often has been ground zero for the debate over undocumented immigrants. Of the 11.5 million undocumented immigrants that are estimated to live in the U.S., more than 1.4 million live in Texas, according to the Migration Policy Institute. When the country experienced a surge in unaccompanied children from Central America last year, Texas ended up taking in more minors than any other state.

Last week, a federal district court judge ruled that Texas can continue to deny U.S. birth certificates to the children of immigrants who cannot supply required identification because they entered the country illegally. The judge said the state can refuse to accept matricula consular cards, issued by Mexican consulates, as a form of identification to obtain birth certificates for U.S.-born children.

Also last week, the mayor of Austin called on state leaders to drop their lawsuit against President Barack Obama’s executive order providing protections to an estimated 5 million undocumented immigrants from deportation. (Texas is one of 25 states suing the federal government over the order.)

Texas’ changing population poses other policy challenges. State and local agencies have a variety of services to accommodate the needs of Spanish-speaking residents, but they are ill-equipped to handle the needs of Mandarin speakers, for example.

“That creates some additional requirements for states and cities. It’s an additional burden on them. Access to health care might be limited for people who don’t speak English or Spanish in Texas,” said Potter, the Texas demographer.

Schools also will have to adapt.

Texas is a big draw for all young people looking for jobs, Myers of the University of Southern California said. Young people have children. And with the boom in Texas’s immigrant population came a boom in childbirths.

But Texas ranked near the bottom of states, 45th, in the amount spent per-pupil on public school students from kindergarten through the 12th grade in the 2013-2014 school year, according to figures compiled by the National Education Association.

“If you capture most of the job growth, you’re going to get most of the workers, immigrants and natives,” Myers said. “Along with all those jobs, you just took on the added responsibility of educating the future workforce of America. It’s a package deal.”