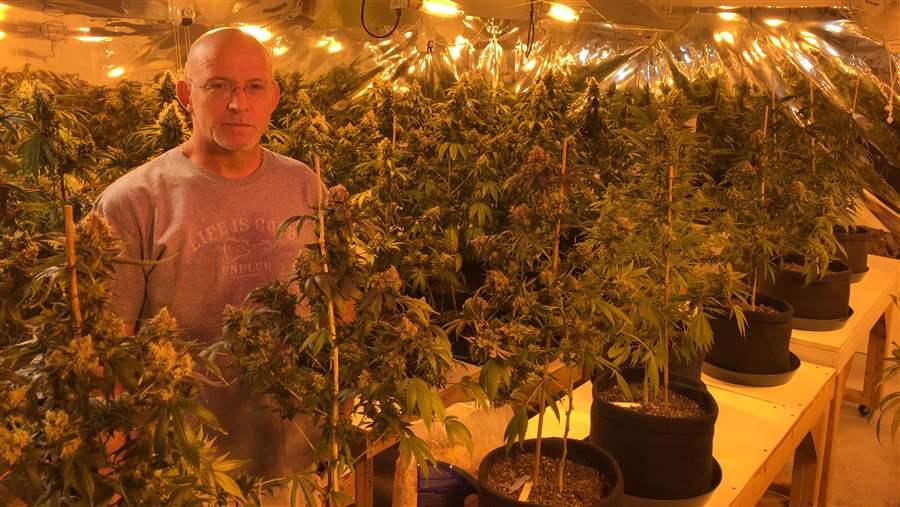 Mike Eacker stands among his marijuana plants in Kalispell, Montana. The future of his business may depend on a pending state Supreme Court case. Years after voters made medical marijuana legal, Montana and some other states struggle to regulate it.

KALISPELL, Montana — In a retrofitted garage in his suburban backyard, Mike Eacker tends to his marijuana plants while he waits to see whether his crop will continue to turn a profit.

For Eacker and other growers here in Montana, there is uncertainty as they anticipate the outcome of a state Supreme Court case that could effectively end commercial sales of medical marijuana and render their businesses unprofitable.

Montana is among several vanguard states whose voters eagerly legalized medical cannabis by passing broad ballot initiatives as many as 19 years ago, but left lawmakers struggling to regulate an industry that grew quickly with few rules.

Today, states like California, Montana and Michigan are still attempting to clean up their laws with bills that would develop licensing systems for growers, create a fee structure for providers and product, or legalize all marijuana use.

It’s a legislative and regulatory pitfall that lawmakers warn other states they could face as public demand for legal medical and recreational marijuana grows, and more states allow it.

Maryland opened the door to medical use last year, and Georgia, Oklahoma, Texas and Wyoming passed laws legalizing access to less-potent medical cannabis products for certain patients this year. At least 20 initiatives to legalize medical or recreational marijuana could be on the ballot in 16 states next year. And in November, voters in Ohio will decide whether recreational marijuana should be legal in that state.

Proponents of using marijuana as medicine say ingesting the drug can ease chronic pain, stimulate appetites for the very ill, soothe nausea caused by cancer treatments and prevent seizures in children with epilepsy. Detractors say the research surrounding medical marijuana isn’t conclusive, the drug poses significant public health risks and those who advocate for it use medical marijuana to trick voters into sanctioning an illegal drug for recreational use.

According to data collected by The Pew Research Center, public support for marijuana legalization is quickly outpacing the opposition. (Pew also funds Stateline.)

And unless state lawmakers get ahead of their constituents on legalization, they face a potential regulatory nightmare, said Washington state Sen. Ann Rivers. Rivers, a Republican, should know. Medical marijuana was legalized in Washington by voter initiative in 1998, leaving gaping regulatory holes and hazards that lawmakers like her have spent years trying to fix.

For example, she said, anyone in Washington, including children, initially could have gotten access to the drug because there was no registry of medical marijuana users. As lawmakers worked to fix their medical marijuana program, Washington voters in 2012 approved making it legal for recreational use.

To avoid legislating after the fact like Washington has, Rivers urges lawmakers in other states to legalize and regulate medical and adult recreational marijuana before voters push legalization on them and they have to catch up. “This is going to happen,” she said, “and you can either drive it or get run over by it.”

Montana’s relationship with medical marijuana has been rocky. Marijuana was legalized as medicine by voters in 2004, and, fueled in part by traveling doctors who offered easy access to prescriptions, the number of people authorized to use it ballooned from just 2,762 patients in mid-2009 to 31,522 patients, roughly 3 percent of the state’s population, by May 2011.

(While states like Montana legalized medical marijuana by ballot many years ago, patient use and sales really did not take off until 2009, when the federal government indicated it would generally not interfere with people selling and using marijuana under established state laws.)

The number of cardholders dropped after the state saw a series of high-profile raids in early 2011 by federal agents on businesses said to be involved in trafficking and evading financial reporting requirements on marijuana sales.  Around that time, the Legislature also cracked down on the marijuana industry, passing a new law that prevented marijuana growers from serving more than three patients or being compensated for their product, which advocates say rendered businesses profitless.

Those restrictions were thrown out by a state district court judge and the medical marijuana market was allowed to continue operating with very little regulation. The state Supreme Court is scheduled to consider the case on Nov. 4.

Already, growers in Montana such as Eacker sell marijuana to fewer people. As of July, there were 12,251 medical marijuana cardholders in Montana. Most have prescriptions to treat severe or chronic pain.

Eacker’s products include the buds of the plant, which his clients can smoke or vaporize, as well as various food products, known as edibles, infused with THC, the psychoactive compound in marijuana, and tinctures, which deliver a dose of cannabinoids in liquid form. He said he was forced to start growing marijuana at home after losing the lease to his storefront and growing space when his landlord became wary of prosecution following the federal raids.

While he says he turns a profit growing 13 strains of cannabis for 35 patients, Eacker says his business is in limbo, and his ability to continue operating will depend on the pending court decision.

He tends the crop himself and hand-delivers his products to patients because the state law is silent on whether or not providers can hire employees. Finding someone to lease him storefront space has been impossible.

“There was never a very real sense of feeling secure in what we were doing,” he said.

Fixing the medical marijuana system in Montana hasn’t been easy, said state Sen. Diane Sands, a Democrat who introduced legislation earlier this year that would have created a fee structure for marijuana providers and testing of products before they are sold to consumers.

Lawmakers aren’t eager to take action because of marijuana’s uncertain future, she said. In addition to the pending court decision, opposing groups are gathering signatures for two competing ballot measures next year: one to legalize adult recreational use of marijuana and the other to ban the drug completely.

Steve Zabawa, a car dealer from Billings, is leading the initiative to ban marijuana. He has until June to collect the more than 24,000 signatures needed to move his proposal onto the 2016 ballot.

Zabawa said he voted to legalize medical marijuana in 2004, but without sufficient regulations the industry “really got out of control and wasn’t anything about medicine.” The move toward medical use in Montana was a way to make voters more comfortable with marijuana and eventually willing to legalize the drug for recreational use, he said.

Legalization advocates want to profit from marijuana, Zabawa said. “They want the money, they want the income.”

Michigan, another medical marijuana vanguard state, has faced its own regulatory challenges. Passed in 2008 with majority support from every county, the Michigan law allows caregivers to grow and dispense the drug. But localities can ban commercial marijuana growers, known as dispensaries.

Two bills moving through the Michigan Legislature are aimed at creating a regulatory framework for medical marijuana. But the bills have been amended to be too restrictive, said Rep. Jeff Irwin, a Democrat who is pushing for the legalization of recreational marijuana.

The amended bills create barriers to access to medical marijuana, Irwin said, by requiring cannabis be tracked from the time the seeds are purchased to when it’s sold to patients. “If you grasp too tightly for control, it’s going to squeeze through your fingers and you’re not going to have control,” he said.

But other states are finding that to deter illegal drugs from flowing into state-sanctioned medical systems, they need to track the plants. They also need to monitor prescriptions and avoid large tax levies in states where recreational marijuana is legal to keep users from turning to the medical system or black market for a cheaper product.

In August, Rivers, the senator from Washington, and Daniel Pabon, a state representative from Colorado, where medical and recreational marijuana also are legal, sat in a room in Seattle filled with state lawmakers from across the country.

Their message to those from states that don’t have legal medical or recreational marijuana yet: Don’t wait. Begin figuring out how to regulate the burgeoning industry because voters may not give legislators much time to devise the rules.

“We had to implement laws retroactively on an industry that had already sprang up,” he said.