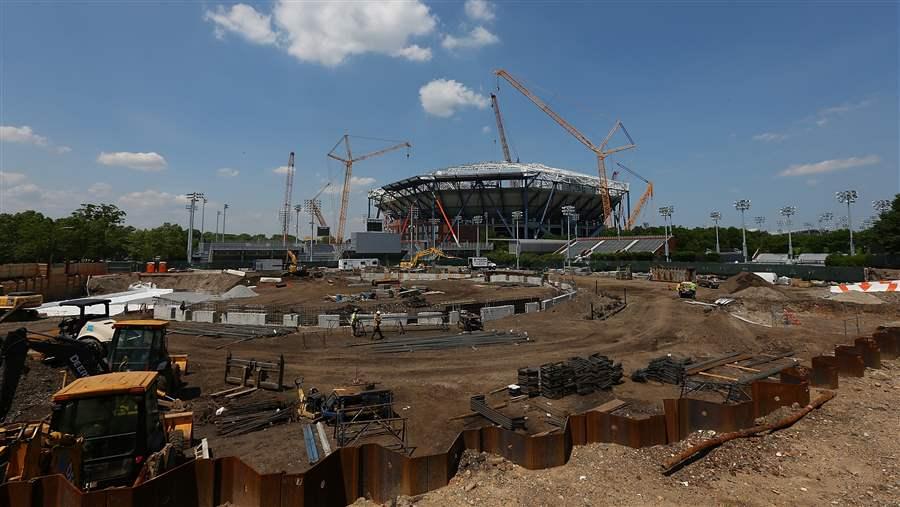 A view of the Grandstand at the USTA Billie Jean King National Tennis Center in Queens, New York on June 10, 2015.

Anita Sharma, a manager at The Pew Charitable Trusts, researches and analyzes the fiscal health of America’s largest cities.

Kate Davidoff, a senior associate at The Pew Charitable Trusts, researches and analyzes the fiscal health of America’s largest cities.

Beginning in December, new financial reporting standards will require state and local governments to disclose the annual cost of tax incentives they approve to attract and retain businesses and create jobs.

As more states and cities examine the costs and benefits of tax subsidies, the new rules will allow taxpayers and investors to take a closer look, too.

The Government Accounting Standards Board, an independent nonprofit that sets financial reporting standards for state and local governments, approved the new rules in August, and they will take effect December 15. Currently state and local government officials do not report the tax revenue they lose from these programs in a consistent manner. The latest disclosure requirements apply to tax abatements in which a state or local government agrees to reduce a business’s taxes in exchange for benefits such as jobs or other investments such as building infrastructure that stimulate the local economy.

The accounting board, better known by its acronym GASB (“Gaz-bee”), has moved on several fronts in recent years to improve clarity, consistency and transparency in the financial data that governments collect. For example, the board now requires states, cities and counties to report a more realistic estimate of their public pension liabilities—what they owe retirees over time—than they previously did.

Under the standards approved in August, officials will need to report the purpose of the tax incentive program, list the tax abatements being awarded, note any provisions made to recapture the lost revenue, and disclose all of the commitments made between the businesses and the government.

State officials also will be asked to account for reductions in the state’s tax base from agreements made between local governments and businesses. Because of the lag in the way officials prepare financial statements, the data will become available in 2017.

Not only will local officials disclose an estimate of their own lost revenue, but the rule also requires governments to report any offsetting payments received from other governments due to disclosure agreements.

For example, if a state provides funding to local governments that offer property tax breaks to businesses, local officials will have to report the amount of the state aid on their financial statements. In this way, state and local officials, taxpayers and investors will better understand the true cost of a tax incentive program. Local officials also must divulge some information about when companies fail to meet job creation or other pledges, although not specific details of how much, if any, total revenue was recovered from the businesses in this scenario.

Many view GASB’s new rules as an important first step, but critics have highlighted some shortcomings. For example, the reporting standards only provide broad information about incentive programs without requiring state and local officials to give details about individual subsidies which would present a more complete understanding of the cost of the abatements. States and local officials are allowed to aggregate the total amount of lost revenue instead of disclosing information about specific subsidies or naming the companies. The standards also do not require disclosure of how many new deals a local government may have completed, whether a program has ended or its terms have been changed, or ask officials to list future costs of incentives, most of which are long-term.

GASB’s initial proposal included these standards but the board omitted them from the final rule after state and local government officials said they might violate confidentiality agreements with the businesses.

Another concern is that the GASB rules center on the costs of the subsidies without including the potential benefits. “I think it’s definitely a start. But this just should not be the user’s only source of information,” says Melinda Gildart, chief financial officer for the Illinois Finance Authority.

Given that many tax abatements are awarded by cities and counties of varying size, some local governments may face challenges complying with the disclosure requirements. In particular, smaller governments may not have people trained to determine what counts as a disclosure.

Some local governments may also have to adjust their schedule to report the abatement program data each fiscal, instead of calendar, year. And some local officials have questioned how information from various government offices will be coordinated to meet the new disclosure requirements, even if the information is already being collected, says Arthur Fish, incentives coordinator at Business Oregon, the state’s economic development agency.

Despite the limitations of the rule and its potential challenges, GASB’s standards encourage state and local governments to clearly define the purpose of their incentives and systematically collect data on them for the first time.

Nevertheless, the new rules will encourage state and local policymakers to rigorously consider the structure of tax incentive programs and conduct evaluations to determine how well they are working.

From 2012 to 2014, 10 states and the District of Columbia approved laws requiring regular evaluation of incentives or improving the existing assessment process. In the first half of 2015, Maine, Minnesota, Nebraska, North Dakota, Oklahoma, Tennessee, and Texas enacted laws requiring regular evaluation of tax incentives. The Pew Charitable Trusts has worked with several states to help policymakers recognize the budget risks and economic returns of tax incentives.

Complete details on the standards are on GASB’s web site, www.gasb.org.

On Oct. 30, 2014, the Government Accounting Standards Board (GASB), a nonprofit organization that sets financial reporting standards that nearly all state and local governments conform to, proposed a rule that would redefine generally accepted accounting principles in order to increase transparency around tax incentive, or abatement, programs. The Pew Charitable Trusts, which works with states to measure the costs and benefits of incentives and make them more predictable, examined the rule, particularly as it relates to transparency and to the ability of jurisdictions to implement the requirements.