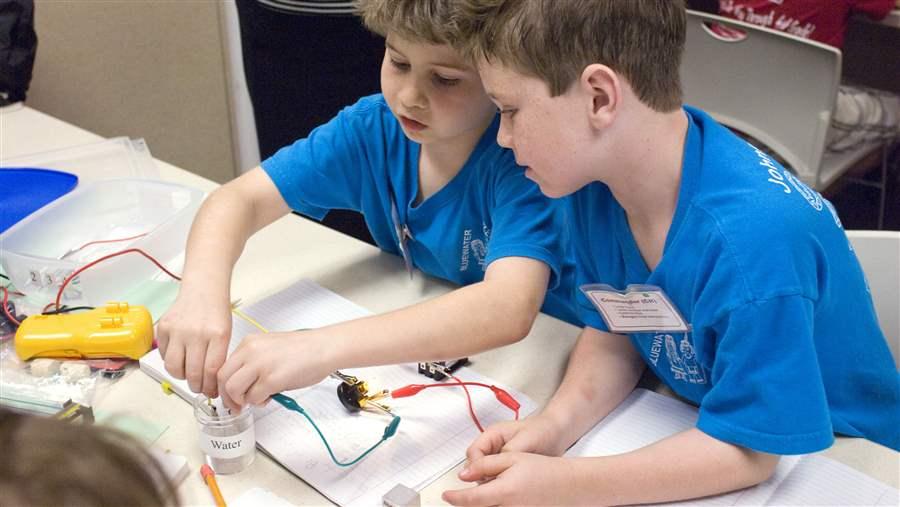 Florida elementary school students work on an electricity project in a lab funded by a grant from the Department of Defense. States are trying to maximize the federal grants that go to state agencies and nonprofits.

With about $550 billion in federal grants going to state and local governments annually—funding everything from police equipment to wildlife management—the challenge for each state is to maximize its share of the federal money.

That means making sure they apply for every grant available, ensuring that all citizens who qualify for programs get them, and centralizing grant operations to make certain that they aren’t overlooking potential funds and that departments aren’t competing with one another for the money.

Federal money makes up about one-third of state budgets. Some states have had more success than others at leveraging federal dollars, but all are trying to get better, according to organizations and study groups that monitor the grants. Maryland is considered so good at it that the state has a conference each year to pass on tips to others. And some states, such as Nevada, are taking concrete steps to improve.

According to the Federal Funds Information for States (FFIS), which helps states manage their federal funds, states can use several strategies to maximize the federal money they receive:

“Once a state is aware of potential opportunities, it is in a better position to decide if it wants to pursue the funding,” FFIS said in a 2014 report, “Is Your State Maximizing Federal Funds?”

According to the Congressional Budget Office, about two-thirds of the funds the federal government sends to states take the form of “mandatory grants,” meaning that if people qualify for the federal money, they get it. Most health programs, including Medicaid, the largest, fall into that category.

Maryland’s grants office, which focuses mostly on those discretionary grants, has been lauded by FFIS and the National Governors Association for its work in coordinating grant applications and tracking how federal grants are spent once they reach the state.

Merril Oliver, director of the Maryland Governor’s Grants Office, said her agency reaches out to the top and bottom of state agencies to reach the workers in charge of grant operations. It also brings in nonprofits that get federal grants, to help them navigate the process. Oliver said the governor’s office provides the resources for her agency to coordinate with every state cabinet secretary.

“It is incumbent upon us to maximize the return on investment for Marylanders who pay federal taxes,” she said. “The only way we can attain a return for them is through federal grant programs.”

The Maryland model has transcended Democratic and Republican governors. It was begun in 2004 under former Gov. Robert Ehrlich, a Republican, continued through the administration of former Gov. Martin O’Malley, a Democrat, and is now in use under Gov. Larry Hogan, another Republican.

Maryland hosts a national conference every year to teach state agencies and private nonprofits how to go after federal money. While the states may compete with each other later for grants, at least they go into the process better armed.

Maryland also is good at keeping track of the federal dollars it gets. The state was listed as No. 3 in an audit of federal funds conducted by the federal Office of Management and Budget (OMB) for fiscal year 2012, having only a very small number of problems for every billion dollars granted. California ranked first in that assessment.

“We’re pretty darn good at making sure the money is spent for its intended purpose and we have strong internal controls over how those funds are managed,” Oliver said.

In Maryland, 32 percent, or $11.6 billion, of the state budget comes from federal funds, she said. Eighty-five percent of that money comes from the federal Health and Human Services, Transportation and Agriculture departments. In total, Maryland took in $112 billion in federal funds in fiscal year 2014, including grants, contracts to companies in the state and wages to federal employees who live there, she said.

Oliver said her office also trains workers in how to manage federal dollars and comply with program requirements. “We reach out to stakeholders to determine how the needs are being met and report back to the federal government,” she said. “Building a strong positive relationship with the funding source is critical to success.”

The amount the federal government sends to states has swung back and forth since the Great Recession began in 2008, according to research by The Pew Charitable Trusts. (Pew also funds Stateline.) Federal grants to states increased by 54 percent under the American Recovery and Reinvestment Act of 2009, but by 2012 they had dropped 29 percent from that peak, then began climbing again in 2014.

Overall, from 2008 to 2015, total federal grants to states increased by 30 percent on an inflation-adjusted basis, the research found. Increases in Medicaid payments to states were the main driver of that growth.

Federal grants to state and local governments for Medicaid increased from 2.4 percent of total federal spending in 1980 to 7.6 percent in 2011, according to the Government Accountability Office (GAO), the federal government’s watchdog agency. The higher spending on Medicaid and other health programs over that period was offset by lower spending for grants targeted for areas such as transportation, education and regional development.

Measured per capita, the District of Columbia gets the most money from federal grants tracked by FFIS, at $4,343 per person. What’s more striking is that Alaska comes in second with $3,436 per capita, followed by Wyoming, New York and Vermont.

While it’s up to the states to do on-the-ground monitoring of the grants they receive, the federal government is also watching. But the GAO found in a September 2012 report that federal agencies were not keeping track of federal grants sufficiently.

With so much at stake, states are increasingly trying to do better at the grant process.

Nevada ranked in the bottom third of states in the Office of Management and Budget’s 2012 assessment of how they obtain and manage grants and next to last in the FFIS ranking of per capita grant spending. But the state has been moving to address the situation, according to Sheila Lambert, chief of grant management for the state.

Her office was established by Republican Gov. Brian Sandoval and the Legislature in 2011, with the goal of getting more federal grant money into the state. It looks over the landscape of available federal grants, sorts the notices and sends them out to all state cabinet departments, Lambert said. “We make sure we’re not competing with ourselves in Nevada,” she said.

The result: “Over the last year and a half, we have brought in $100 million in new discretionary funding we had not received before,” Lambert said. That translates to a 17 percent increase in discretionary grants during that period, she said.

Hawaii ranked near the middle of the pack in receipt of federal grants, and last in the OMB assessment of grants management, and the state has been trying to update its grant management system. Dolores Cook, head of the grants management office for the Hawaii Department of Defense, which handles all Homeland Security program grants, said she is trying to get the rest of the state to coordinate all grants in a separate office. Meantime, she has sponsored a grants management course for all state programs.

“I think it is now more important than ever to consolidate grant management activities,” she said.