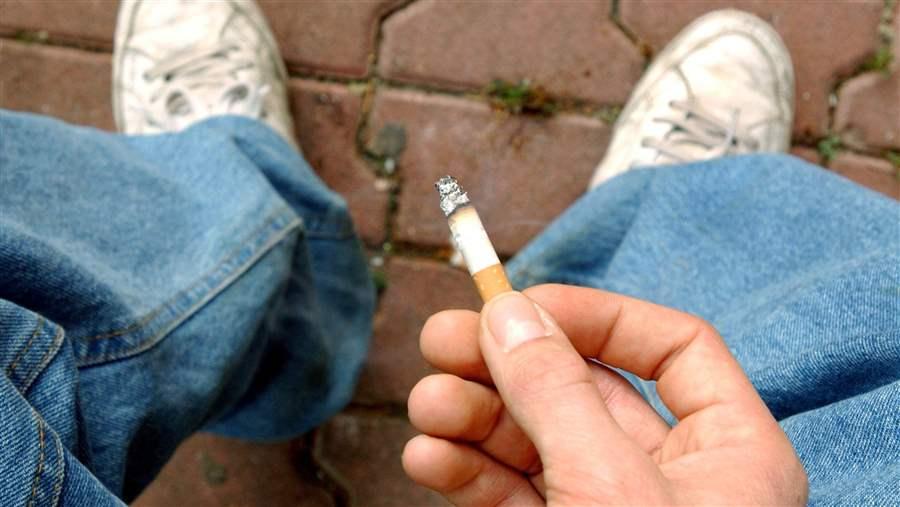 Nearly a dozen states have considered bills this year to boost the legal age for buying tobacco products.

While a growing number of states have turned their attention to marijuana legalization, another proposal has been quietly catching fire among some legislators—raising the legal age to buy cigarettes.

This summer, Hawaii became the first state to approve increasing the smoking age from 18 to 21 starting Jan 1. A similar measure passed the California Senate, but stalled in the Assembly. And nearly a dozen other states have considered bills this year to boost the legal age for buying tobacco products.

“It really is about good public health,” said Democratic Hawaii state Sen. Rosalyn Baker, who sponsored the legislation. “If you can keep individuals from beginning to smoke until they’re at least 21, then you have a much greater chance of them never becoming lifelong smokers.”

Supporters say hiking the legal age to 21 not only will save lives but will cut medical costs for states. But opponents say it would hurt small businesses, reduce tax revenue and violate the personal freedom of young adults who are legally able to vote and join the military.

Measures to raise the smoking age to 21 also were introduced this year in Massachusetts, New York, Oregon, Rhode Island, Utah, Vermont, Washington and the District of Columbia, according to the Preventing Tobacco Addiction Foundation, an advocacy group aimed at keeping young people from starting to smoke. Iowa and Texas considered measures to increase the legal age to 19. None of those bills passed. And just last week, a Pennsylvania legislator introduced a bill to up the minimum age there to 21.

In almost every state, the legal age to buy tobacco products is 18. Four states—Alabama, Alaska, New Jersey and Utah—have set the minimum at 19.

Anti-tobacco and health care advocates say that hiking the smoking age to 21 is a fairly new approach in their effort to reduce young people’s tobacco use. Until recently, research on the topic has been somewhat limited, they say.

That hasn’t stopped a growing number of local governments from taking action on their own in the last few years. As of late September, at least 94 cities and counties, including New York City, Evanston, Illinois, and Columbia, Missouri, had passed measures raising the smoking age to 21, according to the Campaign for Tobacco-Free Kids, an advocacy group that promotes reducing tobacco use.

One of those communities is Hawaii County, the so-called “Big Island” of Hawaii, where the law changed last year after a grassroots effort by health care advocates, anti-smoking groups and local high school students. That coalition, joined by teens from across Hawaii, continued its fight at the state level, and legislators heard the message, said Sen. Baker, whose bill also included e-cigarettes, battery-powered devices that deliver vaporized nicotine, which have become popular among young people.

Supporters of raising the smoking age to 21 say that a turning point was a March report by the Institute of Medicine, the health arm of the National Academies of Sciences, Engineering and Medicine, which predicted that raising the age to 21 would cut smoking by 12 percent by the time today’s teenagers are adults. It also would result in about 223,000 fewer premature deaths.

The institute’s report also supported health care advocates’ argument that preventing or delaying teens and young adults from experimenting with smoking would stop many of them from ever taking up the habit. About 90 percent of adults who become daily smokers say they started before they were 19, according to the report.

“Raising the age to 21 will keep tobacco out of high schools, where younger kids often get it from older students,” said John Schachter, state communications director for the Campaign for Tobacco-Free Kids. “If you can cut that pipeline off, you’re making great strides.”

“If we make it a law to drive with your seatbelt on to protect the consumer, or to require helmets for people on motorcycles, why can’t we raise the smoking age to protect young adults from becoming addicted to tobacco?” he said.

Supporters also point out that 21 became the national legal drinking age after President Ronald Reagan signed legislation in 1984 that forced states to comply or risk losing millions of dollars in federal highway funds. That has resulted in reduced alcohol consumption among young people and fewer alcohol-related crashes, national studies have found.

“President Reagan thought young people were not ready to make this decision to drink or to drink and drive before they turned 21,” said Rob Crane, president of the Preventing Tobacco Addiction Foundation. “Smoking kills more than six times as many people as drinking.”

Opponents say that raising the smoking age to 21 would have negative consequences for businesses, taxpayers, and 18-year-olds who should be free to make a personal choice about whether they want to smoke.

Smokers’ rights groups, retailers and veterans’ organizations are among those who’ve opposed such legislation.

“If you’re old enough to fight and die for your country at age 18, you ought to be able to make the choice of whether you want to purchase a legal product or not,” said Pete Conaty, a lobbyist for numerous veterans groups who testified against the California bill. “You could enlist in the military, go to six months of training, be sent over to Iraq or Afghanistan and come back at age 19½ to California and not be able to buy a cigarette. It just doesn’t seem fair.”

Opponents say it’s wrong to compare cigarettes with alcohol. “If you smoke one or two cigarettes and get behind the wheel of a car, you’re not driving impaired,” Conaty said.

Opponents also say taxpayers would take a financial hit if the smoking age is raised because it would mean less revenue from cigarette taxes.

In New Jersey, where a bill to hike the smoking age to 21 passed the Senate last year and remains in an Assembly committee, a legislative agency estimated that tax revenue would be reduced by about $19 million a year.

In California, a fiscal analysis by the Senate appropriations committee estimated that raising the age to 21 would cut tobacco and sales tax revenue by $68 million a year. That would be offset by what the analysis said could be “significant” health care cost savings to taxpayers—reaching as much as $2 billion a year.

Stores that sell tobacco products and e-cigarettes also fear the effect. The Hawaii Chamber of Commerce opposed the measure there.  And Bill Dombrowski, president of the California Retailers Association, suggested that raising the smoking age would simply drive young people to the black market.

“If you raise the age, people under 21 will find the cigarettes somewhere else,” he said.

Cigarette smoking is the leading cause of preventable death in the U.S. and is responsible for more than 480,000 deaths a year, according to a 2014 U.S. Surgeon General report, which said the direct medical costs of smoking are at least $130 billion a year.

Supporters of the 21 smoking age say that the savings in health care costs, especially through Medicaid, the federal-state health insurance program for the poor and disabled, will far outweigh any loss in tax revenue for states.

Schachter and other advocates say Hawaii’s action, along with that of dozens of cities, will help spark legislation in other states and create a new standard for when young people take their first puff.

“There is momentum on this issue, and I think you’re going to see more and more states and cities moving in that direction,” Schachter said.