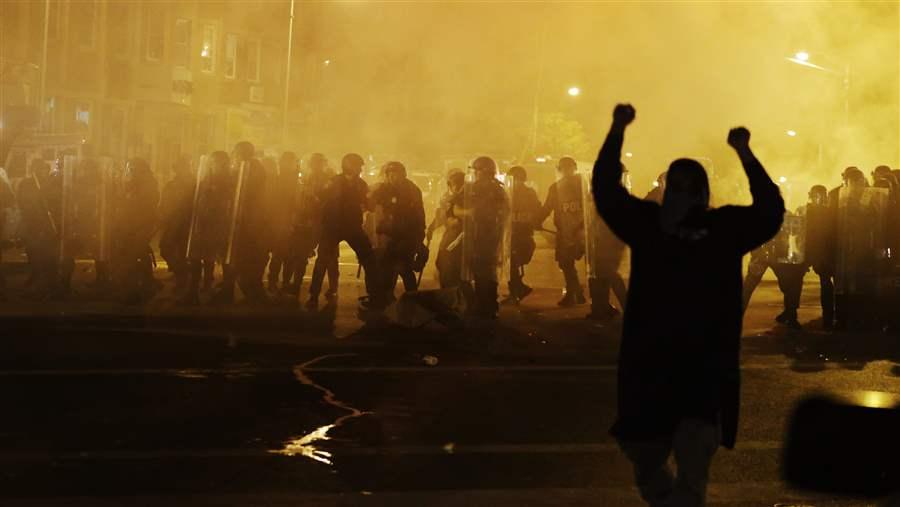 Johns Hopkins University and the Hopkins health system said the upheaval in Baltimore last April, which revealed the depths of economic misery in the city, lent urgency to the major jobs, contracting and purchasing initiative they announced last month. Other hospitals around the country have also launched anti-poverty efforts.

Whether there was any truth behind those stories—Hopkins has always denied them—hardly mattered. The mythology lived on and, combined with the hospital’s very real development decisions, contributed to a persistent view of Hopkins as an imperious, menacing presence amid the largely poor and African-American neighborhoods surrounding it.

“Hopkins was viewed with a great deal of suspicion and anger,” said Miles, who graduated from the school in 1970 and is the bishop of Koinonia Baptist Church in northeast Baltimore.

But now, Miles says, that perception could be changing. Johns Hopkins University and the Hopkins hospital and health system have launched an ambitious initiative to fill many more jobs with residents from distressed Baltimore neighborhoods, boost the use of minority contractors and vendors from those areas, and require their partners to follow their lead.

The goal is to help alleviate the stubborn poverty laid bare in the spring, during the upheaval that followed the death of Freddie Gray, a young African-American man, while in police custody. And it comes at a time when other hospitals—spurred in part by the tax code and a little-noticed provision of the Affordable Care Act that requires hospitals to help improve the health of their communities—are tackling health, employment, education and housing problems in their neighborhoods.

“I think it is a confluence of the ACA requirements and a motivation to do good,” said Erika Poethig, director of urban policy initiatives at the Urban Institute. “There has been building momentum and a healthy competition between hospital systems that are trying to develop pathways to employment or other kinds of community investment.”

The Hopkins initiative, announced last month, had been in the works for some time, but officials say it took on increased urgency after the rioting. “The unrest in Baltimore shed light on the racial and economic disparities that challenge our city,” Ronald Daniels, president of the university, wrote to faculty and staff last month. As a result, he said, the university and health system are redoubling their longstanding efforts, “knowing that the health and well-being of Johns Hopkins are inextricably tied to the physical, social and economic well-being of Baltimore.”

Other hospitals across the country also have shown a greater inclination to address poverty in their communities in recent years.

“In many places, hospitals give the impression that they are in a community but not of a community,” said Marc Morial, president of the National Urban League. “But we are seeing more hospitals becoming more intentional about building bridges to these communities—through employment, through education, through philanthropy.”

Most large hospitals operate health clinics in low-income communities. But more and more, in places as varied as Detroit, New York City and Waco, Texas, hospitals have instituted programs that are not strictly medical, but are instead intended to lift communities out of poverty.

Examples abound. In 2015, the Cleveland Clinic raised the minimum wage for its employees to $12, well above Ohio’s $8.10 minimum wage. It contributed $500,000 to the removal of abandoned homes. It runs a number of internship and education programs for low-income and minority students to introduce them to work in the health care field. (Nearly a third of the participants in one such program went on to graduate from two- or four-year colleges.) The hospital is also making up to $2 million available to help employees purchase or renovate homes in the neighborhood.

The Hospital of the University of Pennsylvania has enrolled about 100 West Philadelphia high schoolers in a two-year program in which they work in the hospital, receive job training in medical fields, and take community college courses. All of the program’s 2015 graduates also graduated from high school (versus 70 percent for all Philadelphia public school students). The program recently expanded to include children from all four high school grades. Massachusetts General Hospital in Boston has a similar program.

The University of Chicago Medical Center and its parent, the University of Chicago, have steadily increased the number of employees from the low-income area where they are located. One-third of its employees now come from the mid-South Side, and they account for nearly 40 percent of salaries paid. Another Chicago hospital, Mount Sinai, runs an after-school program for middle school students, giving them a safe haven from the dangerous South Side streets.

In Boston, Mass General, Children’s Hospital and others work with partners to find stable housing for low-income patients, including pregnant women. Boston Medical Center and Beth Israel Deaconess both have programs to make healthy foods available in low-income communities.

Hospitals that have undertaken these efforts say they are motivated by a commitment to support their communities. But such programs are also an outgrowth of federal tax policy as well as the requirements of the Affordable Care Act.

In order to retain tax-exempt status, nonprofit hospitals are required to demonstrate charitable investment in their communities. In the past, they were largely able to fulfill that requirement by providing uncompensated medical care to uninsured patients.

But the ACA has greatly reduced the ranks of the uninsured. That shift will require hospitals to find other ways to demonstrate their good citizenship, said Neil Kleiman, an urban policy professor at New York University.

The ACA also includes a provision that requires hospitals to assess their community’s health needs and formulate an action plan to meet them. The plans may involve conventional medical care in free clinics, but the requirement has also been interpreted to include other steps, such as the creation of green spaces, jobs programs, education and pipelines for getting healthy foods into areas that are not served by grocery stores.

Janice Guhl, of the Cleveland Clinic, said a number of the hospital’s programs predate the ACA requirements, and that it undertook the education and housing programs because the clinic believes strongly in supporting its surrounding communities. To meet the ACA rules, she said the hospital has initiated other programs that are more directly health-related.

Hospitals can be a crucial participant in anti-poverty efforts, Kleiman said. Often, they are one of the major employers in a community, particularly in urban areas that have experienced an exodus of employers. They also have a wide variety of jobs requiring different levels of skills and at different income levels, providing the possibility for advancement.

A Force in Baltimore

Few institutions bestride their communities the way Hopkins does. With 52,000 employees in the Baltimore area, and many satellite operations, the school and health system are by far the region’s largest private employer. Over the last two decades, the hospital has launched various initiatives to help surrounding communities, including anti-violence programs and the hiring of ex-offenders, but it wasn’t enough to alter the community’s negative view of Hopkins.

But Miles and many others in Baltimore say Hopkins is now deepening its commitment to the city in a way that promises to have a farther reaching impact.

It has pledged to increase hiring in Baltimore’s most distressed neighborhoods, from 26 to 40 percent of total employment, and to require the same of its vendors and contractors. It also plans to increase purchasing from Baltimore businesses by $6 million over three years, up from $56 million, and to increase the participation rate of minority contractors in construction projects and in purchasing.

Hopkins’ commitment has reverberated widely in the city. “It’s the first time in my memory that a corporate institution in Baltimore has stepped up in such a major way,” said Miles.

For much of its history, the hospital was viewed by Baltimore’s black community as a neighborhood bully that uprooted residents from their homes to make way for hospital expansions, which it then surrounded with fortress-like walls. More recently, the 2010 best-selling book, The Immortal Life of Henrietta Lacks, revealed how tumor cells taken from an impoverished black woman by a Hopkins doctor in 1951 were used to develop medical treatments that generated hundreds of millions of dollars, none of which found their way back to Lacks or her descendants.

But now, people are more open to seeing Hopkins as a solution to the problems bedeviling Baltimore. “This is a true cultural shift,” said Rob English, lead organizer for Baltimoreans United in Leadership Development, a nonprofit co-chaired by Bishop Miles that works to improve housing and boost employment in impoverished areas of the city. “I’m not sure most people at Hopkins even realize the enormity of this precedent yet.”