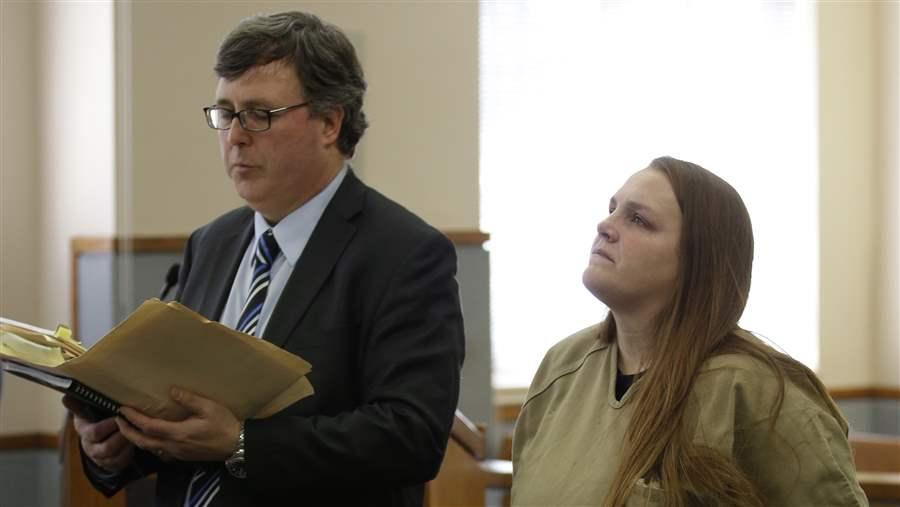 Tamica Jeffers was charged with two counts of child endangerment after Ohio police say she overdosed on heroin while her children were nearby. State officials say the opiate epidemic is a reason more children are landing in foster care.

Timothy Dick’s office receives all kinds of reports of child abuse and neglect. Perhaps a child has a broken bone, or is underfed, or has been left home alone for too long.

But when caseworkers drive to the child’s home to investigate, they often discover the same root cause. “What we’re finding more and more is that the parents are addicted to opiates. And more often than not, it’s heroin,” said Dick, assistant director of child protective services in Clermont County, Ohio.

In Ohio and other states ravaged by the latest drug epidemic, officials say substance abuse by parents is a major reason for the growing number of children in foster care. In Clermont County, east of Cincinnati, more than half the children placed in foster care this year have parents who are addicted to opiates, Dick said.

But she suspects that most cases do: “That’s what all the caseworkers and judges are saying.”

Numbers emerging from the states show how rising heroin use is putting pressure on child-welfare systems.

In Ohio, 23 percent of child-welfare cases investigated in 2013 involved heroin or cocaine, up from 19 percent in 2010, state records show. Seventy percent of children less than a year old who were placed in foster care that year had parents who were using those drugs, according to the Public Children Services Association of Ohio (PCSAO), a coalition of county child-welfare agencies.

In neighboring Indiana, Republican Gov. Mike Pence linked the spike in children moving through the child-welfare system—18,925 as of July—to drug abuse, especially of heroin, and hired 113 new caseworkers this year to help handle the load.

And in Vermont, substance abuse was cited in more than a third of phone calls to the state’s child-protection hotline. Last year, 1,326 Vermont children were in state custody, up 33 percent in one year.

“Young children are coming into state custody in unprecedented numbers. This is primarily being driven by parental heroin use,” writes Cindy Walcott, Vermont’s deputy commissioner for family services.

Social workers point out that drug abuse does not always result in child neglect. But parents might be so consumed by addiction that all they think about is getting high.

Officials in the three states say child-welfare cases that involve drug addiction are particularly challenging because parents have limited time to prove that they’re able to safely care for their children and get them back.

But kicking a drug habit—particularly when the drug is heroin—can be a lifelong battle.

Federal law requires that a child be reunited with his family or put up for adoption after spending 15 consecutive months in foster care (or any 15 over a 22-month period). “As soon as the child-protection agency files the case with the court, the clock starts ticking,” said Angela Sausser, executive director of PCSAO.

Many parents can’t recover in time. Relapse is common with opioids and heroin, Sausser said. And that’s assuming parents can start drug treatment. Waiting lists are often long in Ohio and Vermont, particularly for intensive services like clinics where parents can detox with the help of medication.

When a parent has to wait three to six months simply to enter a treatment program, that’s critical lost time, Sausser said.

Several states are tackling the problem by expanding addiction services.

The Ohio agency’s services are administered locally. Since the state expanded Medicaid under the Affordable Care Act, local boards have been able to take money that used to go to assisting uninsured residents and shift it toward nonmedical services, such as drug-free residential housing for recovering addicts.

Young, of the national substance abuse center, backs the expansion of the kind of hands-on, and often small-scale, programs that have been adopted in some states. In Illinois, three counties are served by a “recovery coach” program paid for by a federal funds and administered by a nonprofit. Parents get help navigating addiction treatment and additional support, such as parenting classes and help finding jobs and housing.

Specialized court dockets, such as family drug courts, can also help. Ohio’s Supreme Court has certified such dockets in 20 courts. Participating families go to court every week or two, along with their caseworkers from child protective services and their drug treatment provider, so the court can check up on them. The extra accountability pushes parents into treatment faster, and helps them complete treatment and reunite with their children, Dick said.

Vermont is expanding a program that wraps more support around parents. The state Department of Children and Families divides the state into 12 districts. In six of them, when caseworkers go out to a home to investigate a possible case of child abuse, a social worker from the Lund Family Center, a nonprofit based in Burlington, goes with them.

“Our staff goes out on that first call and screens the family for substance abuse right then,” said Kim Coe, director of residential and community treatment at Lund. Lund staffers help get parents spots in treatment programs and try to ensure that they actually start treatment, whether that means offering encouragement or finding transportation to their first appointment.

Although a Lund screener only monitors the parent until he or she enters treatment, that’s enough to improve outcomes for families, Coe said. If the Vermont Legislature approves the necessary funds, she said, the program will expand to serve the whole state.

Over the years, community organizations, states and the federal government have tested new approaches.

Those that serve families best, Young said, help parents get into treatment and stay sober. Often, such approaches bring together everyone involved, from child-welfare caseworkers to the judge overseeing the case. “We now know what works,” she said.