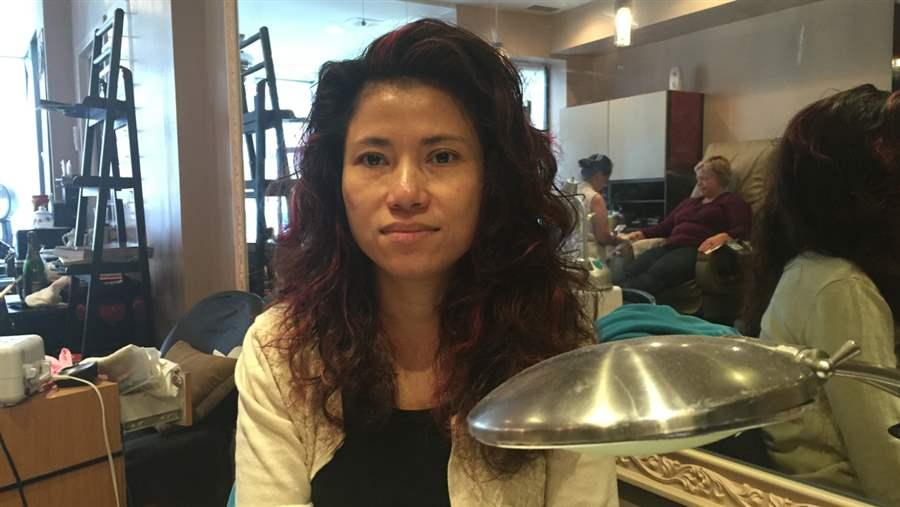 Pranee Wilcox, a native of Thailand, immigrated to the U.S. 14 years ago to work in the Thai embassy as a housekeeper. Her journey belies the stereotype of the “model minority.”

Back home in Bangkok, Pranee Wilcox worked as an accountant for Thailand’s Ministry of Defence. But even with a bachelor’s degree, the divorced mother of two struggled. So in 2001, when the Thai ambassador offered her a job as his housekeeper in the Washington, D.C., embassy, she said yes—even though that meant leaving her babies behind. She figured she’d make much more money working abroad.

Four years later, when the ambassador returned to Thailand, Wilcox decided to stay, although that meant living in the U.S. without papers and with very little English. Desperate for money, she said she worked 12-hour days, six days a week, first as a cook, then as a nail technician, so she could send money back to her family.

“I still feel like I’m not a success yet,” said Wilcox, 44, taking a break from her mani-pedi duties at a D.C. salon. She said her goal is to become a U.S. citizen.

Over the past decade, Asians and Pacific Islanders have become the fastest-growing group to enter the U.S., outpacing Latinos. And new data from the Pew Research Center show they are projected to become the biggest immigrant group by 2055. (Pew also funds Stateline.)

Asian immigrants come from countries all over that vast continent, from Afghanistan to China, India to the Philippines, Samoa to Vietnam. As a whole, Asian-Americans and Pacific Islanders are highly successful, the most educated, highest-earning racial group in the U.S., making for the stereotype of the “model minority.”

But dig a little deeper, and the Asian success story looks more complex. The immigrants represent 30 countries and 100 languages, and their ability to access opportunities in the U.S. varies dramatically, depending on the circumstances that brought them here and where they landed. Some groups struggle, drop out of school at higher rates and need a variety of social services such as language classes, mental health services and food stamps. Some have difficulty accessing those services.

Social scientists say dubbing Asian-Americans the “model minority” can hurt some of them who are finding the American Dream elusive—and it can drive a wedge between them and other minority groups.

“There is a danger in homogenizing the Asian-American experience,” said Karthick Ramakrishnan, professor of public policy and political science at the University of California, Riverside and co-founder of AAPI Data, which tracks policy-related data about Asians and Pacific Islanders.

Policymakers, Ramakrishnan said, often “don’t recognize that there might be hundreds of thousands of individuals within the Asian category who are facing language barriers, living in concentrations of poverty, who don’t have access to health care. Their experiences are rendered invisible in many ways. Their experience isn’t seen as the quintessential Asian experience.”

Of the 16.6 million Asians and Pacific Islanders living in the U.S., nearly two-thirds are foreign-born, according to the White House Initiative on Asian-Americans and Pacific Islanders. One-third of the 1 million legal immigrants who enter the U.S. annually come from Asia. And an estimated 1.3 million of the 11.5 million undocumented immigrants in the U.S. are Asian, according to the Department of Homeland Security.

Much is made of the success of many Asians in education, in Silicon Valley and in the medical profession. But for others, life here is much harder.

About 14 percent of elderly Asians live in poverty, nearly twice the rate of whites, according to AAPI Data. Some of them who are noncitizens may not be eligible for Social Security.

Finding adequate housing poses challenges for many Asians, particularly in high-rent states like California or New York. One in five Asians and Pacific Islanders experiences housing discrimination. Asians also experienced the largest decline in homeownership in 2008, as the mortgage crisis hit.

According to a 2013 report by the National Coalition for Asian Pacific American Community Development, the number of poor Asians increased 38 percent between 2007 and 2011, in the wake of the Great Recession. Only Latinos experienced a greater increase in poverty. Many of the Asian poor are concentrated in pockets in the West and in New York, the report found.

Economic disparities are a particular problem among Bangladeshis, Cambodians, Pakistanis and Hmong, many of whom arrived in the U.S. as refugees. For example, the Hmong, who largely settled in Minnesota and California, have the highest poverty rate of any Asian subgroup in the country, according to the White House Initiative. Pacific Islanders have among the highest rates of unemployment of any racial or ethnic group in the country, according to the U.S. Department of Labor.

Language can pose a barrier to advancement. A third of Asians do not speak English fluently, the Labor Department found. (Limited English skills also make it difficult to get adequate health care, demographers say.) Southeast Asian immigrants drop out of school at surprisingly high rates: 40 percent of Hmong; 38 percent of Laotians and 35 percent of Cambodians do not graduate high school, according to the White House Initiative.

And there are disparities among groups that are successful. The first wave of Indians, who immigrated in the 1970s, generally consisted of highly skilled professionals, according to Ramakrishnan. Those who arrived in the ’80s on family visas tended to be less educated or found it difficult to land jobs that matched their skills, and ended up working as taxi drivers or convenience store clerks, he said.

Chinese investors in California frequently buy up multiple houses in Los Angeles because they need a tax shelter and bring their poorer relatives in to work in their businesses, said Melany De La Cruz-Viesca, a demographer and interim director of the UCLA Asian-American Studies Center.

The median household income for Hmong-Americans is $52,500, close to the national average, but the childhood poverty rate is a staggering 54 percent, according to the Center for American Progress, a liberal research group based in Washington, D.C. One reason for the disparity: Often, several generations live within one refugee household, with aunts, uncles and grandparents all living under one roof, and multiple low-earners contributing to the family income, De La Cruz-Viesca said.

Poorer Asian immigrants can be vulnerable to exploitation, demographers say. Last year, an Asian-owned mega spa in Centreville, Virginia, outside Washington, D.C., one of the largest in the country, was investigated for allegedly holding its Korean and Chinese workers in indentured servitude and running a prostitution ring.

What’s needed is better data that looks more specifically at different groups, so that their needs can be adequately addressed, demographers say.

“If you have just the Asian and the Pacific Islander category lumped together, many of the smaller groups that experience considerably worse outcomes are rendered invisible—or they’re ignored altogether,” Ramakrishnan said.

There’s some truth to the stereotype that Asian immigrants and refugees need less public assistance because their families will take care of them, said Sophorn Cheang, interim manager for the IRCO Asian Family Center in Portland, Oregon. The families look out for each other, with elders staying at home to take care of the children.

“Family unification is really important, because of our traditions and cultures,” said Cheang, who is Cambodian-American. “But that doesn’t mean that they don’t need help.”

Last month, the Obama administration hosted a summit for philanthropic, community and government leaders to figure out ways in which public, private and community partnerships can address the needs of low-income Asian communities. 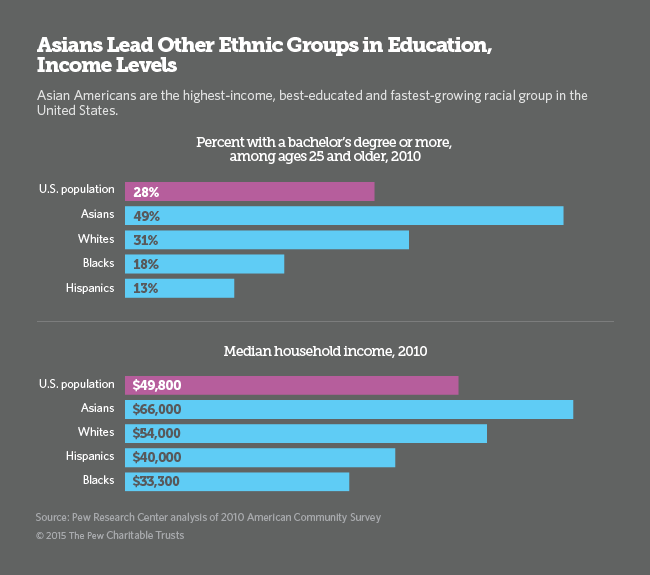 Where you’re from and how you got here can determine your future. Indians, Chinese, Japanese and Filipinos who immigrate tend to be well off and employed in high-paying industries. (Indians have the highest median annual income, $88,000, compared to $49,800 for the overall U.S. population.)

Some come via the “diversity visa,” a lottery system that takes the “best of the best” of educated immigrants from underrepresented countries. Others come on student visas or are sponsored by an employer.

There’s little data tracking the newest wave of refugees from Bhutan, Myanmar and Afghanistan who have been arriving in the U.S. over the past decade, said Randy Capps, director of research for U.S. programs at the Migration Policy Institute. But anecdotally, Capps said, the new arrivals are struggling.

Refugees traumatized by war are frequently poor and in need of mental health and other services, Ramakrishnan said. Without an investment in culturally specific programs, he said, problems have a ripple effect across generations.

Take the case of the Hmong wave of immigrants, primarily rural Southeast Asians who migrated to the U.S. after the Vietnam War. The Federal Reserve tracked two different groups of Hmong, those who ended up in Fresno, California, and those who settled in St. Paul, Minnesota, according to De La Cruz-Viesca.

Fresno is largely rural, with few job opportunities beyond farming and with a limited number of service providers that can address language and cultural barriers. These factors are critical in assisting Hmong-Americans get a higher education, health care, housing or food, De La Cruz-Viesca said. As a result, many are stuck.

Meanwhile, she said, those who settled in St. Paul found help more easily. Minnesota had many active volunteer agencies to help Hmong people when they arrived. The agencies, some of which included church groups, helped them navigate the educational system, and Hmong-American students were able to get into college at higher rates than their counterparts in Fresno, De La Cruz-Viesca said.

Here in the U.S., Wilcox said, she never felt a sense of community with her fellow Thai expats. There are too few of them, and they don’t seem to look out for each other, she said, adding that she didn’t want to insult her people. She didn’t look to them for help when she found herself struggling to get by. Nor did it occur to her to seek out government help like welfare or food stamps once she got her immigration papers in order.

“I don’t know about these things,” she said, adding that she was able to get health insurance through the Affordable Care Act.

But, she said, she found community elsewhere. Wilcox remarried in 2005, this time to an American, which allowed her to get her green card. (Wilcox is her married name.) Armed with her Social Security card and fueled by the encouragement of a Vietnamese nail salon owner, she went back to school to learn to do nails.

Her marriage didn’t last and she misses her children, now 21 and 16. But with her earnings in the U.S., she was able to buy a house for her family back in Bangkok. One day soon, she said, she hopes to become a U.S. citizen, so that she can bring her son here.

That, she said, would make it all worth it.