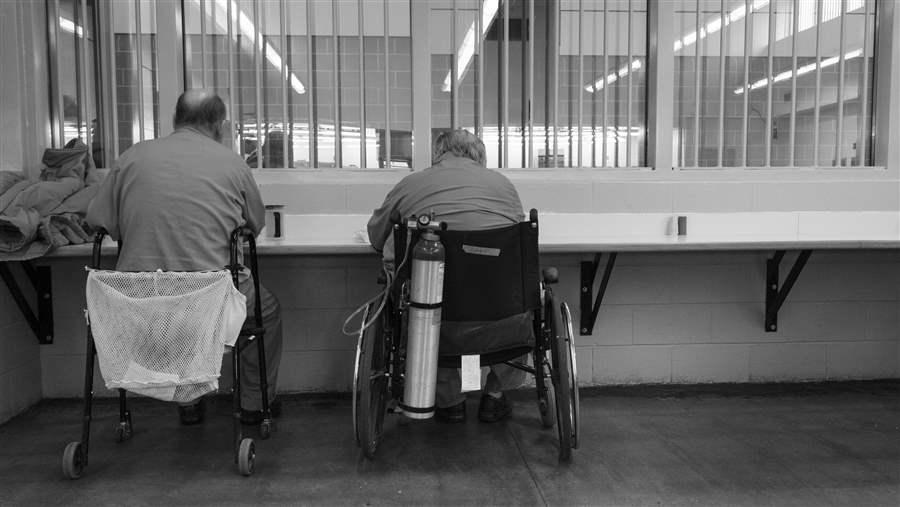 Aging inmates eat lunch in the dining hall at Devens federal prison in Massachusetts on April 21, 2015.

Frances McGaffey, a research associate at The Pew Charitable Trusts, researches and analyzes the fiscal health of states and localities.

In a year when the nation’s overall prison population dropped, the number of older inmates grew rapidly in 2014, continuing a trend that translates into higher federal and state prison health care spending.

New federal data show that from 1999 to 2014, the number of state and federal prisoners age 55 or older increased 250 percent. This compares to a growth rate of only 8 percent among inmates younger than 55, according to the Bureau of Justice Statistics, which also reported that the U.S. prison population fell in 2014 to its lowest level since 2005.  In 1999, inmates age 55 and above—a common definition of older prisoners—represented just 3 percent of the total population. By 2014, that share had grown to 10 percent. 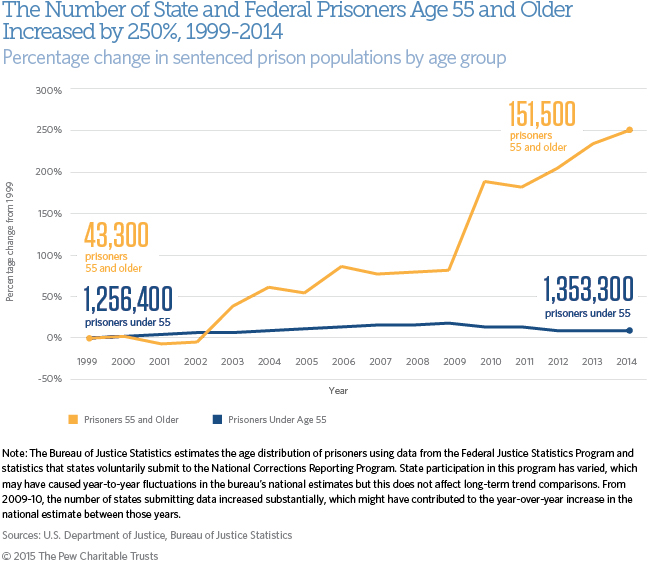 Like senior citizens outside prison walls, older inmates are more likely to experience dementia, impaired mobility, and loss of hearing and vision, among other conditions. In prisons, these ailments present special challenges and can necessitate increased staffing levels and enhanced officer training, as inmates may have difficulty complying with orders from correctional officers. They can also require structural accessibility adaptions, such as special housing and wheelchair ramps. For example, in Florida, four facilities serve relatively large populations of older inmates. These units help meet special needs, such as palliative and long-term care.

Additionally, older inmates are more susceptible than the rest of the prison population to costly chronic medical conditions. In 2011-12, for example, 73 percent of state and federal prisoners age 50 years or older reported to the Bureau of Justice Statistics that they had experienced a chronic medical condition such as hypertension, arthritis, asthma, or diabetes, among others. Younger inmates age 18 to 24 (28 percent) or 25 to 34 (41 percent) were much less likely to have reported such a condition.

All of these challenges create additional health and non-health expenses for prisons, which are constitutionally required to provide adequate medical attention and respond to the unique needs of these inmates.

The National Institute of Corrections pegged the annual cost of incarcerating prisoners 55 and older with chronic and terminal illnesses at, on average, two to three times that of the expense for all other inmates. More recently, other researchers have found that the cost differential may be wider.

At the state level, a July 2014 report by the State Health Care Spending Project, a collaboration between The Pew Charitable Trusts and the John D. and Catherine T. MacArthur Foundation, found that states where older inmates represented a relatively large share of the total prisoner population from 2007 to 2011 tended to incur higher per inmate health care spending.