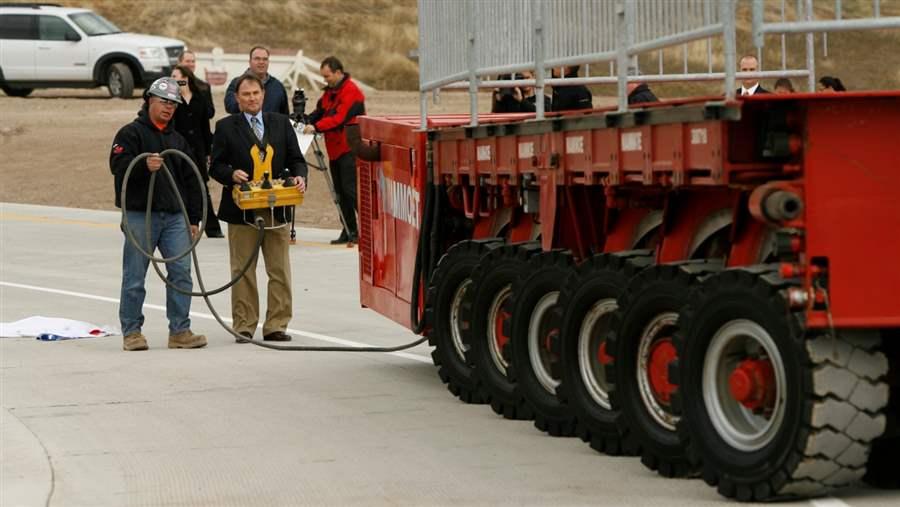 Utah Gov. Gary Herbert operates a self-propelled modular transporter, used to move very large objects, in a ceremony to open a new highway. Utah has been leading the way on putting state funds into transportation projects as federal funds have stalled.

In a conservative Republican state, how does a governor raise taxes, issue bonds and ask local taxpayers to pay even more for transportation? According to Utah Gov. Gary Herbert, you do it by building a coalition of business, industry, churches and educational groups united on one goal: moving people around the state.

“You have to set the table and then you have to deliver,” Herbert, a Republican, said.

“Setting the table” involved at least two years of forging a coalition of interested parties, all of which rely on transportation, to support raising money to build and rebuild Utah’s multifaceted transportation system.

And this year, everyone was called on to “deliver.” In March, Herbert signed a bill passed by the GOP-controlled Legislature that raises the existing 24.5 cents per gallon state gas tax by about 5 cents to pay for state infrastructure projects, despite complaints from some quarters that, because the state has a surplus, it shouldn’t be raising any taxes. The new tax is structured to rise with inflation.

In addition, voters in 17 of 29 Utah counties will be asked in November to approve a 0.25-cent increase in their counties’ sales tax to fund local transportation projects that the state doesn’t pay for, such as city street repairs and local interchanges.

Although nearly every state is struggling to maintain and rebuild its transportation system, Utah is one of only seven states where the legislature this year approved an increase in gas taxes to do it, according to Citizens for Tax Justice, a left-leaning research and advocacy group that focuses on policy. Georgia, Idaho, Iowa, Nebraska, South Dakota and Washington were the others.

Sean Slone, director of transportation and infrastructure policy at the Council of State Governments, a nonprofit research group, says Utah’s method of selling a tax hike wouldn’t necessarily work in all states, but it is a good model for some.

“Part of it is we have good leadership in the [state] House and the Senate,” Herbert said in explaining how he accomplished his goal during a question-and-answer session at the National Press Club in Washington, D.C., recently.

But that’s only part of it. The leadership needed its courage bolstered to vote for an increase in the gas tax, which hadn’t been raised in 18 years. To help build that courage, Herbert and his allies fanned out across the state, roping in business and industry.

“We have great Chamber of Commerce members who say, ‘For us to be successful in business, we have to have infrastructure that works,’ ” Herbert said. “We heard loud and clear from the business community that we need to have a transportation infrastructure that gets us from point A to point B with little discomfort and congestion.

“It made it easier politically, for the Legislature to do it with the support of the business community and the Chamber of Commerce, education and others out there who are stakeholders and endorsed a commonsense adjustment in our taxation for transportation.”

Herbert also had the Statewide Transportation Improvement Plan, which sets out what needs to be fixed or built over the next five years to keep up with growth and prioritizes the requirements for transit, highways, bridges and rural roads in the state. The plan also includes transportation projects in national parks, national forests and Indian reservations. These are important in a state where the federal government owns 70 percent of the land.

“They sort of have a unique process in Utah,” Slone said. “They got a lot of different stakeholders to weigh in and produced a document that is guiding their decisions, and their goal to raise these additional funds and commit these dollars to transportation. It was a universal effort, and legislators and other folks really tout this as a founding document.”

Utah’s transportation program isn’t all about repairing what it has.

The state’s population is expected to nearly double by 2050, from 2.9 million to nearly 5 million people, a combination of large, growing Mormon families and an expected influx of new industry and accompanying residents from other states. So accommodating additional traffic from newcomers was important in planning and selling higher taxes in a state that relies on more than 43,000 miles of roads and 5,800 miles of state-maintained highways.

In addition, the Salt Lake City metro system—which is known as TRAX and transports about 68,100 riders daily—is slated for expansion.

Utah couldn’t count on the federal government to solve its transportation needs.

Between 2001 and 2012, federal funds made up 34.6 percent of Utah’s transportation budget—the lowest of any state, according to a study by Transportation for America, an interest group made up of political, business and civic leaders pushing transportation funding.

Congress also has left the federal gas tax, 18.4 cents per gallon, untouched for 21 years, passing stopgap highway funding measures in recent years with no comprehensive plan to keep federal highway funding apace with inflation. The Institute on Taxation and Economic Policy estimates the federal gas tax has lost nearly 40 percent of its value since the last time it was raised.

In a February report, “Funding Challenges in Highway and Transit,” The Pew Charitable Trusts (Pew funds Stateline) said that state gas tax revenue to fund transportation also has declined by 15 percent from 2002 to 2012.

A Model of Success

This isn’t the first time Utah has sought to tackle its transportation needs. According to the American Association of State Highway and Transportation Officials, Utah “by almost any measure” has one of the “most successful transportation organizations in the country,” winning praise for how it has helped people move around the state.

As far back as 1997, the state came up with a plan for future transportation funding that did not count on the federal government and its gas-tax-funded Highway Trust Fund. With its eyes on the 2002 Winter Olympics in Salt Lake City, Utah designated 42 highway projects that would not have been completed without more funding and increased the gas tax from 19 cents per gallon to 24.5 cents per gallon, putting the money into a special highway fund. Most of the projects were completed before the Olympic flame was lit.

In 2009, Utah issued $2.2 billion in bonds to pay for projects, including a $1.7 billion reconstruction and expansion of Interstate 15, the major north-south artery between Salt Lake City and the Provo-Orem area in Utah County, one of the fastest growing counties in the nation.

Utah also has led in construction innovation. Consider the Sam White Bridge demolition and reconstruction, which was part of the I-15 project and is considered a model for building bridges quickly so that traffic isn’t disrupted for days, weeks or months.

The old two-span bridge was torn down and a new bridge moved into place in less than 24 hours in 2011. The new bridge was constructed on a “bridge farm” on the east side of I-15. Then, hydraulic jacks on wheels, controlled by a joystick, were used to lift the 3.8 million pound bridge, move it across eight freeway lanes, and lower it into place. It was done overnight and the bridge was bolted down and ready for traffic by 7 a.m.

U.S. Sen. Orrin Hatch, a 38-year Senate veteran, said that the population in his state is growing rapidly and the state is constricted by federal land, giving rise to innovation.

“Utah is way ahead of most states,” the Republican senator said. “We have an electorate that believes we want to have a good state and have things that work.”