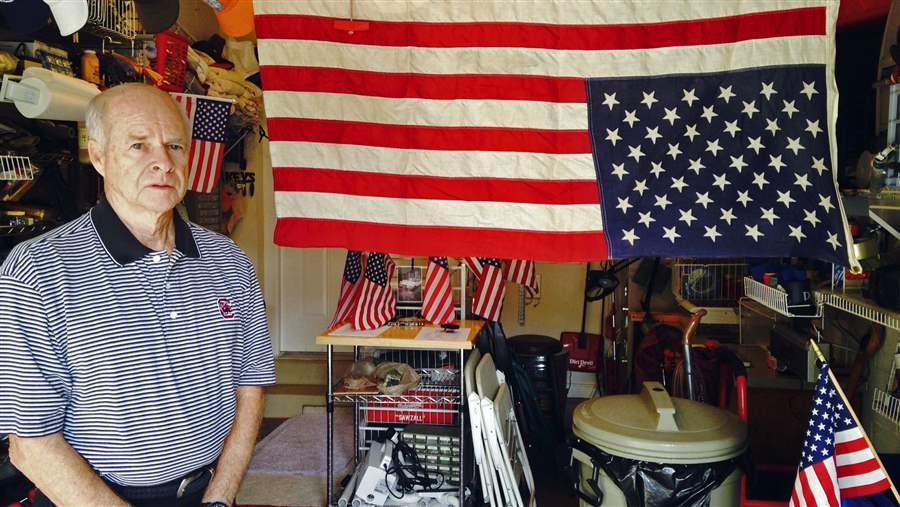 Larry Murphree of Jacksonville, Florida, hangs a U.S. flag upside down in his garage to protest his condo association's decision to fine him for sticking a tiny flag in a flower pot on his porch. Some states have created ombudsman offices to handle the deluge of complaints between residents and their associations.

Has your homeowner association fined you for painting your house purple? Have you ignored requests to pay annual maintenance fees for your condo’s clubhouse and swimming pool? Has your association refused to let you see its financial documents?

These are the types of conflicts that frequently erupt between residents and homeowner or condo associations. Some can get quite heated—or downright nasty.

A small, but growing number of states are trying to tackle the problem by creating ombudsman or homeowner information offices to handle the deluge of complaints that often land at state and local agencies. The goal is to educate residents and association board members about their rights and responsibilities under the law and help settle disputes before they wind up in court.

“You’re dealing with people and personalities and homes and emotions,” said Heather Morton, a legislative analyst for the National Conference of State Legislatures. “Having an ombudsman is a way to have somebody a little more neutral offer help and information to the homeowners and the board, and possibly mediate and bring the parties together so they can reach an amicable solution.”

Ombudsman bills were introduced this year in six states—Connecticut, Hawaii, Massachusetts, Minnesota, New Hampshire and New York—but none passed, according to the Community Associations Institute (CAI), a trade group for homeowner and condo associations and their managers.

More than 66 million Americans live in planned communities of single-family homes, or in condominiums or co-ops, according to CAI. The residents automatically become members of an association when they move in and must comply with the association’s covenants and bylaws.

Elected volunteer board members usually are responsible for association finances and enforcing the rules. The boards require dues to operate and maintain common areas, such as clubhouses and sidewalks and, in some places, services such as snow removal and garbage pickup. They can levy fines and place liens on properties when homeowners haven’t paid their fees. And they can regulate the exterior appearance of a home, and enforce rules that affect parking and pets.

Ombudsmen say they’re making a difference by preventing conflicts from escalating into legal battles. But CAI, the trade group, questions whether ombudsman offices are necessary.

Dawn Bauman, a senior vice president at CAI, said ombudsman programs often don’t provide relief for homeowners. She said many complaints, such as disputes over putting up a fence or adding a shed, are dismissed or resolved in the association’s favor because residents don’t understand the rules and responsibilities of living in a community association.

“It takes resources and time and money to fund a program like this, which could be unnecessary, if there was simple education in place,” Bauman said. “If homeowners would take the time to invest in understanding the process, most wouldn’t have to go through an ombudsman.”

Most ombudsman offices are funded by homeowner association fees; a few are supported by taxpayers.

That’s the case in Delaware, where the ombudsman is paid for out of the attorney general’s budget.

Delaware legislators created the office because they were seeing more homeowner complaints and the courts were becoming clogged with them, said Rep. Melanie George Smith, who sponsored the measure.

“There was no government organization or agency responsible,” said Smith, a Democrat. “People would call us and say, ‘Hey, there’s a Hatfield and McCoy dispute here. What are you going to do?’ My response, unfortunately, was you’ll have to hire a lawyer and go to court.”

In one bitter, decadelong legal battle, a Delaware judge ruled that the president of a homeowner association had deliberately refused to accept a couple’s annual assessment check year after year, maligning them and calling them “deadbeats” in letters to other residents.

Smith, a lawyer, said she used to grow frustrated when constituents would call her office and she would have to tell them that their only recourse was the legal system.

“They don’t have the time and money,” she said. “There had to be someone who could pick up the phone and talk to them, who could also mediate disputes between board members and homeowners.”

In Delaware, homeowners with a complaint must first go through an internal dispute resolution process within their association. If they’re not satisfied with the result, they can file a complaint with Curtin’s office. He can investigate and make recommendations, refer it to another agency such as the insurance department, or offer mediation or arbitration. He also can issue subpoenas if there are allegations of fraud, theft or other violations of state law.

Curtin says he gets calls or emails daily, and that homeowners often don’t comprehend the rules or why they’re required to pay an annual assessment. Some object to how a board spends their money or say it failed to follow the bylaws, such as having a quorum for annual meetings.

“People have strong feelings about how they are regulated in their own homes,” Curtin said. “They don’t realize they’ve already agreed that their house can’t be painted a certain color or they can’t put up a clothesline outside. Once they read the covenants, they realize the courts will uphold the rules and it’s usually a losing battle.”

Occasionally, it’s the board who complains to Curtin, such as when a homeowner has a disabled car parked on the street or is illegally operating a business out back without a permit.

Sometimes it’s not that simple.

This summer, for example, a homeowner association in Sussex County threatened a resident with a lien because his grass hadn’t been cut, although he had owned the property for only a week and hadn’t moved in, Curtin said. The same board had issued fines and pre-lien notices to residents for not properly covering their garbage cans, even though board members were also violating those rules. Curtin said it was a pattern of misinterpretation and misapplication of the bylaws. Several members ended up resigning.

Virginia has taken a different approach to its ombudsman's office, which is part of the state Department of Professional and Occupational Regulation and is funded by fees from homeowner associations and managers.

Ombudsman Heather Gillespie said unlike her Delaware counterpart, her office doesn’t handle complaints about association rules and regulations, which must be taken up by the courts.

Instead, Gillespie said she mostly deals with access and transparency issues. Board members often want to find out if they can meet in executive session or when they’re required to post a meeting notice, she said. Homeowners often complain that the board is meeting improperly in secret or prohibiting them from viewing financial records.

“I think education is what solves problems,” Gillespie said. “If people understand the law and how it applies to them and their association that may be all that’s needed.”

In Nevada, where the country’s oldest ombudsman office for homeowners is run out of the Real Estate Division, nearly 50 percent of state residents live in communities with homeowner associations, said division administrator Joseph Decker. The office has grown, since its creation in 1997, to a staff of 21 and a budget of about $4.5 million, which comes from association and manager fees.

Decker said the office handles 100 to 150 complaints a month, mostly from homeowners. They range from gripes about the grass not getting cut every week to disputes over fines to more egregious cases, such as board members colluding with contractors to embezzle funds. Those more serious cases can be taken before a state commission and referred to law enforcement agencies, Decker said.

“Our ombudsman program provides a low-cost way for the state to try to resolve those disputes instead of everyone having to sue each other,” he said.