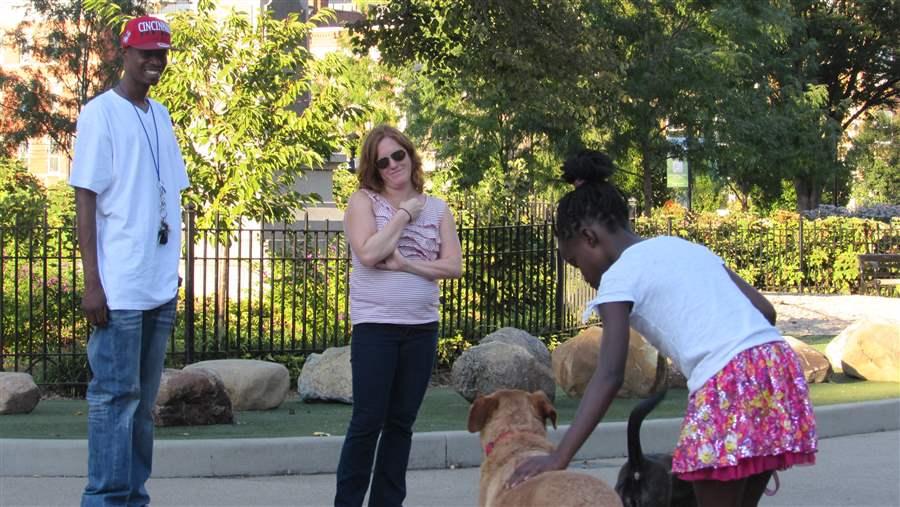 Stephen Ray, left, and daughter Alexis, foreground, in Cincinnati’s Washington Park, where renovations are widely credited with bringing people of diverse racial and economic backgrounds together.

This story has been updated to correct the name of the Cincinnati Center City Development Corporation, which has renovated 144 buildings in the city.

CINCINNATI — Ten years ago, the city of Cincinnati used some of its federal housing funds to help local business leaders buy up vacant buildings around a derelict park that was littered with needles and bullet casings.

Today, Washington Park is a gleaming 8 acres with underground parking and daily events like morning workouts and “Yappy Hour” cocktails for dog lovers. And it’s the centerpiece of a diverse neighborhood where affordable housing was expanded along with market-rate condos.

“In this park it’s pretty diverse,” said Stephen Ray, 35, a bottling plant worker out walking his dogs with his wife and three children. “If you go half a mile in any direction, it’s not like that. Every neighborhood has its own ethnic, racial makeup.”

This reformation could serve as a model for other cities to replicate when new federal rules intended to fight housing segregation take effect next year. Called Affirmatively Furthering Fair Housing, the rules require those who use federal housing funds to take “meaningful actions to overcome historic patterns of segregation.”

Cincinnati may offer a compelling example of what it takes to desegregate. It progressed enough toward desegregation from 2000-10 to fall off a list of “hypersegregated” cities. Princeton University sociologist Doug Massey, who released the list this year, uses five traditional measures of black-white segregation, and he considers areas that score highly on at least four of those measures to be hypersegregated.

Metro areas that have made the least progress—still with high marks in all five segregation measures—are Birmingham, Alabama; Baltimore, Chicago, Cleveland, Detroit; Flint, Michigan; Milwaukee; and the St. Louis metro area, which includes Ferguson, where the shooting of an unarmed black teenager by a white police officer last year sparked nationwide protests.

A Surprise in Louisville

The cities that have become more integrated have taken a variety of approaches.

Louisville attributes its success to several factors, including the decision to bus students from cities to suburbs and vice versa to create racial and economic diversity and remove a motive for white flight. Despite legal challenges, the public has shown support for integrated schools by defeating politicians who called instead for “neighborhood schools,” historian Tracy K’Meyer of the University of Louisville wrote in 2013.

K’Meyer acknowledged that may be surprising in an era when school desegregation and busing are seen by some as failed social experiments. “But it reflects a history of support for integration, and considerable community defense of busing as a means to achieve it,” K’Meyer wrote.

Atlanta said its biggest challenge in the last decade was affordable housing after foreclosure doubled the number of vacant homes, threatening to derail an ascendant black middle class and make poverty more concentrated. The city responded with programs that produced almost 7,000 affordable housing units between 2006 and 2013, including more than 4,000 built with local and state funds, according to a 2014 report.

The Cincinnati park and its neighborhood—known as Over-the-Rhine because it was once home to German immigrants and was separated from downtown Cincinnati by a canal—had suffered white flight for decades, losing 44 percent of its white residents in the decade before 2000, according to city estimates.

Mayor John Cranley, a Democrat, had pushed for a plan to renovate buildings in the area with a mix of public and private investment since he was a city councilman in the wake of riots that devastated the area around the park in 2001.

“Against the backdrop of all of our social and racial problems, most of those problems can be solved if we have renewed economic investment in the city,” Cranley said in 2003, the year the project plan was finalized.

The nonprofit public-private partnership, which is called Cincinnati Center City Development Corporation, or 3CDC, includes major corporations headquartered in Cincinnati: Procter & Gamble, Macy’s and General Electric. The 3CDC has bought 200 vacant buildings and 170 vacant lots. So far, it has renovated 144 buildings and built 50 new ones with 1,100 housing units, including 320 shelter beds to house the homeless who once slept in the park, said Anastasia Mileham, 3CDC vice president of communications.

A Rebound from White Flight

City estimates show that Over-the-Rhine reversed decades of white flight between 2000 and 2010, when some of the units were being completed. White population rebounded, its share of the total population going from 19 to 26 percent. And the change may be much greater today, Mileham said, because the bulk of the 1,100 new units built so far had not been occupied until after 2010.

The park and Over-the-Rhine are often cited as the most visible successes in bringing new economic and racial diversity to a downtrodden area. But other actions by the city and surrounding Hamilton County have also aimed to ease segregation.

Over the last 10 years, the city has worked to relocate low-income families with government-subsidized Section 8 housing vouchers from areas of concentrated poverty into areas with low poverty, with the goal of having more mixed-income neighborhoods like Over-the-Rhine.

And since 2001, the city and the county have worked through the Cincinnati Metropolitan Housing Authority to transform public housing projects in the poverty-stricken West End into the mixed-income City West development. The $73 million project has so far produced 700 units of subsidized and market-rate housing. The city and county have also recruited landlords to serve low-income subsidized-housing clients in the suburbs.

“In this way, the city has directly led to furthering desegregation by opening up affordable housing unit opportunities to a greater variety of families,” said Oscar Bedolla, the city’s director of trade and development.

“This has meant a substantial number of whites and blacks living on the same blocks in a number of Cincinnati neighborhoods and Hamilton County communities,” according to Charles Casey-Leininger, the University of Cincinnati historian who did the study.

Can other cities learn from Cincinnati’s success? Massey, who coined the term hypersegregation, doesn’t think so.

Other than zoning for affordable housing in the suburbs, segregation is less about policy and more about economic opportunity and “the degree of local racial prejudice,” Massey said.

In Cincinnati, some individual communities have made a difference by being passionate about integration, according to Casey-Leininger.

In the late 1960s and early 1970s, when highway construction destroyed housing in several mostly black, inner-city areas, some communities, like middle-class Kennedy Heights, made an early decision to welcome black neighbors. They signed agreements not to engage in panic selling and have remained integrated, he said.

The city’s progress is not without its strains.

The crowd that now hangs out in Washington Park is more integrated, said Brandon Craig, an attorney for Housing Opportunities Made Equal (HOME), a nonprofit that analyzes fair housing in the city and county. “But there was a high cost to that integration,” he said. “The issue is: ‘Where do those low-income families go?’ ”

Displaced families have been treated fairly by 3CDC, Craig said, but the city needs to investigate whether they are going to other integrated neighborhoods or poor, black neighborhoods where segregation could be heightened.

Craig’s office handles about 500 discrimination complaints per year, and it recently took landlords in Over-the-Rhine and other neighborhoods to court for treating black and Hispanic customers differently from white ones.

White and black residents say they still see strong signs of segregation, despite the visible progress in Washington Park.

People are sensitive to the problems that accompany gentrification, he said. “There’s a good effort to make sure there’s still good diversity remaining.”

Cam Means, 28, a black man who owns a clothing store in the neighborhood, said people his age are helping to improve things.

“Our generation is a little more come-together than the last generation, and you see that in the rallies and the events, people coming together, white, black, Hispanic, Asian, whatever. But there’s still some of that same segregated mindset from our parents and grandparents.”