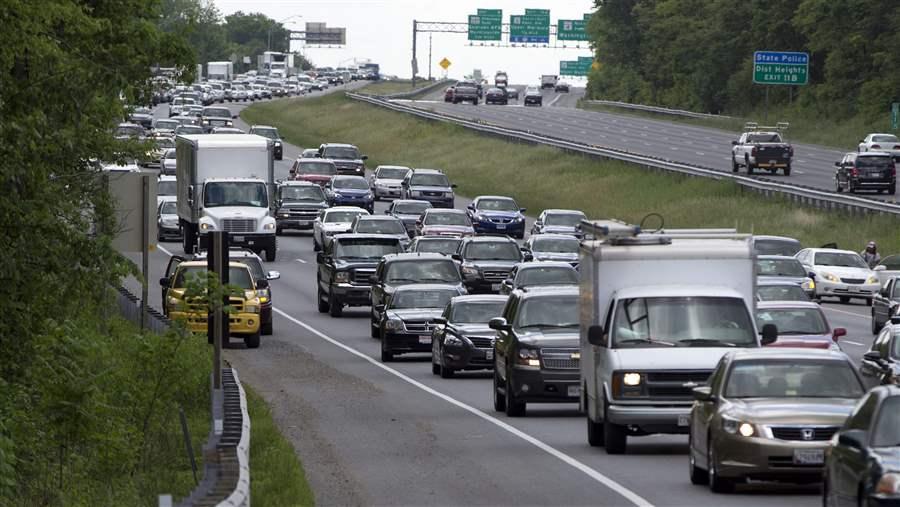 Vehicles are pulled off on the shoulder during bad traffic congestion, on Interstate 495 outside of Washington. Maryland and D.C. have issued regulations to prevent individual consumer data from being used to set insurance rates.

This story has been updated to include AAA's assertion that it does not utilize price optimization.

When Fred and Donna Wolden’s biannual car insurance premium went up by $90 last month, they wanted to know why.

The Wisconsin retirees hadn’t had an accident or bought a new vehicle. In fact, they say not much has changed in the two-plus decades they’ve insured their home and cars through AAA. The couple is used to premium increases of 5 to 8 percent, but this year’s 20 percent increase has them wondering if it is the result of “price optimization,” a rate-setting method rooted in consumer spending habits that is drawing the scrutiny of state insurance regulators around the country.

Ten states (California, Florida, Indiana, Maine, Maryland, Ohio, Pennsylvania, Rhode Island, Vermont and Washington) and the District of Columbia have warned insurance agencies not to use individual spending habits or a history of shopping around to predict how big a price increase a customer will tolerate.

The Woldens’ renewal notice shows that AAA used a consumer report to help determine their premium, but they say they haven’t been able to obtain a copy of the report.

AAA does use credit reports and other consumer reports to set rates, according to spokeswoman Adrienne Woodland. But Woodland said AAA does not consider that to be “price optimization” because it only weighs factors it can correlate to future expected losses or expenses.

Critics of the practice say that when insurers drill down to individual consumer data, such as purchase records from credit cards or supermarket club cards, they can end up charging different rates to customers who pose the same insurance risk. But the insurance industry says it analyzes consumer data to rate groups of customers, not individuals, and that the practice helps them offer fair and stable pricing.

In Rhode Island, the most recent state to warn against price optimization, the move was pre-emptive, said Paula Pallozzi, who works for the Rhode Island insurance division. There is no evidence that insurance companies are using the technique.

Douglas Heller, a consultant for the Consumer Federation of America (CFA), said he thinks that insurance companies are evaluating individual policyholders on factors unrelated to risk and that state regulators want to get in front of technology that provides access to consumer data.

“There’s a reasonable concern that if they let the horse out of the barn, that insurance companies will get so technologically out ahead that insurance regulators will really lose their ability to oversee the industry,” he said.

The restrictions on price optimization vary in each state, but regulators generally have limited insurance companies’ ability to use consumer information that is unrelated to a policyholder’s level of risk. The Rhode Island bulletin specifies that insurers must base rates, and the classes in which they lump customers, on factors related to expected losses and expenses.

The Woldens said a AAA representative couldn’t explain the premium hike when they called about it, but the insurer did knock $21 off their premium—after inquiring about the couple’s former occupations and education levels. The Woldens acknowledge their ages (they are both over 70) may have contributed to the rate change, but say their “insurance scores”—measures of their finances and credit—have not changed significantly.

After reading about price optimization—and other rate-setting practices—the Woldens speculated that the tactic could be linked to their rate increase. AAA said it does not publicly discuss the details of individual policies.

“We just think there’s something here that they’re using that we can’t put our finger on,” Fred Wolden said.

In doing so, insurance companies sometimes work with third-party vendors to develop a customer analysis based on a range of data, said Heller, the CFA consultant. That could include information, he said, about whether a customer has shopped around for insurance, where she regularly shops or what kind of products she buys.

“I suspect nobody is revealing [their rating factors] because it’s entirely inappropriate and it would creep people out,” Heller said.

But Robert Hartwig, an economist and the president of the Insurance Information Institute, a nonprofit backed by the insurance industry, said insurance companies use consumers’ data to analyze groups, not individuals. Hartwig said the abundance of consumer data helps insurance companies set accurate, competitive prices, which lead to a stable marketplace.

“As insurers collect more information, just like any industry, they are able to perform sophisticated analyses,” he said. “It creates a set of rates that’s more accurate than any time in history.”

Regulations on price optimization ultimately won’t affect how insurance companies do business, Hartwig said, because insurers don’t use data to evaluate individual customers, but instead evaluate the risk associated with groups of policyholders.

Judging market conditions before setting rates is a natural move for the insurance industry. And, as in other industries, insurance companies have to be able to set prices based on market data to stay competitive, Hartwig said.

“It is a competitive marketplace and it is quite reasonable for an insurer to try to determine what impact a new product might have on profit,” Hartwig said, noting that insurance markets lack the volatility of markets for airline tickets or food.

But Heller and other consumer advocates say factors used in price optimization are not indicative of risk, and such pricing hurts low-income drivers and homeowners, who may be less likely to shop around because they are not financially savvy.

“With price optimization, they argue that it gives them tools to judge the market better,” Heller said. “But this isn’t an equivalent of selling flowers or a plane ticket. It’s something the government mandates every driver purchase.”

The insurance market is more favorable to low-income purchasers than many other markets: it does not include penalties for switching to better or cheaper products. Furthermore, Hartwig said, the price of insurance policies does not go up and down based on the time of purchase the way airfare prices do.

He also rejects the idea that low-income customers might not shop around for better insurance rates. He points to an Insurance Institute survey that indicated 68 percent of respondents making less than $35,000 a year compared insurance prices at various agencies by phone, on the Internet or in person.