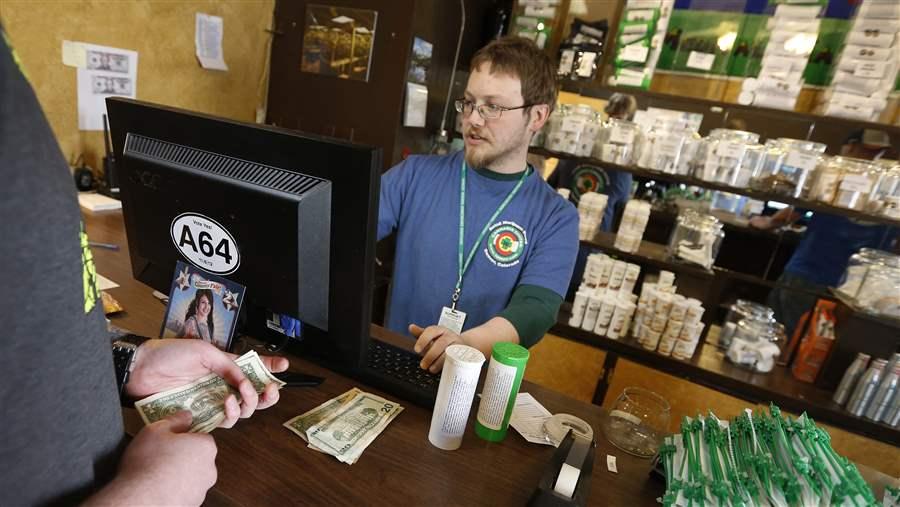 A customer pays cash for retail marijuana at the 3D Cannabis Center in Denver. Colorado and other states are frustrated they cannot bring banking to the cash-heavy legal marijuana business. (AP)

The nation’s rapidly expanding legal marijuana industry, which operates in 23 states and the District of Columbia, enters a new year facing a multibillion-dollar question: What to do with all the millions in cash it collects each week?

Nearly all of the nation’s banks refuse to take money from marijuana sales or offer basic checking or credit card services to the industry for fear they’ll be shut down by federal authorities, for whom marijuana remains an illegal narcotic. The banks won’t do business with growers, processors, retail shops and medical dispensaries, nor with their employees and contractors.

“It’s the biggest problem we have,” said Taylor West, deputy director of the National Cannabis Industry Association, many of whose 800 members are awash in $5, $10 and $20 bills and change and no bank to put them in.

The abundance of cash makes the country’s 2,000 retail shops and medical dispensaries tantalizing targets for criminals. Without bank accounts, legal marijuana businesses have a hard time paying their employees and vendors. Relying solely on cash leads to a lack of transparency in accounting and auditing, and it complicates paying the taxes that states impose on cannabis.

The problems caused by a cash-and-carry retail business likely will grow as more states move to legalize pot for medical or recreational use, unless Congress steps in and changes federal drug and drug-trafficking laws.

Voters in Alaska and Oregon approved legal marijuana sales for recreational use on Nov. 4, joining Colorado and Washington state, which opened retail recreational sales last year. Residents of the District of Columbia also voted to legalize possession and transfer of small amounts of marijuana, and city officials think they can get around a congressional effort to block the new law.

Pro-pot organizers are eyeing the 2016 ballots in Arizona, California, Massachusetts, Maine and Nevada for initiatives to legalize recreational use.

Meanwhile, medical marijuana use continues to expand. Although Florida voters fell just shy of approving medical marijuana in November, it is allowed it 23 states and D.C. Eleven other states, including Florida, have approved legislation for cannabis research and treatment of disorders that can cause seizures, according to the National Conference of State Legislatures (NCSL).

Because the legal marijuana industry is expanding so rapidly, it is difficult to get firm figures on how big it is. West estimates it at between a $2 billion and $3 billion annually, and she and others expect the legalization trend to continue, which means significantly more growth.

“I think this horse is out of the barn,” said Scott Jarvis, director of the Department of Financial Institutions for Washington state, where medical and recreational marijuana is legal.

What’s needed now, Jarvis said, is for banks and credit unions to be freed from the prospect that federal bank regulators will shut them down for doing business with legitimate marijuana enterprises.

If that happens, he said, retailers won’t have to worry so much about being robbed, and businesses won’t have to show up at the Washington State Department of Revenue with “boxes and suitcases” stuffed with bills to pay their taxes.

Under federal law, marijuana remains a federal Schedule I drug, in the same class as harder drugs such as heroin. That has been the case since 1970, when Congress passed the Controlled Substances Act, making it illegal to manufacture, possess or distribute it. The law also makes it illegal for financial institutions that depend on the Federal Reserve System’s money transfer system to take any proceeds from marijuana sales.

At an NCSL conference last month, Megan Michiels, senior counsel with the American Bankers Association, said most banks don’t want to put themselves in jeopardy by opening accounts or receiving any money—even indirectly—from the sale of marijuana for fear of violating drug laundering laws and being shut down.

“There’s just too many risks,” she said.

States had hoped new rules issued last year by the U.S. Department of the Treasury would reassure banks that they can do business with the industry. The rules required banks to report their state-licensed marijuana customers and ensure they are following state law and don’t violate Justice Department guidelines, such not selling to minors. In a separate memo, the Justice Department directed U.S. attorneys not to pursue banks as long as they adhere to guidelines.

That didn’t allay bankers’ fears, however. Nor has a provision of the broad spending bill passed by Congress last month, which said that the Justice Department cannot spend any money to prosecute medical marijuana patients or dispensaries if they’re acting in accordance with state laws.

A bill by Rep. Ed Perlmutter, a Colorado Democrat, would explicitly allow banks and credit unions to provide banking services to legal marijuana businesses. But it died in the last session of Congress.

Others say nothing short of Congress removing marijuana from the controlled substances list or providing states a safe haven from the Controlled Substances Act will remove bankers’ fears.

“Until federal law is changed, we just don’t see any way to go forward,” Michiels of the bankers association said.

Working Around the Problem

In the absence of congressional action, some states, along with businesses, banks and credit unions, are trying to solve the problem on their own.

Jennifer Calvery, director of the Treasury’s Financial Crimes Enforcement Network, said in August that only 105 banks and credit unions—a tiny fraction of the more than 100,000 in the U.S.—take money from legal marijuana businesses.

The Salal Credit Union in Washington state is one.  Bob Schweigert, Salal’s senior vice president and chief lending officer, said the credit union began a pilot program in the spring when the state began licensing producers and retail sellers to open accounts for them.

Working with the industry requires more due diligence to ensure the businesses meet state law and federal guidelines, which includes monitoring of the accounts for anomalies, he said. It also includes armored car pickups of the cash from retail outlets because, he said, “we don’t want large amounts of cashing coming into our branches; we don’t want to put our staff at risk.”

The program is working well and the credit union plans to expand its customers up to 25 in coming weeks and then venture into loans for them, Schweigert said. “It really comes down to knowing your customers,” he said. “Many of them are established business people.”

Hoping Nobody Gets Killed

Some businesses are working with closed payment systems, in which a third-party middleman handles banking and bookkeeping to relieve some of the burdens on the financial institutions.

In Colorado, Bruce Nassau has an arrangement similar to that for his “fairly decent size” marijuana business, which he estimates brought in “north of $10 million” last year.

Still, he worries about dealing with the bags of cash customers lay down for a quarter of an ounce to an ounce of pot in his five retail marijuana shops in Denver. Nassau’s biggest fear is that his employees will be robbed, injured or killed while working in the cash-only shops or depositing cash.

“You’re trying to deposit thousands and thousands of dollars at a time,” he said. “Any Tom, Dick or Harry can come up and hit you over the head.”

A security force of former military and police officers takes the cash off his hands because regular armored car services won’t do it. Then the security officers painstakingly deposit thousands of dollars at a time into ATMs of a bank Nassau won’t name. He doesn’t have a signature account at the bank or a credit card. He said he works through a third party, and the bank can end the arms-length relationship at a moment’s notice.

This way of doing business is strange for Nassau, 61, who sold a successful cable television company and entered the legal marijuana business more than two years ago. Without basic banking services, he said, “your start to feel like a criminal.”

“The irony is we’re trying to take an industry that has been underground and make it visibly transparent,” he said. “But the biggest thing is this is a major public safety concern.”

Colorado hopes its decision last November to issue a charter to The Fourth Corner Credit Union will help solve the problem for its pot retailers. The credit union is waiting for a master account from the Federal Reserve System that allows it to clear checks and transfer funds within the nation’s money system – something all financial institutions must have. It’s also waiting for federal deposit insurance from the National Credit Union Administration, which regulates credit unions.

As a state-chartered institution, the Fourth Corner Credit Union should automatically qualify for a master account, but getting insurance could take up to two years. Colorado can allow it to operate while it waits, however.

The state has said Fourth Corner is about the last thing it can do to try to solve the problem of too much cash on the streets and no banking services for Colorado’s marijuana industry. Ultimately, the problem is one Congress must solve.

“We’re hoping Congress will act,” said West of the National Cannabis Industry Association. “The worry is it’s going to take someone getting killed to get action on this.”