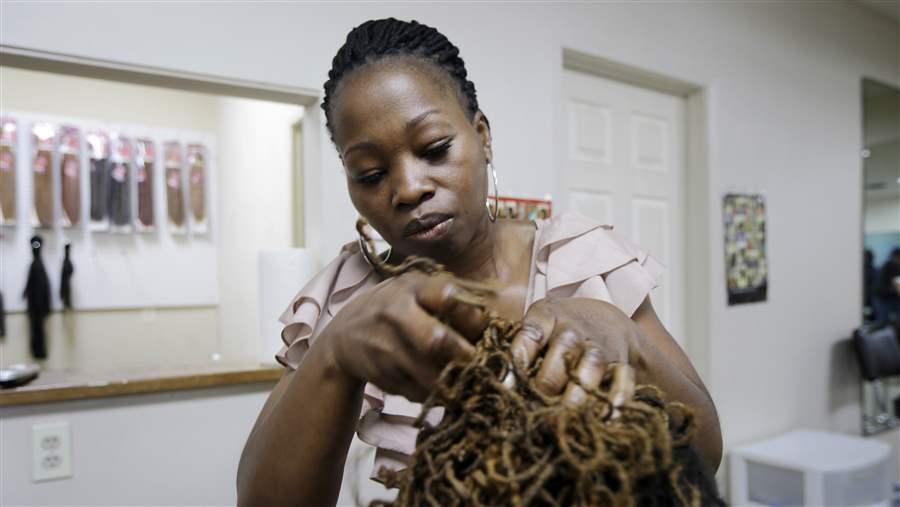 Christine McLean braids Nivea Earl’s hair in McLean's Little Rock, Arkansas, shop in June. The two African-style hair braiders are suing the state, challenging licensing laws that they say impede their constitutional rights. A number of states are under pressure to stop requiring licenses for some occupations. (AP)

Nivea Earl was thrilled when she opened Twistykinks hair braiding salon in Jacksonville, Arkansas, last April. Earl had been practicing the African-style art of twisting and braiding hair for at least 16 years, first working on friends, classmates and family and later taking on clients at home. Now, she had finally launched her own storefront business.

But Earl has done no advertising and has been running Twistykinks only through word of mouth. That’s because what she is doing is illegal under Arkansas law, where she needs a cosmetology license to braid hair. That would mean 1,500 hours of training, passing two exams and paying thousands of dollars to attend a cosmetology school that doesn’t even teach hair braiding.

“It’s totally discriminatory against hair braiders,” said Earl, 33. “I don’t think we should have to be held to the same standards and guidelines as cosmetologists and barbers. Hair braiding does not involve chemicals or cutting or dying the hair. We don’t even shampoo it.”

Earl and Christine McLean, a hair braider in Little Rock, are plaintiffs in a federal lawsuit against the state of Arkansas. They are among more than a dozen hair braiders who have sued in 12 states, with the help of the Institute for Justice, a libertarian public interest law firm, arguing that occupational licensing laws impede their constitutional right to earn a living.

The hair-braiding lawsuits are among many licensing battles that have erupted in numerous states.

States with occupational licensing laws require that people who want to work in a particular occupation or profession for compensation must meet certain standards. Often, the individual must pass a test, undergo a specific amount of education or training and pay a fee. The boards that oversee licensure generally are comprised of people from that industry.

Supporters of occupational licensing laws, which regulate everyone from doctors and dentists to door repair contractors and auctioneers, say that they are necessary to protect consumers and provide oversight.

But a growing chorus of critics argues that many state licensing requirements are burdensome and create barriers to competition and job growth. They say that those who have licenses have an incentive to keep others out of the market, because with less competition they are free to charge consumers more.

“By its nature, occupational licensing is designed to shrink the available pool of labor,” said Lee McGrath, the Institute for Justice’s legislative counsel. “It creates barriers to entry and makes it harder for people to enter the field of their calling.”

In the 1950s, only 5 percent of American workers were required to hold an occupational license. Today, that number is nearly 30 percent, according to Morris Kleiner, a professor at the University of Minnesota’s Humphrey School of Public Affairs who has done extensive research on the subject. As the requirements have grown, so have the earnings of those with licenses.

“Typically, the occupations will lobby the legislature in order to become licensed,” Kleiner said. “They will often go to a legislator or group of them and convince them of the importance of their occupation being licensed. They also help in campaign contributions to those legislators.”

A 2012 Institute for Justice study found that of 102 low- and moderate-income occupations examined, workers on average had to pay $209 in fees, take one exam and get about nine months of education and training.

The occupations ranged from emergency medical technicians and school bus drivers, who must be licensed in every state, to hair shampooers and interior designers, who need licenses in only a handful of states.

Among the states ranked as having the highest number of licensed occupations and the most burdensome requirements were Arizona, California, Oregon, Nevada and Arkansas.

McGrath said training requirements for the same occupation vary greatly from state to state. For example, in Iowa, cosmetologists must undergo 490 days of training; in Massachusetts, they need only 233 days, he said.

Jeanne Mejeur, a senior research analyst for the National Conference of State Legislatures (NCSL), said most states have separate licensing boards for each occupation. But while in some states applicants are required to take exams and meet stringent requirements, in others they only have to register.

Supporters, including trade and professional associations, say professional licensing protects public health and safety, weeds out bad apples and ensures the reliability of services. Myra Irizarry, director of government affairs at the Professional Beauty Association, which represents cosmetologists, who are licensed in every state, said that her industry is “greatly concerned” about the threat of deregulation.

“We agree there’s room to streamline the process to obtain a license and reduce the amount of regulation,” Irizarry said. “We are working in our own industry to encourage consistency across states and license reciprocity. However, we strongly stand by the occupational licensing of the cosmetology industry.”

Irizarry said that because states require licensure, consumers who have complaints can have their voices heard and seek action against a cosmetologist who has harmed them. She said her group doesn’t believe hair braiders need cosmetology licenses, but that they should be registered and take a health, safety and sanitation course. Irizarry said cosmetologists have a physical, hands-on relationship with clients and use chemicals that can cause burns or hair damage. Nail salon customers can suffer toenail fungal infections.

“For you, as a consumer, these are people who are going to come near your skin, your face, your hair, your scalp,” Irizarry said. “You’re going to school to learn how not to cut someone’s ear off, not to burn their scalp or have their hair fall out.”

In some states, governors or legislatures have attempted to deregulate some occupations or halt efforts to license new ones. But trade associations and their members and schools that offer the required training typically lobby hard against such efforts.

In Indiana, Republican Gov. Mike Pence tried unsuccessfully to get a measure passed in 2013 that would have eliminated licensing requirements for more than a dozen occupations, including cosmetologists and real estate brokers. The bill died from a lack of support in the General Assembly, but Pence did end up vetoing two bills that year that would have licensed diabetes educators, anesthesiologist assistants and dietitians.

And in Michigan, the legislature last year voted to deregulate eight occupations, ranging from nutritionists to community planners, who prepare government land use plans.

“When you’re looking at high unemployment, you need all hands on deck,” said Republican state Rep. Tim Kelly, who sponsored one of the bills. “You don’t need some silly regulation keeping someone from earning a living.”

Kelly said that he believes that medical professionals such as doctors and dentists should be licensed by the state. But he doubts that some other types of occupations need that kind of regulation.

“The state shouldn’t be in the business of protecting their monopoly,” he said. “If it doesn’t affect public health or safety, then why is the state involved at all?

In Texas, new Republican Gov. Greg Abbott has made occupational licensing one of his targets.

He has proposed repealing a number of licenses, including those for dog trainers, interior designers and cosmetologists. He’d like to abolish criminal penalties for people who don’t comply with licensing requirements, except when public health and safety is at risk.

Abbott also wants to adopt a policy that would step up reciprocity allowing people licensed in other states to practice in Texas with few or no additional regulatory requirements.

Texas already has been a battleground in the occupational licensing war.

Earlier this month, a federal judge ruled against the state in a hair-braiding case. He found that it was unconstitutional for Texas to require Isis Brantley, who ran a Dallas school that taught hair-braiding, to get a license as a fully equipped barber college to legally operate her business. Under the state’s rules, Brantley would have had to install at least five sinks, even though hair-braiders don’t wash hair.

The Texas Supreme Court is also expected to rule soon on a dispute over whether eyebrow threaders must be licensed as cosmetologists.

Courts in other states also have gotten involved in licensing disputes in recent years.

In 2011, a federal judge in Louisiana ruled that the state could not require casket sellers to be licensed as funeral directors, who were required to do an apprenticeship and pass a test. In Arizona, animal massage practitioners are suing over the state’s requirement that they get a veterinary license.

And last fall, the U.S. Supreme Court heard a case in which the Federal Trade Commission sued North Carolina’s dental examiners board for antitrust violations. The FTC said the board could not bar people who are not dentists from offering teeth-whitening services at a lower price.

The one group that all sides agree shouldn’t have to jump through lots of licensing hoops are veterans.

All 50 states have enacted laws that make it easier for veterans to obtain, transfer or renew an occupational license when returning to civilian life, according to Jennifer Schultz, a policy associate at NCSL. Forty-five states have passed similar laws to help veterans’ spouses.

While the strongest pushback against occupational licensing has come from libertarian or free-market groups, some liberals also believe the process needs to be changed.

Matthew Yglesias, a former fellow at the liberal Center for American Progress and Alan Krueger, a Princeton University economist and former chairman of the White House Council of Economic Advisors under the Obama administration, have both been critical of occupational licensing requirements.

They say that it’s an issue of wage inequality because it reduces employment opportunities for lower-skilled people and creates higher prices often borne by low-income consumers.

“Conservatives might view this as an issue of competition and free markets. For those on the left, it may be more concerns about inequality or impacts on consumers, especially low-income ones. Maybe it’s an area where people can come to agreement,” said Jason Wiens, policy director for the Ewing Marion Kauffman Foundation, a nonpartisan organization that focuses on education and entrepreneurship.

Wiens’ organization recommends that states replace some licensing requirements with a less onerous form of regulation, such as registration or a state certificate of competency, when public health isn’t seriously threatened. “Those who don’t have a certificate could still practice,” Wiens said. “They would offer the service at different prices. And then let the consumer decide.”

Many occupational licensing critics argue that certification, a voluntary process in which a person gets the authority to use a designated title from a private or trade association or the state government, is preferable to licensing.

But some experts warn that states should be careful about swapping certification for licensure, especially if it’s being done by private groups.

“The question is who’s doing the certifying and who’s benefiting from the certification?” said Kim Weeden, a professor at Cornell University who directs the Institute for the Social Sciences. “There’s a whole industry out there whose business is selling certifications to different occupations. Give us $500 to take this online test. You’ll get a different type of fox guarding the henhouse.”