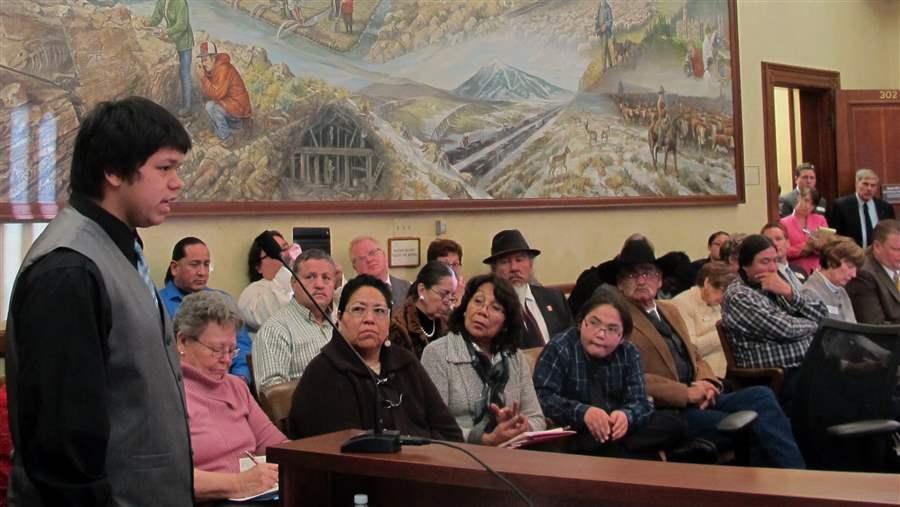 Whitecloud Sun Rhodes, of the Wind River Indian Reservation, speaks in favor of expanding Medicaid at a meeting of the Wyoming Senate Labor, Health and Social Services Committee in Cheyenne. Other Western states are also mulling whether to expand the federal-state health care program to low-income adults under the Affordable Care Act. (AP)

The federal government yesterday approved Indiana’s plan to expand Medicaid under the Affordable Care Act, increasing the number of expansion states to 28, plus the District of Columbia. With enrollment starting Feb. 1, Indiana’s plan could add an estimated 350,000 low-income adults to the nearly 5 million expected to enroll in the 27 states that expanded Medicaid last year.

In accepting Indiana’s plan, the Obama administration demonstrated its determination to increase the number of expansion states, even if it means waiving traditional Medicaid rules. For example, under Indiana’s plan, people with incomes above the federal poverty level ($11,670 for an individual) must contribute to a health savings account or be locked out of coverage for six months.

The penalty for not paying into a health savings account, which has never before been approved by the U.S. Department of Health and Human Services, reflects an important GOP health care tenet: People who receive Medicaid benefits should take personal responsibility for their care. Republican Gov. Mike Pence called his plan “the first-ever consumer-driven health care plan for a low-income population.”

Judith Solomon, health policy director at the Center on Budget and Policy Priorities, which advocates for low-income people, noted that Indiana’s plan is derived from a successful demonstration project that has been in effect since 2007, so its green light doesn’t necessarily apply to other states. 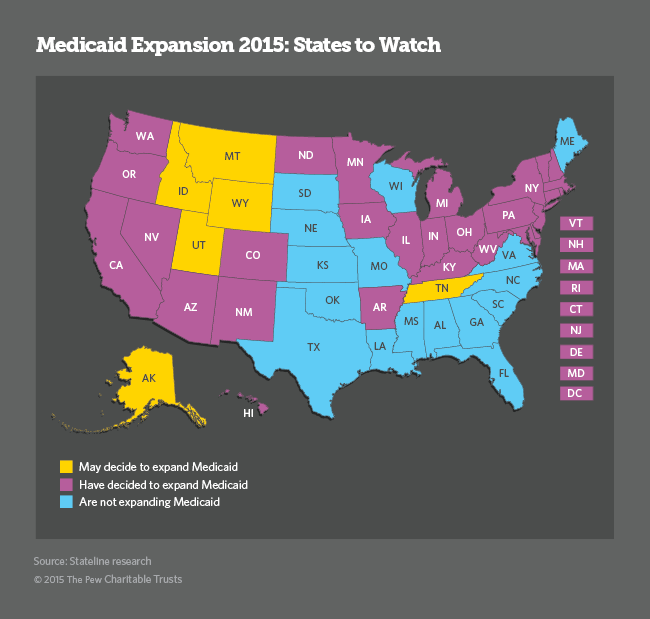 Under the Medicaid expansion that is part of the Affordable Care Act (ACA), the federal government pays the full price for covering newly eligible adults with incomes up to 138 percent of the federal poverty level ($16,105) through 2016 and then gradually lowers its share to 90 percent in 2020 and beyond.

Since the Supreme Court’s 2012 decision making Medicaid expansion a state option, the issue has become more political than practical. Despite the offer of billions in federal dollars, Republican governors and lawmakers in many states have rejected the deal, fearing they could lose their jobs if they were seen cooperating with the Obama administration on a law most conservatives disagree with. Some states also worry that even the 10 percent share may be too much for them to afford, or that the federal government will scale back its contribution sometime in the future.

Since the Nov. 4 elections, those fears seem to have subsided, said Joan Alker, director of the Georgetown University Center for Children and Families, which advocates for Medicaid expansion.

In the weeks after the election, governors in Alaska, Idaho, Montana, Tennessee, Utah and Wyoming asked lawmakers to approve detailed proposals for expanding the federal-state health plan for low-income adults, in some cases restarting previous efforts to seek approval for expansion.

In a smaller group of states in the South – Alabama, North Carolina and Texas – governors said for the first time they were open to the idea of expanding Medicaid. Other than Arkansas, no Southern state has expanded Medicaid.

Following is a rundown of Medicaid expansion proposals in the states most likely to move forward this year:

Alaska: Newly elected governor Bill Walker, the nation’s only Independent governor, wants to cover some 20,000 Alaskans through traditional Medicaid starting July 1. If state lawmakers agree with the governor’s plan, Alaska could be the next state to start enrolling newly eligible adults this year.

According to a study by The Urban Institute, Walker’s expansion plan would cut the state’s uninsured rate by more than half. Another study, commissioned by the state health agency, predicts that between July of this year and 2020, expansion would save Alaska $29 million as the federal government picks up some health care costs the state is bearing now.

Republican lawmakers, who hold a majority in both chambers of the legislature, have agreed to hear evidence from the Walker administration on the benefits of expansion for the state’s budget and economy. But most oppose the plan on principle, and a multi-billion dollar budget gap and crashing oil prices vie for their attention.

Idaho: In his Jan. 12 State of the State address, Republican Gov. Butch Otter asked lawmakers to consider evidence in favor of expanding Medicaid to 103,000 low-income Idahoans through a customized expansion plan.  Under a proposal presented in a paper by a working group Otter appointed in 2012, residents with incomes below the federal poverty level would be assigned to a managed care plan within the existing Medicaid program. Residents with incomes between 100 percent and 138 percent of the federal poverty level could sign up for a private insurance plan on the exchange, much like Arkansas residents.

If lawmakers pass Otter’s plan, which he says has the tacit approval of the federal government, the state could save $173 million over the next 10 years as more costs are covered under the higher federal match rate. Otter’s plan would require participants to cover copayments for non-emergency use of hospital emergency rooms and pay the maximum premiums allowed under existing Medicaid rules.

Montana: Democratic Gov. Steve Bullock asked lawmakers this month to approve legislation, the Healthy Montana Plan, which would expand traditional Medicaid coverage to about 70,000 Montanans. Republican lawmakers, who control both houses of the legislature, have proposed an alternative plan that would use state money instead of accepting money from the Obama administration and would limit coverage to about 15,000 low-income parents and veterans.

In 2013, a Medicaid expansion bill nearly passed the Montana Legislature. But a Democratic lawmaker who intended to vote for it accidentally pressed the wrong button. His vote could not be changed because a state law says legislative voting errors cannot be corrected if they would affect the outcome of the vote. The legislature did not meet the following year. This year, the legislature is in session and the balance of power is about the same as it was in 2013.

Tennessee: In December, Republican Gov. Bill Haslam announced he was close to an agreement with the federal government on an alternative expansion plan called Insure Tennessee. Under the proposal, the state would provide vouchers to help low-income residents pay premiums for employer-sponsored insurance. Low-income residents without an employer-offered plan would receive coverage through a plan resembling a health reimbursement account, with premiums and copayments for people with incomes above the federal poverty line.

Insure Tennessee, which would cover more than 300,000 residents, has been under consideration by the federal government for nearly two years.

Utah: Early last year, Republican Gov. Gary Herbert announced details of a plan to expand Medicaid to about 95,000 low-income adults using private insurance, similar to Arkansas’ plan. It would require low-income Utahans to show that they are making an effort to find employment in order to qualify for coverage. This month, he renewed his push to seek legislative approval for his proposal.

Wyoming: Republican Gov. Matt Mead has been discussing an alternative Medicaid expansion idea with the federal government since last summer. In November, he released details of Wyoming’s “Strategy for Health, Access, Responsibility and Employment,” or the SHARE plan, that would cover an estimated 17,000 residents. All participants would make copayments, and those with incomes above the federal poverty level would pay monthly premiums of $25 to $50. All participants would have access to employment assistance programs like job search services and vocational rehabilitation, but their Medicaid eligibility would not be affected.

Alabama and North Carolina also are deep-red states, but Republican governors Robert Bentley of Alabama and Pat McCrory of North Carolina both have made comments recently suggesting they are open to the idea of expanding Medicaid.

Earlier this month, McCrory announced he has had preliminary discussions with the Obama administration about customizing the state’s approach to expansion. In December, Bentley told state lawmakers he would be open to a Medicaid expansion along the lines of Arkansas’ “private option,” under which newly eligible Medicaid beneficiaries purchase private health plans on the insurance exchange. Neither governor has made public a detailed proposal.

In both Florida and Texas, billion-dollar federal Medicaid funds to compensate hospitals for unreimbursed care are set to expire soon – Florida’s in June and Texas’ in September 2016. Those impending deadlines and other provisions of the ACA are draining hospital revenue in both states. As a result, hospitals are pressuring both governors and Republican lawmakers to allow them to tap into the health law’s intended countervailing benefits for hospitals by insuring more residents through a Medicaid expansion.

Republican Gov. Rick Scott of Florida announced his support for expanding Medicaid in 2013, but has not expended any political capital to make it happen. In Texas, former Republican Gov. Rick Perry was among the nation’s fiercest critics of the ACA. But his Republican successor, Greg Abbott, told a group of lawmakers in a private meeting last month that he wanted to know more about Utah’s alternative model for expansion, according to the Houston Chronicle.