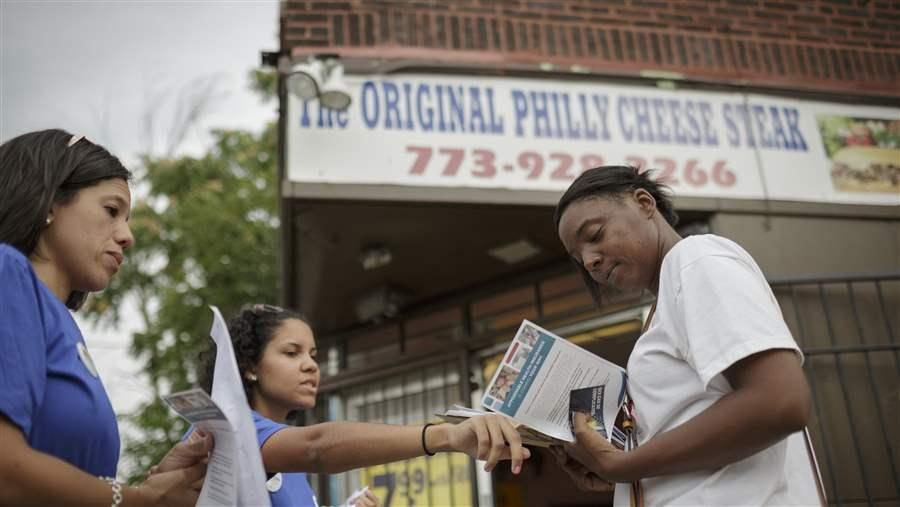 Get Covered America volunteers Cynae Derose (L) and Jalisa Hinkle talk with Shirese Davis about the Affordable Care Act (ACA) while canvassing a Chicago neighborhood. A disproportionate number of low-income African-Americans are caught in a “coverage gap”: They make too much to qualify for Medicaid, but not enough to qualify for subsidized insurance on the ACA exchanges. (AP)

Thanks to the Affordable Care Act, the percentage of people of color who do not have health insurance is projected to fall dramatically by 2016, greatly narrowing the historic disparities in coverage between whites and nonwhites.

But one minority group is likely to benefit less than others: African-Americans.

Fifty-five percent of all African-Americans reside in the 23 states that have not expanded Medicaid eligibility under the ACA. By comparison, 42 percent of whites, 38 percent of Latinos and 23 percent of Asians live in nonexpansion states, according to the Urban Institute.

In those nonexpansion states, a disproportionate number of blacks don't qualify for the narrower Medicaid program in place now. Medicaid typically covers pregnant women, young children, and disabled and elderly adults. Relatively few able-bodied adults with children qualify in those states, and only at incomes well below the federal poverty level. (Childless adults do not qualify.)

Even if they meet the other eligibility requirements, many African-Americans in nonexpansion states earn too much to qualify for Medicaid, but not enough to qualify for subsidized insurance on the federal health care exchanges (which exist in all states), leaving them caught in a “coverage gap.”

Before a June 2012 Supreme Court ruling made Medicaid expansion optional, the ACA anticipated that all states would expand the program. Since the assumption was that people below the federal poverty level ($11,670 for an individual) would be covered by Medicaid, only people making between that amount and four times that amount qualify for federal aid to buy insurance on the exchanges.

More than a quarter—1.4 million—of the 4 million Americans in the coverage gap are black. According to Jessica Stephens, a senior policy analyst with the Kaiser Family Foundation, a large number of Latinos also are caught in the coverage gap. But because they live largely in states that have expanded Medicaid, they are not represented in such disproportionate numbers.

“If the other states that have so far refused Medicaid expansion expanded it, the black/white (disparity) would drop dramatically,” said Lisa Clemans-Cope, a health economist at the Urban Institute and the author of a new report on coverage rates under the ACA. “Where you live matters.”

Some Republican-dominated states have refused to expand Medicaid to express their opposition to the broader health care law, but others cite fiscal concerns. The federal government will pick up 100 percent of the costs of expansion through next year. But starting in 2017, the federal share will gradually decline until it reaches 90 percent in 2020, where it will remain. Some states worry that the 10 percent share may be too much for them to afford, or that the federal government will scale back its contribution sometime in the future.

A disproportionate percentage of blacks live in the South, and that is where resistance to expansion remains strongest.  Roughly half the states that have not expanded Medicaid are located in that region.

Southern states also have the strictest eligibility requirements for their current Medicaid programs. In Mississippi, for example, the parent/caretaker in a family of three would be ineligible for Medicaid if he or she earned more than $384 a month. About 86 percent of people in the coverage gap reside in the South, according to Stephens from the Kaiser Family Foundation.

Living in the Gap

Expanding Medicaid would be a big help for African-Americans in the coverage gap, according to Katherine Howitt, senior policy analyst at Community Catalyst, a national nonprofit group that advocates for affordable health care. Without insurance, Howitt said, poor working people don't have many options beyond relying on emergency rooms or the few community health care centers that offer free or discounted health services.

The majority of people caught in the coverage gap are employed. They're the working poor, paying the bills with a part-time gig or punching the clock with an employer who doesn't offer insurance. They may be juggling multiple jobs to make ends meet, or they may be in school full time.

“Closing the coverage gap can really give them a chance to get ahead,” Howitt said. “Right now, the coverage gap is politicized, tied in many legislators' minds to the ACA or Obamacare. There are lots of challenges in overcoming those political hurdles.”

“Securing health coverage is part of the larger conversation about securing and stabilizing our community,” said Derrick Harkins, national director for Faith Initiatives and African-American Engagement for Enroll America. “You're talking about economic stability, social stability, family stability; all those things are connected. (Health care) doesn't stand apart from those.”

A Litany of Disparities

African-Americans face a litany of health disparities. According to the U.S. Department of Health and Human Services, blacks are more likely to die from cancer than any other racial or ethnic group, are diagnosed with AIDS at nine times the rate of whites and are much more likely to rely on the emergency room for their health care than are whites. They are also 40 percent more likely to have high blood pressure and twice as likely to be diagnosed with diabetes. Black women are 40 percent more likely to die from breast cancer. The mortality rate among African-American infants is more than twice that of non-Hispanic white infants.

Research shows that people with insurance tend to be healthier than those without, so the relatively high percentage of African-Americans without coverage contributes to those gaps.

The impact of Medicaid expansion is evident in several metropolitan areas that encompass multiple states.

Similarly, in the Washington, D.C., metropolitan area, which includes parts of Maryland and Virginia, both the District and Maryland have expanded Medicaid, while Virginia has not. (Gov. Terry McAuliffe, a Democrat, has pushed for expansion, but the legislature has balked.) According to the Urban Institute, in 2016 the uninsured rate for blacks is projected to fall to 3.9 percent in the District, 6.4 percent in the Maryland suburbs, and 10.4 percent in the Virginia suburbs. If Virginia expanded Medicaid, the uninsured rate among African-Americans living in the Virginia suburbs of the District would drop to 6.2 percent.

“This is a chance to help the working poor and the backbone of the economy in these states,” Howitt said.