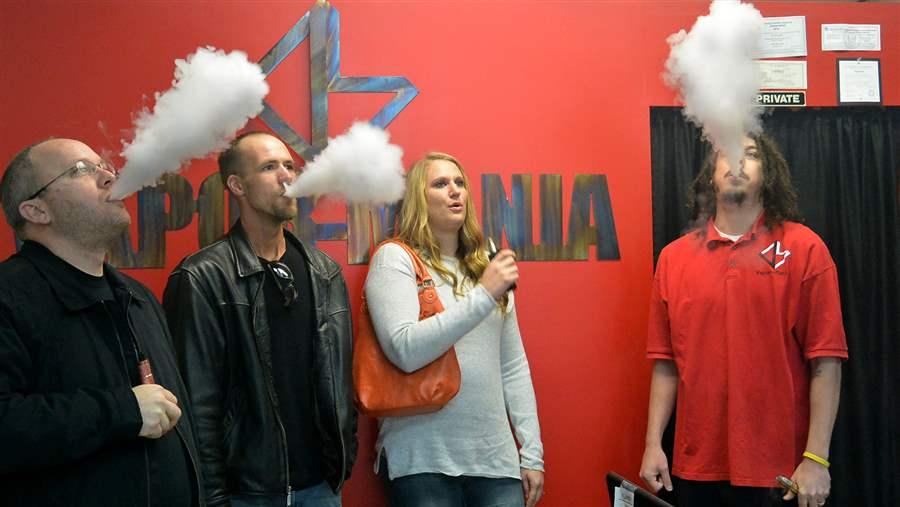 SUNSET, Utah— Taking a long inhale and blowing a cloud of vapor, Jason Jones, who has owned the Vapor Mania store here since 2011, considered what a tax would do to his business, which includes selling electronic cigarettes as well as manufacturing a wide variety of flavored nicotine liquids to go into them.

“I think we’d be out of business, or at least it would make it much harder to do business,” said Jones, 34. “I think it would drive people back to cigarettes because they would be cheaper.”

With an eye on the twin concerns of public health and raising revenue, Utah is one of many states considering taxing electronic cigarettes, the battery-powered devices that deliver vaporized nicotine and provide the look and feel of smoking without the smoke and tar of traditional tobacco products. Gov. Gary Herbert, a Republican, sparked this year’s debate when he included a footnote in his budget counting on $10 million from taxing e-cigarettes.

“I feel strongly that we should tax electronic cigarettes similar to the way we tax other tobacco products,” said Herbert, calling it a “public health issue.” Herbert and supportive lawmakers say a tax would slow the growing use of electronic cigarettes while raising revenue for the state.

“There are some who think these new products are not harmful, but just like traditional cigarettes, they contain nicotine and other toxic and addictive substances,” Herbert said. “Flavoring and marketing targeted to make these products enticing to youth is particularly concerning.” Without being specific, Herbert called for a tax on e-cigarettes “similar” to the taxes on cigarettes, cigars and snuff.

But e-cigarette users say the devices should not be subject to the excise taxes levied on traditional cigarettes. They argue that the devices are healthier, and liken them to nicotine patches and nicotine gum, which help smokers reduce their dependence on cigarettes and are not subject to excise taxes.

Jones, a former mixed martial arts fighter, said he gave up traditional cigarettes and turned to “vaping” because “sports and cigarettes don’t mix.” As for the candy flavors, Jones argues that “adults like candy, too,” citing “gummy bear” adult vitamins and designer chocolates.

With the popularity of e-cigarettes growing, more states are more likely to look to the new devices for revenue. Last Friday, Republican Michigan Gov. Rick Snyder vetoed a package of bills designed to regulate and tax e-cigarettes, saying it wasn’t tough enough. His veto sets the stage for further debate in the legislature this year.

“This is going to be one of the most introduced and debated topics in state legislatures this year, especially the tax issue,” said Max Behlke, analyst for the National Conference of State Legislatures. Behlke noted with fewer people smoking traditional cigarettes, a revenue stream that states depend on is decreasing. Taxing electronic cigarettes is a way to recoup some of that money.

Utah state Rep. Paul Ray, a Republican, proposed a bill last year to tax e-cigarettes that would have amounted to about an 86 percent tax on the product, about the equivalent of the amount Utah taxes cigars. The state’s cigarette tax is $1.70 a pack. He argues that young people who have never smoked are taking up the electronic version and his tax is aimed at preventing them from starting. “I’m not doing it for the revenue,” he said, “I’m doing it to keep it away from kids.”

Utah state Sen. Curt Bramble, Republican, who is incoming president of the National Conference of State Legislatures and whose committee would consider any bill to tax e-cigarettes, said the debate will revolve around whether e-cigarettes are an entryway to traditional tobacco products or a tool to help people stop using them. “While it’s true from the data that e-cigarettes are a great way to break the habit of smoking, there are those who also claim that e-cigarettes are enticing people to take up the habit because of the flavors and because it’s the ‘in’ thing to do,” he said. Bramble said extending taxation of tobacco taxes to e-cigarette products would be appropriate.

E-cigarette products come in two styles. One is a cigarette-like tube, which is generally sold for about $10 in convenience stores, and has self-contained batteries, chargers and liquid tanks. The other is a specialty device with a larger battery, around the size of a traditional cigarette pack. That version allows a user to change liquid flavors, and is generally sold in specialty vapor shops. A starter kit goes for about $25-$35.

All of the devices require bottles of liquid nicotine which vary in strength and size (though there are some versions without nicotine). The cigarette-like tubes already contain the liquid. The bottles cost about $4 for 10 milliliters, enough for hundreds of puffs. The flavors vary from chocolate mint and coffee to lemon and lime and cotton candy. Some of the smaller devices are sold in packs, resembling cigarette packs, and are products of tobacco companies, such as the R.J. Reynolds “VUSE” brand. A user inhales the device’s vapor, just like inhaling smoke from cigarettes.

The use of e-cigarettes by young people also shows an uptick. In its latest report on youth and cigarette smoking, the Utah Department of Health young people were more likely to report the use of electronic cigarettes than regular cigarettes. Some 3.9 percent of teens and pre-teens that Utah surveyed last year reported smoking cigarettes, while 5.8 percent reported using e-cigarettes.

The University of Michigan’s “Monitoring the Future” study, which tracks children and youth, showed in December 2014 that among teens, the use of e-cigarettes had surpassed the use of regular cigarettes.

The U.S. Food and Drug Administration is in the process of writing regulations for electronic cigarettes. In the meantime, a handful of states have prohibited their sale to minors and have passed laws banning their use in public buildings. In Utah, the signs say “no smoking or e-cigarettes” on the patio at the Buffalo Wild Wings in Midvale, packed to overflowing for the NFL playoffs. The debate has gone national as well, with the American Vaping Association, based in New Jersey, on the side of the e-cigarettes and the Tobacco Free Kids organization opposed.

In Indiana, lawmakers and the attorney general are backing legislation that would regulate and tax e-cigarettes. The tax would be assessed “similarly to traditional tobacco products” according to Attorney General Greg Zoeller, who did not provide more specifics. The bill also would require “vape shops” to be licensed by the Indiana Alcohol & Tobacco Commission and require that e-cigarette liquids be sold in child-resistant packaging.

Indiana state Reps. Ed Clere, a Republican, and Charlie Brown, a Democrat, are cosponsoring the legislation in the House.

“These stores are popping up everywhere,” Brown said. “I think we should tax them like cigarettes.” Brown said that Republican-controlled Indiana is generally a “no tax” state, but that framing the bill as a public health measure, particularly one that will help the young, is likely to win Republican votes. In addition, there’s the revenue factor. “We are losing revenue,” he said. “We are not meeting our revenue, and this would be an ideal source of revenue.”

In some states, lawmakers are making the distinction between imposing new taxes and simply extending an existing tax, such as on the tax on cigarettes, to e-cigarettes.

In Washington state, Democratic Gov. Jay Inslee has proposed raising the $3-a-pack cigarette tax by 50-cents a pack as well as levying a tax—he didn’t say how much—on e-cigarettes and vapor products. He said the taxes would raise $56 million.

North Carolina, a tobacco producing state, imposed a 5-cent per milliliter tax on the liquid nicotine last year. The relatively modest tax was supported by the R.J. Reynolds tobacco company. Bryan Hatchell, a company spokesman, called the North Carolina approach a “light touch tax” that takes into account the difference between cigarettes and liquid nicotine. The state’s cigarette tax is 45 cents per pack.

But Reynolds was less pleased with the approach taken by Minnesota, which last year instituted a tax that essentially is equal to the $2.90 a pack rate of ordinary cigarettes. “This has had the effect of pricing vapor products far higher than cigarettes and discouraging traditional smokers from switching to a smoke-free alternative,” Hatchell said.

Vapor backers tend to agree. Aaron Frazier, executive director of the Utah Smoke-Free Association, swears by the devices as a smoking-cessation tool and is trying to make his case to the Utah lawmakers this year.

Frazier’s group requires members to abide by a list of rules, including taking firm steps to enforce not selling to minors (19 years old in Utah, but 18 in most other states), and pledging not to sell liquid marijuana. The THC liquids (the active ingredient in marijuana) for e-cigarettes are outlawed in all but Colorado and Washington, but opponents of e-cigarettes argue the devices can be used to ingest marijuana products as well.

Brian Fisher, 31, a truck driver from Spanish Fork, Utah, and a member of the smoke-free group, says the devices saved his life. Diagnosed with lymphoma five years ago, “I tried everything to get off cigarettes, and couldn’t do it,” he said. “I found out about vaporizers and they saved me, basically. I want to share this with everyone I know.”