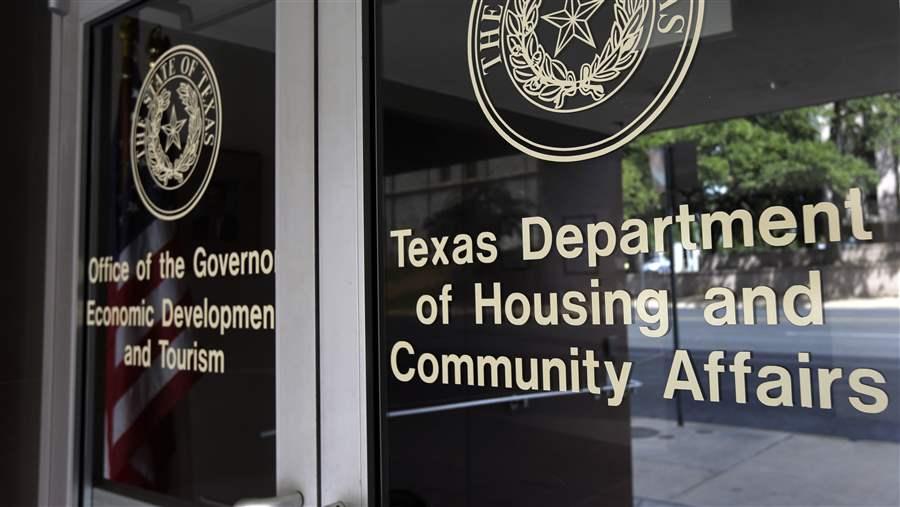 The Texas Department of Housing and Community Affairs in Austin, Texas. The U.S. Supreme Court today will hear arguments in a case involving the state housing agency that could have implications for states and cities nationwide. (AP)

Many cities and states fear the U.S. Supreme Court is about to strike down a provision of the 46-year-old Fair Housing Act they have frequently wielded as a weapon against racial discrimination.

For decades, cities, states and fair housing advocates have used the law’s “disparate impact” rule to challenge zoning rules, lending practices and other housing-related policies. Under the rule, plaintiffs don’t have to prove that a particular policy or practice is intended to produce a discriminatory result; they only have to prove that it does.

Texas Department of Housing and Community Affairs v. Inclusive Communities Project, which the high court considered today, is a challenge to the disparate impact provision. The case revolves around the awarding of federal tax credits to low-income housing developers in Dallas.

The facts are not in dispute: For many decades, the Texas Department of Housing and Community Affairs (TDHCA) almost always gave the credits to private developers who planned to build affordable apartments in low-income, African-American neighborhoods. The result was that low-income people, many of them black, were segregated in distressed, high-crime areas.

In March 2012, a federal district judge ruled that TDHCA’s policies resulted in a disparate racial impact, thereby violating the Fair Housing Act. The judge directed the agency to alter its policy, which it has. In recent years, the TDHCA has awarded credits to developers to build affordable housing all over Dallas.

But former Texas Gov. Rick Perry and former Attorney General (and now Gov.) Greg Abbott, both Republicans, appealed the judge’s decision in an effort to have the Supreme Court invalidate the disparate impact provision. The court is expected to rule on the case by the end of its term in June.

Texas officials, backed by a host of private interests, say disparate impact opens the door to lawsuits based on flimsy claims. The American Bankers Association filed a brief supporting Texas, as did the U.S. Chamber of Commerce, the Financial Services Roundtable and many others. They argue that the Fair Housing Act was meant to root out intentional discrimination, not adjudicate hazy allegations based on a given policy’s outcome—one that might be beyond officials’ control anyway.

“Equally troubling is the all-too-common agency practice of defining disparate impact liability in terms that are vague and indeterminate,” Texas argues in its brief. “It nevertheless gives agency administrators carte blanche to decide whether an asserted interest is ‘substantial’ enough to justify a racially disproportionate impact.”

Myron Orfield, a professor at the University of Minnesota Law School who previewed the case for the website SCOTUSblog, said the case is “as important as the affirmative action cases and the school integration case.” The Civil Rights Act and other laws also allow disparate impact challenges, but the case before the court today deals only with the Fair Housing Act and wouldn’t affect other laws.

“People are realizing more and more that these civil rights laws protect not only nonwhite people, but they protect everybody,” Orfield said, pointing out that the Fair Housing Act prohibits a wide range of potentially discriminatory policies, from so-called “blockbusting” (encouraging white property owners in a particular neighborhood to sell their houses at a loss by suggesting that racial minorities are moving in) to charging different rates to different people based on religion, background or disability.

For more than a half century, cities, states and the federal government have been combatting housing segregation and discrimination. In the last two decades, segregation has declined in many major metro areas around the U.S., according to an analysis from the Population Studies Center at the University of Michigan.

More than two dozen cities and states have stepped in to defend the disparate impact rule.

“Without disparate impact claims, States and others will be left with fewer critical tools to combat the kinds of systemic discrimination that the (Fair Housing Act) was intended to address,” said the brief filed by 17 states, including Massachusetts, New York, Arizona, North Carolina and Utah. “The result is of significant concern to States.”

They continued: “The effects of racial segregation and concentrated poverty are far-reaching and long-lasting, and the costs to state and local governments are significant. Without a comprehensive set of tools to combat these problems, the inequities will persist and, in some circumstances, worsen.”

Nearly two dozen cities voiced similar concerns in a separate brief. The Obama administration also is backing the disparate impact rule, as are a group of current and former members of Congress who argue that the disparate impact rule was always intended to be a part of the Fair Housing Act and should be upheld as a crucial discrimination-fighting tool.

The case could turn on either a technical reading of the Fair Housing Act, or more broadly on the justices’ willingness to give leeway to officials seeking to root out discrimination. Advocates are most worried about the justices taking a broad approach, given the court’s recent rulings chipping away at affirmative action policies and the Voting Rights Act.

Though he concedes he may be politically naive, Orfield said he isn’t worried. He pointed out that the disparate impact doctrine has been around for decades, and has its roots in the Nixon administration. He questioned whether a moderate like Justice Anthony Kennedy — the crucial swing vote on the court — would move to strike it down.

During Wednesday’s arguments, conservative Justice Antonin Scalia and liberal justices Ruth Bader Ginsberg and Stephen Breyer all focused on the wording of the Fair Housing Act and how the disparate impact rule has been used over time.

“There’s been disparate impact for 40 years,” Breyer said. “Why should this court come in suddenly and reverse an important law based on a fine-spun argument?”

Later, Texas got more support from Chief Justice John Roberts and Justice Samuel Alito, while Justice Anthony Kennedy, the typical swing vote on the court, said little. Roberts in particular seemed troubled by how ambiguous disparate impact allegations can be.