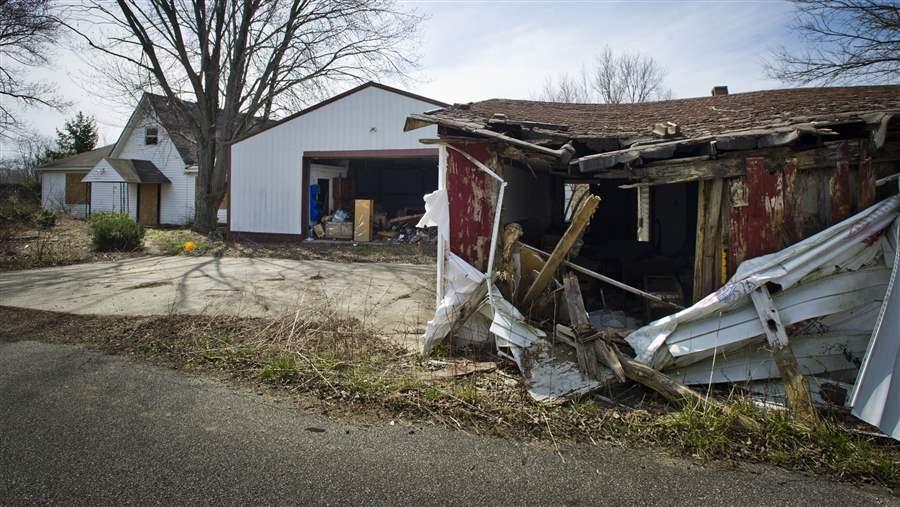 A meth lab once operated in this boarded and dilapidated home in Elizabethtown, Indiana. State police there have launched a website that maps meth lab seizure locations. A growing number of police agencies are using online mapping to alert citizens about criminal activity in their neighborhoods. (AP)

For more than two decades, law enforcement agencies have used data to figure out crime patterns and target “hot spots” in communities.

Now a growing number of police departments are going further by making some of that information available to the public online. They see it as a way to inform residents about criminal activity in their neighborhood and, in turn, help reduce crime.

Many people across the country, whether they live in small towns or major cities, can now pull up free crime-mapping websites, click on a geographic area and pinpoint where and when crimes ranging from burglaries to auto thefts have been reported.

“The best way to be safe is to be aware,” said Ben Gorban, project coordinator for the International Association of Chiefs of Police. “This helps the community. You can find out that there have been five car thefts in your neighborhood in the last week. So maybe you should lock your car and lock down your valuables.”

Gorban said that more than 1,000 police departments are offering online crime-mapping to the public. He thinks those numbers will continue to rise because of calls for more openness and because so many free or low-cost mapping programs have become available.

“There’s been clamoring for law enforcement to be more transparent, and this is one way for them to do that,” he said. “It started with posting online where sex offenders live, but that was kind of the tip of the iceberg. Now, they’re putting a lot more information online.”

As early as the 1930s, police were using push-pin maps to try to identify crime patterns, said Dennis Kenney, a professor at John Jay College of Criminal Justice at City University of New York. By the 1990s, many agencies had turned to computerized data analysis and mapping.

In the last five years, a number of agencies have begun sharing some of that data with the public. Many contract with analytical software companies that run crime-mapping websites such as CrimeReports and RAIDS Online. Most of the companies offer the online crime-mapping for public use free to police, or include it at no additional charge if the agency buys a more high-powered analytical software package designed for law enforcement.

The companies regularly extract data from police records. Names and exact addresses are removed and the information is entered into online maps that are updated frequently. The websites display crimes reported to police, such as assaults and robberies, over a period ranging from six months to a year. Depending on the police agency, information can sometimes be posted within 24 hours.

Users are able to look up crime information on a map and grid, based on geographic areas within a specific time range and filter it by type of crime and date.

Leah Haran, marketing analyst for BAIR Analytics, which runs RAIDS Online, said her company has signed up police agencies in 46 states, from tiny departments with fewer than 10 officers to big city ones such as those in Dallas and San Francisco.

Users who click onto the site can find a partial address, type of crime (RAIDS lists 22), the police agency that responded, date and time. The site also has a density map which shows hot spots. Users can view the information on an app and sign up for customized crime alerts.

“It helps the public get a better idea of crime in their area so they can make informed decisions about to how to stay safe,” she said. “If you see there have been numerous car thefts or people breaking into cars, you’ll think twice about leaving your iPod sitting on your seat. Or if you see numerous ATM thefts, you’ll think twice about using that one and maybe go to another one 10 minutes away.”

“It’s a way of getting information out to the public about what’s going on,” he said.

But Allen said that his department also uses the data from the free site internally to “police smarter.”

“Our resources are small and we want to make sure we have officers when they’re needed,” he said. “If I see a rash of burglaries on River Road at certain times, I know that if we started floating cars in that area, or maybe do traffic details, that’s one way to eliminate crime.”

They use RAIDS Online to show the public the locations of actual cases that prompt police reports. But they also use My Neighborhood Update, a website that maps all 911 calls for service, regardless of whether an officer fills out a report. That can include complaints about noise or trespassing.

Molly Miles, the department’s crime analysis supervisor, said the 911 calls website, which is updated every five minutes, is used heavily by neighborhood watch captains, who can find out what’s happening nearby almost in real time.

Miles said that website averages about 46,000 hits a month in her community. The RAIDS site, which went live in March, has gotten more than 5,600 hits.

“People are really interested in their safety and security,” she said. “Knowing where police officers are being requested to go makes a difference about how safe people feel in their environment. It’s natural to be really curious when you see police officers on your street.”

Miles said that since crime mapping was made available to the public, calls from people requesting information about what neighborhoods are safe to live in have “dramatically” dropped off.

John Jay College’s Kenney said that while giving the public access to crime-mapping information is a positive trend, it shouldn’t stop there.

“The next logical step is for the police to work with the communities on how they can use that information, what they can do about it,” Kenney said.

One way would be for police to develop neighborhood programs aimed at what’s called “crime prevention through environmental design,” he said. The concept focuses on understanding where and when crime occurs, so future victims can take preventive action.

Some changes are simple, such as covering up Christmas packages in your car to prevent them from being stolen. Others are more lasting, such as substituting thorny bushes for hedges where muggers can hide and prey on victims.

“If police work with citizens to develop these types of tools, it would be one marvelous way to use crime mapping data in the future,” Kenney said.

While most online crime-related mapping is launched by local police departments or county sheriff’s agencies, Indiana went a step further.

Last year, the Indiana legislature passed a bill requiring that the state police maintain an online database in which the public could look up methamphetamine lab seizure locations.

The Indiana State Police had been collecting that information internally for several years, and were already in the process of creating a meth lab mapping website.

The agency’s online map, launched in June, has had 75,000 hits so far, according to Niki Crawford, commander of the state police’s meth suppression section.

“Meth labs are very dangerous. They contaminate homes. They injure people, and can cause serious health effects,” she said. “They blow up or they create poisonous gases. Children raised there and people who cook the meth are exposing themselves to chemicals that we protect ourselves from as officers, when we have to process a crime scene.”

Crawford said that meth chemicals can be absorbed into a house or apartment’s walls or carpet or any porous surface. They also can remain in the heating or air conditioning system.

She said that in the past, her agency, which handles 97 percent of the meth lab cases in the state, used to get calls three or four times a week from real estate agents or potential homeowners, asking about whether a meth lab had been at a particular location. Her office would have to go through several different databases to get an answer—a labor intensive effort.

“Now, rather than people calling the office and us searching the database and downloading the forms, we can point them to the meth lab map,” she said. “It’s all at their fingertips.”

The map shows more than 9,000 locations across Indiana where a meth lab was busted since 2007. One click will bring up the address, seizure date, case number and a link to a report that lists the items found, type of lab, chemicals used and whether children were present.

The site also uses Google Maps to show photos of what the meth house looks like.

Meth labs highlighted on the map are only those that have not been cleaned up within 180 days of the seizure. Labs that are decontaminated after their location has been posted must be removed from the site within 90 days, under the state law.

Crawford said that the map is an important public service, given that Indiana led the nation in meth lab seizures in 2013, with 1,808.

Indiana state Rep. Wendy McNamara, a Republican, said she authored the meth lab disclosure bill because she was concerned about transparency and public health.

McNamara recalls meeting a real estate appraiser when she was campaigning who told her he had unknowingly worked at a home where meth had been manufactured. As a result, the residue had contaminated his lungs, and he started wearing a breathing apparatus when he appraised properties.

“It disturbed me,” McNamara said. “There needed to be disclosure and the public needed to know about it.”

McNamara came up with the measure as a way to help prevent people from unwittingly becoming victims. “A home that has had meth can be deadly and people can develop a sickness and they’re not sure why,” she said. “It can devastate folks.”

The legislation that passed also required that the seller of a property where a meth lab was located make that information known to prospective buyers in the realtor’s disclosure form, as is done with radon.

“It’s for peace of mind,” McNamara said. “For me, it’s about trying to protect the health of Hoosiers.”