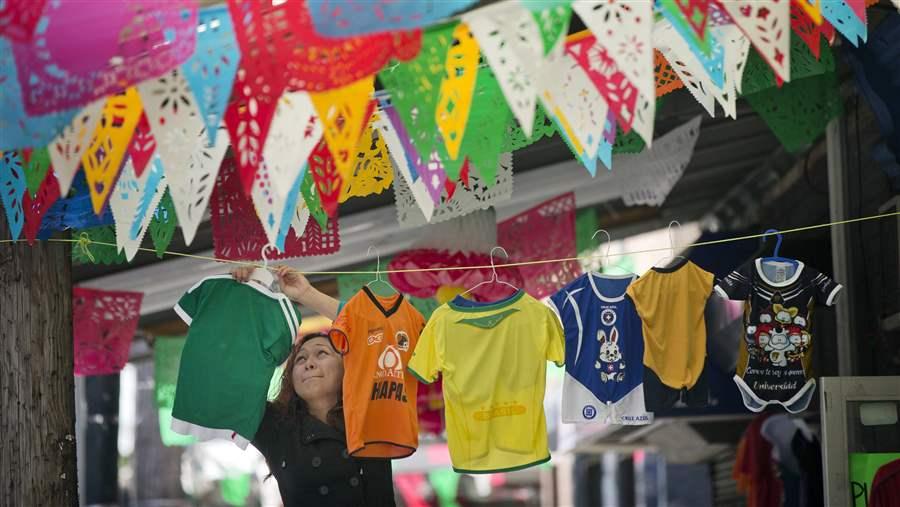 A vendor hangs articles of clothing along 9th Street in the Italian Market neighborhood of Philadelphia. The market was featured in a new report that said states and cities have a stake in supporting immigrant-owned businesses because of their role in revitalizing neglected neighborhoods. (AP)

States and cities have a stake in encouraging and supporting the growing number of immigrant-owned businesses because of their role in revitalizing neglected neighborhoods, according to a report released this week by the Fiscal Policy Institute and the Council for the Americas, a business organization that supports free trade.

Success stories include the 9th Street Italian Market in Philadelphia, where Latinos have revived a district once declining as Irish and Italian shopkeepers retired, and the Midtown Global Market in St. Paul, where an abandoned Sears distribution center became a multicultural market.

“Immigrants are not magic ingredients to an economic development strategy, but they are an asset to the cities they join,” concluded the report called “Bringing Vitality to Main Street – How Immigrant Small Businesses Help Local Economies Grow.”

Immigrants are especially prevalent in small retail stores and services such as grocery stores, restaurants, car washes and beauty salons that the report calls “Main Street.”  The number of immigrant Main Street business owners grew by 90,000 since 2000 while the number of American-born owners shrank by 30,000.

The report includes case studies from Nashville, Philadelphia and Minneapolis-St. Paul, where different strategies were assessed. All four cities, despite generally lower than average immigration, have been able to avoid population declines because of immigration, and all have a strong level of government support for immigrants.

Immigrant-owned small stores are now a majority in Los Angeles, San Jose, the District of Columbia and Miami. Nationwide, immigrants own most gas stations, dry cleaners and grocery stores, the study found.

Some of the report’s recommendations for states and cities interested in promoting this growth include: