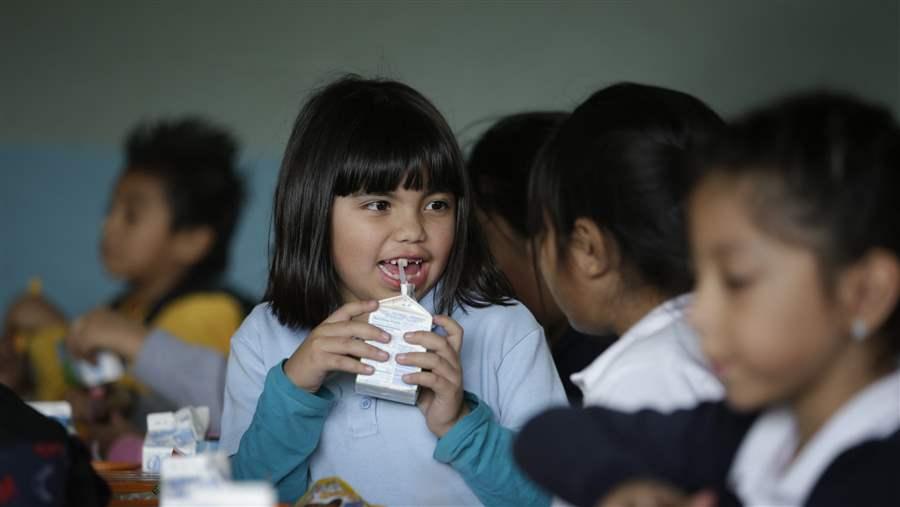 Hazel Loarca, 7, drinks her milk in the cafeteria area at a Los Angeles elementary school earlier this month. When the older population is predominantly white and the school-age population is not, Americans are more likely to vote “no” on local tax referendums to finance public school education.

Nearly 80 percent of seniors in the U.S. are white—while nearly half of people younger than 18 are black, Latino, Asian, Middle Eastern or multiracial.

What happens to state policy when the “racial generation gap” is so large?

Whatever their race or ethnicity, young people and older people often have different interests in the political arena.  Young people (and their parents) care about schools and job training, while older people tend to care more about property taxes and roads.  Voting patterns show that 70 percent of young adults are in favor of more government programs, compared to only 40 percent of seniors. Older people are more likely to vote and to vote Republican, while younger people turn out in smaller numbers and are more likely to vote Democratic —one reason why there has been such a fight over some states’ efforts to institute stricter registration rules.

A racial mismatch between the older population and the younger population can exacerbate those generational tensions, as can income differences between wealthier whites and poorer people of color.

As states continue to recover from the budget shortfalls of the past few years, this racial generational divide is likely to influence policy making on a wide range of issues.

Since the late 1990s, researchers have found that when faced with a young population that looks markedly different from their own, Americans are more likely to vote “no” on local tax referendums to finance public school education and are more likely to support spending cuts. This is particularly true when the older population is predominantly white and the school-age population is not, according to a 2012 working paper by the National Bureau of Economic Research.

“When you think about how it is impermissible to talk about touching Social Security or Medicare, but it’s okay to talk about shredding spending for education, that’s generational warfare,” said  Manuel Pastor, a sociology professor and director of the Program for Environmental and Regional Equity (PERE) at the University of Southern California.  Pastor added that states with the largest gaps also spend less on mass transit and are more likely to pass restrictive immigration laws.

“We need to bring people together across geographies and generations, create bridges across race and place,” Pastor said.

Some cities and states are trying to find ways to do so.

In Washington state, King County officials are now required by law to apply “fair and just” principles in all their planning and development activities. (It’s not clear how they measure these principles in day-to-day governing.) Last fall, California Democratic Gov. Jerry Brown signed into law a student loan program for undocumented youth attending state universities. The state also allocated $3.2 million for legal services for the unaccompanied minors flooding the borders from Central America.

Last year, Connecticut Gov. Dannel P. Malloy, a Democrat, signed a law establishing the Commission on Health Equity to address health disparities among different racial and ethnic populations in the state. This month, Minnesota legislators announced plans to introduce bills that would provide free preschool and free two-year tuition to community or technical colleges. And starting this fall, Tennessee students can apply for the Tennessee Promise scholarship, which guarantees two years of tuition-free education at a community college or technical school in the state. (President Barack Obama recently announced a similar, nationwide plan.)

Demographers and economists say such policies can go a long way toward ensuring that today’s children of color will be equipped to enter tomorrow’s job market. Ignoring the racial generation gap, they warn, would be bad for the economy and for society as a whole–particularly since those future workers’ salaries will be helping fund Social Security and Medicare.

Between 1790, when the first U.S. Census was conducted, and 1980, non-Hispanic whites accounted for anywhere between 80 percent and 90 percent of the total population, according to William Frey, a demographer and senior fellow at the Brookings Institution. That number has been falling  ever since, thanks to declining fertility rates among whites and an uptick in births among U.S. born “new minorities”—namely  Asians and Latinos, according to Frey, the author of “Diversity Explosion: How New Racial Demographics are Remaking America.” (A decline in white immigration also contributed to the drop.) Today, whites account for about 63 percent of the nation’s population. In California and New Mexico, whites are already in the minority.

Other states are projected to follow suit. In the 2010 Census, 46 states showed declines in their white populations. Texas, for example, saw its child population increase by one million between 2000 and 2010, the vast majority of whom were Latinos, according to Frey.

The racial generation gap is largest in Sun Belt states: Arizona, Nevada, New Mexico and California are the top four states, according to data compiled by Stateline. (Texas, often a hotspot for cultural clashes over issues like Latino studies in the schools, is number five.) That’s because in those states, whites tend to “age in place” while immigrant groups who once migrated to large metropolitan areas like New York and Chicago have dispersed around the country and into the suburbs, Frey said. (Vermont and West Virginia have the two smallest racial age gaps.)

Without focused attention on an economic growth that provides for both blue-collar and middle-class jobs, the disparity between the races could become even more pronounced, according to demographers.

As a worst case scenario, this could mean that the older, white population will be wealthy and living in isolated pockets segregated from the younger, browner populations, creating a kind of “neo-feudalism” where the elite class of minority whites enjoys a very good quality of life while the younger, non-white majority struggles.

For disadvantaged minority youth to succeed, states need to invest in early childhood education; extend public school education beyond the 12th grade and ensure that young people coming out of juvenile and adult detention return to jobs and schools rather than the streets, according to Angela Glover Blackwell, founder and CEO of PolicyLink, an Oakland-based research and advocacy group. If inequities between whites and non-whites don’t improve, the number of people living in poverty will increase from 45 million in 2013 to 68 million in 2050, according to the Population Reference Bureau.

“I think the future can be very bright,” Glover Blackwell said. “But it will only be bright if the American people—and politicians—understand that you cannot deal with poverty and opportunity as a side game. It has to be central to every investment, (all the) spending that the nation does. We have to make achieving equity the number one priority of the nation.”

The age gap is particularly pronounced between whites and Latinos, the largest and fastest growing minority group in the country. No state illustrates this more vividly than Arizona.

The median age for non-Hispanic whites in Arizona is 45; for Latinos, who comprise 30 percent of the state’s population, the median age is 25. (The median age for African Americans is 30.)  The state has passed some of the country’s most restrictive immigration laws. It also spends the least per child on education. (Vermont, which has the second-lowest racial age gap, spends the most per student, and has the lowest student-teacher ratio, according to the National Education Association.) When it comes to the number of children enrolled in preschool, Arizona is ranked 49th in the country. Twenty-six percent of the state’s children live in poverty.

Is it racial bias, or a matter of economics and self-interest? Research has shown that in general, people are more willing to support public services when the recipients are of the same race, according to David Figlio, director of the Institute for Policy Research at Northwestern University. Support for public services is lower when there is a greater diversity in the racial composition of the community. But researchers say that it’s not clear whether this can always be attributed to racial animosity.

“When you see people of your own group in an unfortunate situation, you say, ‘There but for the grace of God go I’,” said Joel Kotkin, a senior fellow at Chapman University and the author of “The New Class Conflict.” “If you see other people in an unfortunate situation, it’s easier to blame the personal choices of people in the other group, ‘They didn’t work hard, etc.’”

California, which has the fourth-largest racial age gap, once followed a similar path as Arizona. In the 1950s, the state built the country’s best education system, invested in physical infrastructure and set up programs that helped families become homeowners. This came at a time when white families were flocking to the state from the Midwest.

Starting around 1980, the state’s racial makeup started shifting as Latino immigration increased dramatically. But as the state’s white population aged, public policy priorities shifted. There was a rebellion against property taxes, school spending plummeted and there was considerable friction in the state around of immigration and affirmative action, according to the USC’s Manuel Pastor.

Today, 62 percent of Californians over 65 are white, while 73 percent of those under 18 are of color. But the racial age gap is shrinking somewhat in the state—largely because the state’s minorities are aging as well, and immigration has declined. Perhaps not coincidentally, California voters  voted to increase taxes in order to channel $3 billion to school funding. Meanwhile, Gov. Brown instituted a Select Committee on Boys and Men of Color to craft state policy.

“We exported a lot of bad laws, from ‘three strikes’ to the criminalization of youth,” Pastor said. “But we’re experiencing a turnaround, so maybe there’s a possibility of us exporting good practices as well. We don’t want the rest of the country to go through the bumpy ride of alienation and disconnection that we went through.”

Related Assets
State of the States 2015 Shifting Landscapes (Interactive)
About Stateline
Stateline’s team of veteran journalists provides daily reporting and analysis on trends in state policy.
Learn More
Media Contact
Jeremy Ratner
Director, Communications
202.540.6507
Sign Up
Sign up for our daily update—original reporting on state policy, plus the day's five top reads from around the Web.