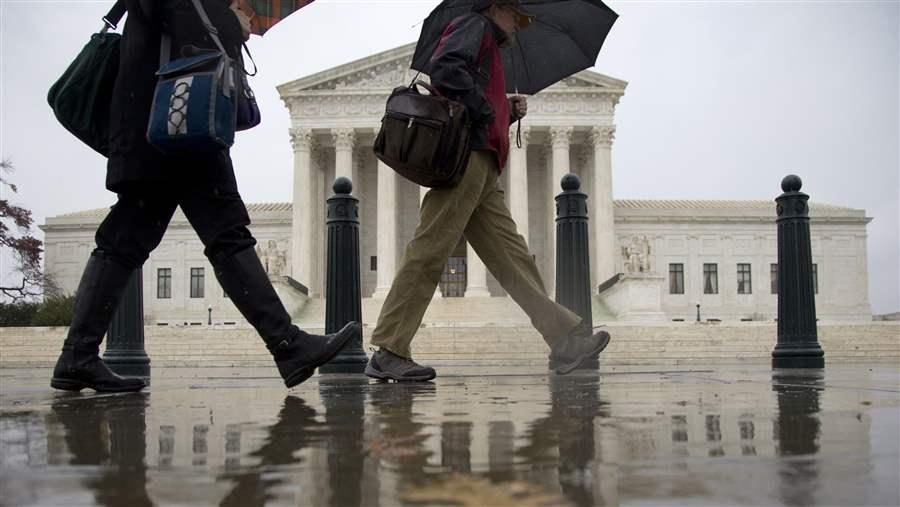 The U.S. Supreme Court will hear arguments Tuesday on whether states can ban judicial candidates from directly asking potential donors for contributions to their election campaigns. (AP)

Do state judicial candidates have a constitutional right to personally ask people and groups for contributions to their election campaigns? Or does that undermine confidence in a fair or impartial judiciary?

The U.S. Supreme Court will hear both sides of the argument—between free speech and preserving the integrity of the judiciary—on Tuesday in the case of Williams-Yulee v. The Florida Bar on appeal from the Florida Supreme Court.

Brought by a former candidate for a county judgeship in Florida, the case has national implications. Thirty-nine states elect at least some of their judges, and 30 states have codes of judicial conduct that ban candidates from personally asking for campaign donations.

Advocates for impartial courts, which have decried the growing amount of campaign money pouring into state judicial races, fear that striking down the bans on solicitation will lead at least to the public appearance that justice can be bought. At worst, they say, is the actual undermining of judicial decisions.

“The fear is judges will be accountable to funders rather than the Constitution,” said Bert Brandenburg, executive director of Justice at Stake, one of several groups that have filed a friend of the court brief seeking to uphold the bans.

Alicia Bannon, who monitors state courts at the Brennan Center for Justice at New York University’s School of Law, said prohibiting a judicial candidate, especially a sitting judge, to call up someone on the phone to ask for money is a “very reasonable” code of conduct.

The biggest donors to state judicial campaigns are trial lawyers and businesses, all of whom are potential litigants before a judge.

Being able to solicit money from them “raises in the most stark terms, the opportunity for a quid pro quo,” Bannon said. “It raises a legitimate question about whether courts are for sale.”

Polls indicate that voters overwhelming think that campaign donations and other special-interest spending on judicial elections influence a judge’s decision on the bench. And a recent study by two Emory University researchers found that campaign money may already be influencing decisions.

However, the U.S. Supreme Court has increasingly equated spending on political campaigns as an expression of constitutionally protected free speech. And lower courts have been divided on the issue of whether judicial candidates can ask for money.

The Arkansas and Oregon Supreme Courts have upheld similar nonsolicitation codes, as did the Florida Supreme Court in the case that justices will hear Tuesday. So have the 3rd and 7th U.S. Circuit Courts of Appeals.

Contrarily, the 6th, 8th, 9th and 11th U.S. Circuits have found that the prohibitions violate freedom of speech protections.