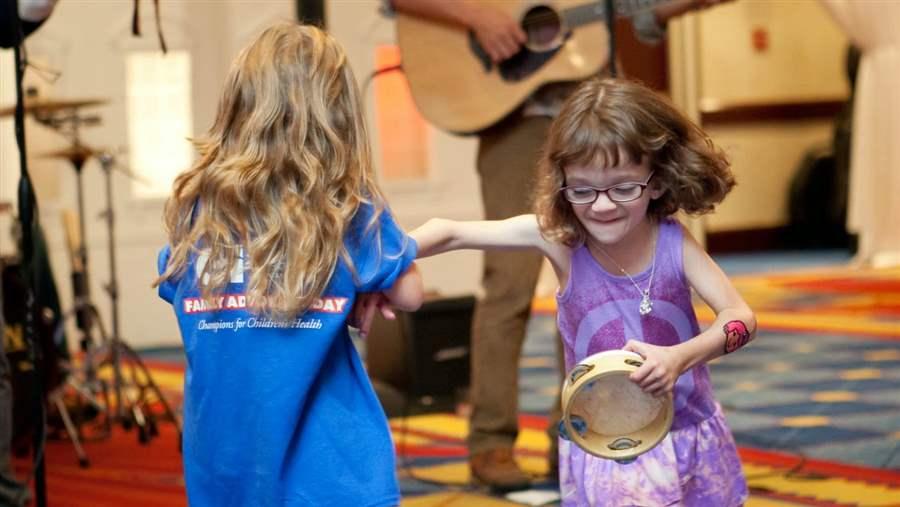 Lily Blackburn, at age 5, dances at a Washington, D.C., event to raise awareness for kids with complicated and often rare medical conditions. Lily is one of 2 million kids served by Medicaid who are considered medically complex because they have two or more life-threatening conditions that require intensive care by a wide array of specialists. (Bonnie Velazco for Children’s Hospital Association)

Finding care for children with medically complex or rare conditions—which may affect fewer than 100 kids nationwide—can force parents to tap into networks of highly specialized physicians and hospitals scattered around the country.

This is especially challenging when the children are covered by Medicaid, because each state-run program has a different benefit package, payment structure and provider network. Conflicting regulations and paperwork requirements can delay treatment and lead to unnecessary hospitalizations. Medicaid’s state-based rules also have thwarted efforts to develop a national clinical database researchers could use to find ways to improve the care of children with rare diseases.

A new bill in Congress would amend the 50-year-old Medicaid law to make it easier for health care providers in different states to coordinate the complicated care of these very sick kids.

The proposal—the Advancing Care for Exceptional Kids Act—also calls for the creation of a national database of Medicaid claims data that researchers could use to study complicated conditions that affect one in 25 children nationwide.

Sponsored by Rep. Joe Barton, a Republican from Texas, and co-sponsored by 116 other members in both houses of Congress, the proposal has broad bipartisan support. Advocates expect it to be introduced in the next few weeks.

In addition to making it easier for families to cross state lines to get care for their children, the bill is designed to cut the cost of caring for kids with medically complex conditions such as sickle cell anemia, cerebral palsy, cystic fibrosis and congenital heart defects. They represent about 6 percent of all children covered by Medicaid, but generate more than 40 percent of the costs for children’s care.

Although the Congressional Budget Office has not yet estimated the savings, the bill’s lead backer, the Children’s Hospital Association, projects federal and state Medicaid spending would be reduced by $13 billion over 10 years.

Backers say care coordination will generate significant savings. Say, for example, the parents of a child with a complex condition call a children’s hospital care coordination program in the middle of the night with an emergency. Ideally, the doctor on-call would be familiar with the child and the care she receives. The doctor could then advise the parents what to do immediately, and arrange an office appointment for the child early the next day. At the visit, the child’s treatment could be adjusted and she could go home the same day. The cost to Medicaid: $50 for an office visit.

Without a care coordination program, the parents would have rushed their child to the emergency room, where she likely would be admitted for a day or two at a cost of several thousand dollars.

The problem is that hospitals that have such programs operate them at a loss, because Medicaid and other insurers won’t pay for them. Without the promise of reimbursement, these hospitals are unable to expand their existing programs to take care of all the children who need specialized care coordination, and other hospitals are reluctant to create their own.

Different Medicaid reimbursement rules in different states also create complications. Many patients at the few children’s hospitals with specialized programs live in another state, and must work within the rules of their home state’s Medicaid program. Additionally, specialists who work with pediatric hospitals are often based in other states, limiting their ability to get paid for their contribution to the care of an out-of-state patient.

Medicaid covers 32 million kids nationwide, more than 40 percent of all U.S. children. The federal-state low-income health plan is particularly critical for parents of medically complex kids, because they often have to quit or cut back on work to oversee the care of their child, causing family income to plummet.

When Medicaid was enacted in the mid-1960s, very few children with complicated and severe medical conditions lived past birth or early childhood. Today, thanks to medical advances, more kids born prematurely or with serious congenital conditions are living longer. About 3 million kids in the United States are defined as medically complex, because they have life-threatening conditions that affect two or more organ systems. The majority, about 2 million children, are covered by Medicaid. That number is expected to double in the next decade.

Children’s hospitals and pediatric specialists across the country began seeking authority four years ago to create regional care networks of hospitals, doctors and other health care professionals within Medicaid that could work together seamlessly to provide better and cheaper care for this growing population, in part by operating under uniform reimbursement rules.

The hope is that other insurers will follow Medicaid’s lead, said Jim Kaufman, vice president of public policy at the Children’s Hospital Association, the primary advocate for the proposal.

The bill would call on the U.S. Department of Health and Human Services to develop national data standards and would allow states to opt into regional provider networks. Parents would also have the option of joining health care networks with their local children’s hospital as the anchor. Ultimately, these professional networks would develop formal business relationships and take on the financial risk of each child’s care.

Lily Blackburn, age 7, was born with what is known as STAR syndrome. She’s one of only 75 kids in the country with the condition. As an infant, she had what’s known as failure to thrive syndrome. Now she suffers from hearing loss, compromised vision, lung and heart problems, gastrointestinal issues, incontinence, and neurological abnormalities of the spine, hands and feet. She also suffers from stage-three kidney disease.

For her first few years of life, Lily’s parents had to juggle care provided by 15 different doctors. Her father was in the military and the family was covered by TriCare health insurance when Lily was born. After her father received an honorable discharge so he could help care for her, the family moved from San Diego to Ohio to be closer to family and better health care. They ultimately qualified for Medicaid.

Only a few pediatric hospitals in a handful of states provide the kind of round-the-clock network of care that kids with medical complexity need. Lily is a patient at one of them.

Rainbow Babies and Children’s Hospital, part of the Case University hospital system in Cleveland, provides a “medical home” for patients such as Lily, including a lead pediatrician, nurse practitioners, social workers, and dieticians. “It has been a saving grace for us,” said Lily’s mom, Chrissie. “For the longest time I was Lily’s case manager. I was her mother and her advocate.” She said she wishes many more kids and parents were so lucky.