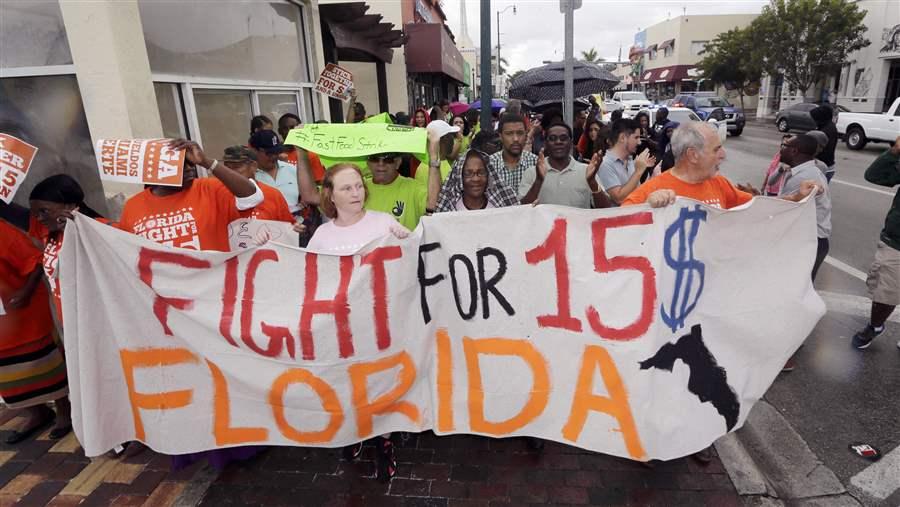 People march for increased minimum wages near a McDonald's in Miami late last year. Activists, fast-food workers and others are calling for increasing the minimum wage to $15 an hour in some cities. (AP)

The minimum wage increased in 20 states at the beginning of this year, and later in 2015 it will go up in Alaska, New York and Delaware. As a result, at least 3.1 million workers will get raises.

For the first time, a majority of states — 29 plus the District of Columbia — have minimum wages above the federal minimum, which is $7.25. The federal floor hasn’t increased since July 2009 and few expect Congress to enact a hike anytime soon, although President Barack Obama has called for an increase.

Advocates, buoyed by a winning streak that has scored increased wages in red and blue states alike, plan to press for even more action in 2015.

“What this shows you is there’s a lot of movement on increasing wages,” said Yannet Lathrop of the worker-advocacy group, the National Employment Law Project (NELP). “This is a really great atmosphere.”

In many states, efforts in the past year to raise the minimum wage have attracted bipartisan support. In November’s elections, which saw an overwhelming wave for Republicans nationwide, voters in four traditionally red states (Alaska, Arkansas, Nebraska and South Dakota) approved increases.

“A lot of Republican governors and states are maybe deciding that hiking the minimum wage is not such a bad thing,” said Aparna Mathur, a labor economist at the right-leaning American Enterprise Institute. Mathur contends policies like the Earned Income Tax Credit would do more to help low-paid workers, but she acknowledged that arguments for a minimum wage increase can gain traction when wages are stagnant.

“The argument always seems to be that if you raise minimum wage everybody is better off,” Mathur said. “They forget that there are adverse consequences as well.” Among them, Malthur said, is that increasing the minimum wage can prompt employers to cut jobs.

The recent success in the states — and in cities such as Chicago, San Francisco and Seattle — has advocates for increasing the minimum wage aiming higher. In recent years, they have pushed to index the minimum wage to inflation. Now they may push to pin increases to median wage levels, which are likely to increase more quickly than inflation.

NELP’s Lathrop said in many cities, a push for $15 an hour will become “the new standard” for advocates. By May, San Francisco will have a minimum wage of $12.25 an hour; Seattle’s will be $11 by April. Chicago has approved an increase that will eventually reach $13 an hour.

Even if there is no further action on minimum wages in 2015, several states and the District are scheduled for increases under previously approved measures. Along with Alaska, (which will have a $8.75 wage starting Feb. 24), New York (which will have a $9 minimum wage by the end of this year) and Delaware ($8.25 by June 1), recent moves in California, the District, Michigan and Minnesota will continue wage increases into 2016. By then, California could have the highest statewide wage in the country, at $10 an hour, unless another increase elsewhere surpasses it.