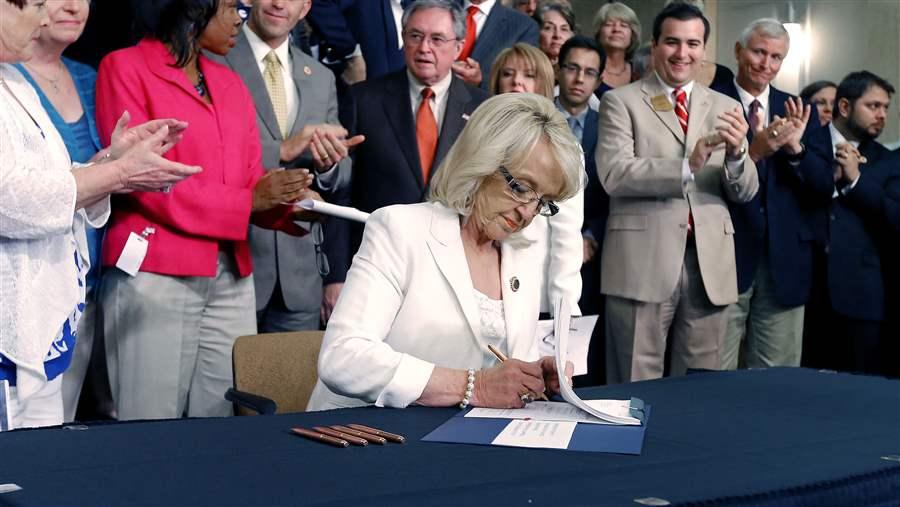 If Arizona gets its way, its able-bodied, low-income adults will face the toughest requirements in the country to receive health care coverage through Medicaid.

Most of those Medicaid recipients, and new applicants, would have to have a job, be looking for one or be in job training to qualify for the joint federal-state program for the poor. They would have to contribute their own money to health savings accounts, which they could tap into only if they met work requirements or engaged in certain types of healthy behavior, such as completing wellness physical exams or participating in smoking cessation classes. And most recipients would be limited to just five years of coverage as adults.

Despite its conservative bent, Arizona already has expanded Medicaid under the Affordable Care Act. In October, however, Republican Gov. Doug Ducey will ask the federal agency that oversees Medicaid to approve changes in the state’s program that are designed to promote healthy behavior in a traditionally unhealthy population, while encouraging people to become less economically dependent on the state.

“The governor wants to help them move from a place of dependence on the state to independence and to be able to take care of their own health needs,” said Christina Corieri, the governor’s health care adviser. (The proposals would not apply to several categories of beneficiaries, including children, pregnant women, the disabled and the elderly.)

Some of Arizona’s proposals have been made in other states, and the federal government has signed off on them. It has rejected work requirements, however, and has never allowed lifetime limits on eligibility.

The work requirement and lifetime limit originated in legislation passed by the Arizona Legislature earlier this year. The law requires the governor to submit the same proposals every year, apparently in the hope that a future Republican presidential administration would look at them more favorably.

Critics say denying health care to people who don’t meet the new standards punishes them for being poor.

“I think in some of [the proposals], we see a punitive strain and an assumption that, left to themselves, people will make bad choices and that we the government will make better choices for them,” said Joan Alker, executive director of the Center for Children and Families at Georgetown University.

The Center on Budget and Policy Priorities, a nonpartisan research organization in Washington, D.C., notes that 60 percent of Medicaid recipients live in a family with at least one full- or part-time worker.

Though Arizona passed its Medicaid expansion in 2013, more recently a number of states have used expansion as an opportunity to gain greater flexibility from the federal Centers for Medicare and Medicaid Services (CMS) in how they administer the program.

For example, CMS has allowed Arkansas, Indiana and Michigan to require or encourage beneficiaries to contribute to tax-advantaged HSAs. Beneficiaries can use the accounts toward copays—the portion of their medical bills not paid by Medicaid—or for health-related services not covered by Medicaid, such as dental, vision or chiropractic care. The idea is to force enrollees to build their own safety net to help cover their health care costs.

In Arizona, beneficiaries would have to contribute up to 2 percent of their annual household income to their HSAs.

But only beneficiaries who meet Arizona’s work requirements or health behavior goals—such as completing well-patient visits or adhering to regimens for patients with chronic conditions—would be permitted to access their HSAs. And beneficiaries earning above the poverty level—$11,770 for an individual—who failed to make their HSA contributions could be suspended from Medicaid benefits for a period of six months; those earning less than the poverty level would be deemed to owe the state a debt.

Other states have received permission to impose similar penalties. For example, Indiana charges a premium to all Medicaid recipients and can cancel the enrollment of those making more than the poverty level for six months if they fail to make their premium payments. The poorest Indiana beneficiaries do not owe a debt to the state if they don’t pay their premiums, but they lose eligibility for enhanced medical services, such as vision or dental care.

Arkansas imposes a debt on the poorest beneficiaries who do not make payments into their HSAs and it can deny Medicaid services to those making above the poverty level for failure to do so.

Arizona, which has 1.7 million Medicaid beneficiaries, also isn’t the first state to try to encourage beneficiaries to adopt healthy behaviors. Several states—such as Indiana, Iowa, Michigan, Minnesota and New York—include what are called healthy behavior incentives in their Medicaid programs, to nudge people to lose weight or stop using tobacco.

In Iowa, for instance, participants are asked to have a wellness examination once a year. People who meet their health targets in Indiana, Iowa and Michigan will see their premiums or HSA payments reduced or eliminated altogether.

Minnesota gives cash or debit cards to beneficiaries with pre-diabetes who participate in a YMCA diabetes prevention program. In New York, beneficiaries can receive cash or lottery tickets for keeping doctor’s appointments or filling prescriptions for nicotine replacement therapy or drugs to manage high blood pressure or diabetes.

If approved by CMS, Arizona’s Medicaid plan would be the first to use deterrents, rather than incentives, to push healthy habits. Those who don’t meet established goals could be shut out from access to their HSAs. (They’d also forgo the chance to reduce their mandatory HSA contributions in the future.)

Arizona is asking permission for two provisions that CMS has not granted to any other state: establishing employment requirements and imposing a lifetime limit on Medicaid coverage.

Indiana proposed a work requirement, but it was shot down by CMS in January. The agency said that while states may promote employment through state programs operated outside of Medicaid, they could not do so under the Medicaid program.

Instead of being able to impose work requirements, Indiana and New Hampshire have had to settle for referring Medicaid applicants to jobs and job training as a requirement for receiving coverage.

Several health advocacy organizations in Arizona object to policies to exclude otherwise eligible people from Medicaid, which they say are contrary to the program’s intent.

“We see some of these proposals as inconsistent with the Medicaid law, which is to have a safety-net program to provide access to health care to a population that doesn’t otherwise have that,” said Tara McCollum Plese, a senior director with the Arizona Alliance for Community Health Centers. “To take these people out of Medicaid at a time they still need health care services is not prudent.”

Some national groups, such as Families USA, agree.

“Medicaid is designed to be an affordable option for people and putting a time limit on it is poor public policy in keeping people covered and healthy,” said Dee Mahan, Medicaid director for Families USA, which advocates for affordable health care. “Lots of people are working at low-wage jobs, and at low-wage jobs on a part-time basis, and their incomes are not necessarily going to increase to the point where they can get out of Medicaid.”

Others question the effectiveness of some restrictions. The Urban Institute, a nonpartisan policy research organization, found that HSAs have high administrative costs. It also said that wellness programs have not been shown to be effective.

On the other side, Americans for Prosperity, the conservative advocacy organization co-founded by billionaires Charles and David Koch, strongly favors the Arizona proposals, particularly the work requirement.

After Arizona submits its proposals to CMS, there will be a monthslong review process, during which there will be room for negotiation between the state and the federal agency.

When then Gov. Jan Brewer, a Republican, won approval for Medicaid expansion in 2013, Arizona’s plan did not include these provisions. The current governor is not threatening to pull back from expanded Medicaid coverage if the federal government rebuffs the state’s proposals, according to Dan Scarpinato, his communications deputy.

“The focus right now is on getting approval on this waiver, and we are hopeful,” Scarpinato said.