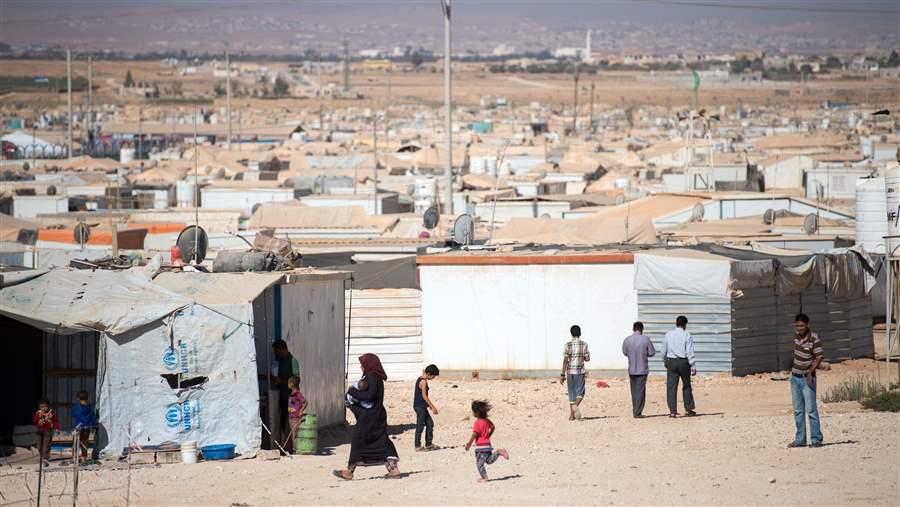 Syrian refugees walk across a Jordanian camp. Only a fraction of Syrian refugees may reach the United States, where the federal government works with nonprofits to determine where they are resettled.

The U.S. plans to increase the number of refugees it takes from 70,000 to 100,000 over the next two years. New York, Los Angeles and 16 other cities have urged President Barack Obama to accept even more refugees from Syria.

But is the country—along with the aid groups that help in resettlement and local communities that receive refugees—ready for an increase in arrivals? And where will the new arrivals go?

The increase could strain America’s sprawling refugee admissions program, a partnership between the federal government, international organizations like the United Nations, nine national nonprofits and their hundreds of local affiliates.

Cities and states may need to spend more money on social services for refugees, particularly if Congress doesn’t approve additional federal funding for resettlement. The Obama administration actually requested some $600 million less for migration and refugee assistance this fiscal year than it did last year.

Still, it can be done, say the groups that help refugees adjust to their new lives in America. “In 1980 we airlifted more than 200,000 Vietnamese refugees, and they are now very, very much interwoven in the fabric of our communities,” said Jen Smyers of Church World Service, one of the nine aid groups.

Who Decides Where Refugees Land?

The United States already accepts more refugees than any other country in the world. In fiscal 2015, 13,831 people came from Myanmar alone. Other top origin countries were Iraq, Somalia and the Democratic Republic of the Congo.

Less than 1,300 refugees came from Syria, of the more than 4 million Syrian refugees registered by the U.N. The Obama administration’s announced increase in refugee admissions will include at least 10,000 Syrians in fiscal 2016.

Parceling out tens of thousands of refugees to U.S. communities takes advance planning. Each week, representatives of the nine nonprofit groups meet in the Rosslyn, Virginia, offices of the Refugee Processing Center, a State Department contractor. Some groups attend via conference call.

Staffers sit around a table and review a thick packet of refugee case files. The files contain the addresses of any family members the refugee wants to join in the U.S., medical information and other personal data. The nine staffers then talk through the cases and match each refugee (or refugee family) with a city and a local nonprofit that can help them adjust to new lives in America.

The U.S. defines refugees as people who cannot return to their country of national origin because of persecution or a well-founded fear of persecution due to race, religion, nationality, social group or political opinion. Before refugees are cleared to enter the U.S., they must undergo a rigorous security check to make sure they’re not affiliated with a terrorist organization or a rebel group.

To decide how many refugees to send to, say, Allentown, Pennsylvania, each year, the State Department considers how many people local nonprofits say they can resettle there. Philadelphia-based Lutheran Children and Family Service (LCFS) settled between 100 and 200 refugees in Allentown, Lancaster and Philadelphia this year; Allentown’s allotment included 39 Syrians.

Every state except Wyoming has a partnership with the federal government and local nonprofits to provide aid to refugees (and Wyoming Gov. Matt Mead, a Republican, has supported starting such a resettlement program).

In fiscal 2015, 2,288 refugees were settled across Pennsylvania, according to the Refugee Processing Center. Compared to Pennsylvania’s population, that’s not a high number. States such as Washington, Minnesota and Michigan take more refugees per 100,000 residents, according to calculations made by The Washington Post.

Allentown is a good place for refugees for a number of reasons, said Janet Panning, program director at LCFS. “Compared to Philadelphia, Allentown has affordable housing. And there are all these good employers who pay more than the minimum wage,” Panning said. It’s also a diverse town, where 40 percent of residents speak a language other than English at home, according to the U.S. Census Bureau.

Most importantly for Syrians: Allentown has a large and well-established Syrian-American population. There’s a Syrian grocery store in town, mosques and an Antiochian Orthodox Christian church. Panning can think of at least one Syrian refugee who was hired right away by a Syrian-American businessman.

LCFS tries to listen to what local leaders—political, medical and educational—say about its efforts. It also consults with Pennsylvania’s state refugee coordinator, a federal employee housed within the state’s Department of Human Services, who distributes federal grants for programs that promote employment, from job placement to day care.

Although cities and states have the opportunity to weigh in on the resettlement process, they don’t have much control over how many refugees are settled where. “We really don’t have any say, to be honest with you,” said Allentown Mayor Ed Pawlowski, a Democrat.

The mayor’s office in Dearborn, Michigan—where, according to the Refugee Processing Center, 112 refugees have been resettled this year, including 52 Syrians—told Stateline it couldn’t recall any formal discussions about refugee placement.

And once refugees arrive in the U.S., they’re free to move about the country like any other resident. Although Wyoming doesn’t have a process for resettling and supporting refugees, they are finding their way to the state anyway, Gov. Mead wrote in an editorial last year.

The big national nonprofits that select and resettle refugees have called for the U.S. to help even more people: 200,000 refugees in fiscal 2016, including 100,000 from Syria.

If Germany says it can handle 800,000 asylum seekers from Syria this year, Smyers and others argue the U.S. can certainly accept more.

Local affiliates, such as the LCFS, say they can manage the increase the Obama administration has planned. For Allentown, the about 40 percent national increase might mean 30 additional refugees.

Lutheran Social Services of Michigan—a sister organization of LCFS—expects to resettle Syrians to the Dearborn area, which also has a large Arab-American population. There may not be enough housing available to settle more refugees in Dearborn proper, so refugees may be housed in surrounding cities like Sterling Heights and Warren, said Cheryl Kohs, the Michigan group’s marketing director.

What’s less clear is where the money to resettle more refugees will come from. As of early September, the U.S. Senate planned to cut funding for migration and refugee assistance by 14 percent, while the House would leave it flat, according to CQ Roll Call.

The $1,975 per refugee local nonprofits receive from the State Department covers 30 to 90 days of furnished housing, help buying food and clothing, and a case manager who can shepherd refugees through what can be bewildering first days in their new country, including tasks like applying for a Social Security card.

The U.S. Department of Health and Human Services also spent over $1.5 billion in fiscal 2015 on grants that fund employment, health and other social services for refugees and protected groups, like victims of human trafficking. Each state’s refugee coordinator receives the funds and may contract them out to community-based organizations. School districts that serve significant numbers of refugee children can also apply for additional funding through an HHS grant.

Where Does the Money Come From?

Federal aid doesn’t cover everything. “Refugees would never be able to resettle based on what’s available in the refugee resettlement pot of funding,” said Charles Shipman, state refugee coordinator for Arizona.

Private donations bolster the services local nonprofits provide. And states and local communities help pick up the tab, too, because refugees—who arrive with little more than the clothes on their backs—are immediately eligible for mainstream benefit programs like food stamps, Medicaid and cash assistance for low-income families. States play a role in funding some of those programs.

When the refugee resettlement program began, in 1980, the federal government reimbursed states for providing cash assistance, Medicaid and supplemental Social Security benefits to refugees for their first three years in the country, said Ann Morse of the National Conference of State Legislatures.

Now, the federal government only repays states for one service: providing eight months of cash and medical assistance to childless refugee couples or single adults, who don’t qualify for family-based benefits.

When refugees first arrive, they virtually all depend on government assistance. But refugees become less dependent the longer they’re in the U.S., said Randy Capps, director of research for U.S. programs at the Migration Policy Institute.

Federal benefits to refugees dry up fast, and programs are geared toward helping newcomers find jobs. When MPI researchers looked at the overall U.S. refugee population in years 2009-11, they found that refugee men were more likely to work than men born in the U.S., while refugee women were just as likely to work as U.S.-born women.

But although many refugees attain self-sufficiency, they remain slightly more dependent on government assistance than U.S.-born residents even after 20 years, the MPI report found. That may be because refugees sometimes lack the education or English skills they need to compete in the labor market, and wind up working low-wage jobs.

New arrivals from Syria, however, are likely to arrive prepared to compete. “Syrian refugees come with a lot of advantages. They’re a very well-educated population, and they often speak multiple languages,” Capps said.

Allentown’s Pawlowski, for one, isn’t worried about more refugees.

His city is among those that have said it would welcome more Syrians. Refugees arrive eager to build new lives, Pawlowski said. Many have an entrepreneurial spirit and start small businesses. On balance, he thinks the families that have arrived over the years have added to the local economy. “I welcome these refugees,” he said.