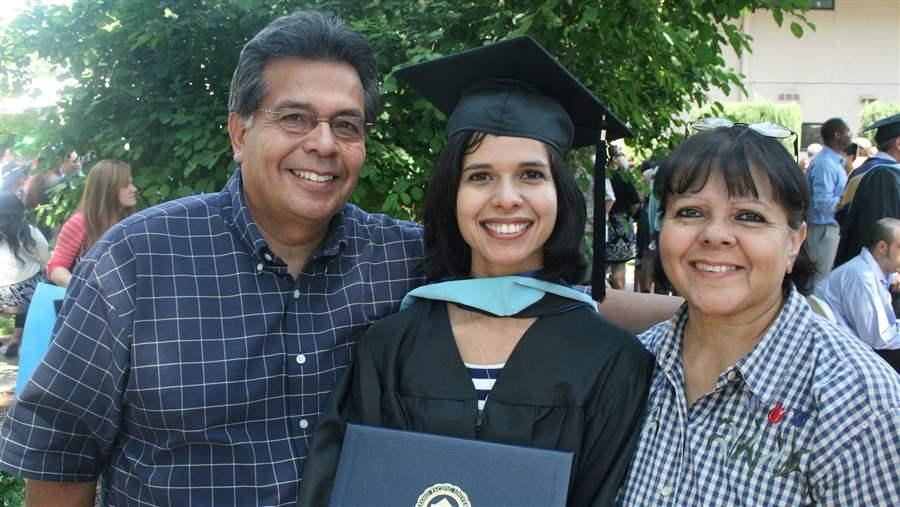 In 2014, Aileen Rizo, depicted here with her parents, Paul and Lupe Rizo, sued her employer for wage discrimination after she says she found out her male colleagues were paid much more. States are addressing the wage gap between men and women.

Aileen Rizo says she loves what she does. A consultant for the Fresno County Office of Education in California, she teaches educators how to teach math. She’s got the experience, 20 years, and the education, two master’s degrees.

But over a casual lunch three years ago, her colleagues shared their salaries. Rizo, 41, the only full-time woman in her office, was startled to discover that some of her male co-workers—including a new hire with less experience and education—were being paid at least $10,000 more than she was. When she confronted her employer, she was told her salary was based on her prior wages. End of story. No negotiating. Rizo sued the county, and her case is pending in U.S. District Court.

While too late to be of any aid to Rizo, the California Legislature this month sent Democratic Gov. Jerry Brown a “pay equity” bill designed to help women in situations like hers. The bill—which some call the strongest of its kind in the nation and Brown has indicated he will sign—attacks the gender wage gap in several ways, including ensuring women who perform similar work receive the same pay as men, even if their job titles are different.

And California isn’t alone in acting. In the absence of legislation from the U.S. Congress, the governors of Connecticut, Delaware, Illinois, North Dakota and Oregon have signed equal pay laws this year. New York legislators unanimously passed a bill that Democratic Gov. Andrew Cuomo has indicated he will sign. And Massachusetts has two bills pending.

Equal pay bills also were introduced in 21 other states, but didn’t pass, according to the American Association of University Women (AAUW), which has lobbied for the legislation.

“If Congress can’t legislate its way out of a paper bag, we’ll go to the state legislatures and the city councils,” said Lisa Maatz, vice president of government affairs for the AAUW. “State legislators are paying attention.”

But some critics, such as Daniel Mitchell of the Cato Institute, a libertarian think tank in Washington, said that the new legislation would put a “catastrophic burden” on businesses.

“The notion that there’s some widespread discrimination in the marketplace, there’s just no real-world evidence for it,” Mitchell said. “They’re trying to give the government widespread authority to make very abstract judgments about the value of a job in the private sector.”

State legislation is important because it provides protections for workers and closes loopholes that employers have used to circumvent state and federal laws, said Fatima Goss Graves, a senior vice president at the NWLC.

Nationally, two bills—the Paycheck Fairness Act, which would penalize employers who retaliate against employees for discussing their salaries with their co-workers, and the Fair Pay Act, which would require equal pay for comparable work—are stalled in Congress.

“States are doing what they can to give workers new tools to address the wage gap,” Goss Graves said, adding that some states, such as California, are providing greater protections than the would-be federal laws.

“This can have a spillover effect,” Goss Graves said. “The wage gap hasn’t changed in a lot of years. Employers pay women less in the same job as men and the laws aren’t strong enough to be a deterrent. This is an issue people want a solution to. They don’t want to wait another 50 years for the wage gap to close.”

While the laws overwhelmingly draw bipartisan support in the statehouses, the California bill faced some pushback for not being inclusive enough. The California chapter of the National Organization for Women opposed it because it didn’t protect lesbian, gay, bisexual and transgender people or men of color, who also face wage discrimination.

The pay gap has barely budged in a decade. In 2014, women working full time were paid 79 cents for every dollar men were paid—a 2-point increase from 2004. At that rate, AAUW estimates, women’s pay won’t catch up to men’s for another 100 years.

Nor does education close the gap. In nearly every occupation, women face pay disparities, according to the Institute for Women’s Policy Research (IWPR), a Washington think tank. If anything, professions requiring college degrees see even greater gaps, said Ariane Hegewisch, study director for the IWPR.

The reasons for the gap are complex. Women sometimes are not as effective as men in negotiating their salaries, women’s advocates and legal analysts say. The “motherhood penalty,” a term for the disadvantages facing working mothers relative to childless women, plays a part. Outright discrimination is often a factor.

Sometimes, however, discrimination by employers is inadvertent. Unconscious bias on the part of employers can create inequitable wage practices, according to Beverly Neufeld, founder of PowherNY, a statewide network for economic equality which advocated for the New York pay gap bill.

“There’s no doubt that equal pay for equal work is the law of the land,” Neufeld said. “The question is, ‘What gets in the way of that law and what is the reality for women in the workforce?’ ”

As was possibly the case with Rizo, Neufeld said that women often start out, right out of school, making less than their male counterparts. Because most jobs offer pay based on previous salaries, they never catch up. And if employers prohibit workers from disclosing their salaries to their colleagues, some analysts say, they’ll never know that they’re being underpaid in the first place.

Due to occupational segregation, women tend to cluster in “pink ghetto” jobs, further contributing to the inequity, according to IWPR’s Hegewisch.

For example, in the female-dominated library sciences field, you typically need a master’s degree to even snare an interview. But in the male-dominated engineering field, a bachelor’s degree is usually all that’s needed to find work. And engineers earn much more than librarians, Hegewisch said.

“Women aren’t getting paid equally for the same job,” said Maatz of the AAUW. “But there’s also this devaluation of what is considered women’s work.”

California was the first state to pass a pay gap law—in 1949, more than a decade before John F. Kennedy signed the federal Equal Pay Act, in 1963. The laws were largely identical, with similar flaws and weaknesses, said Jennifer Reisch, legal director for Equal Rights Advocates, a San Francisco-based national organization that helped draft the 2015 California bill.

Neither law was strong enough to enforce, according to state Sen. Hannah-Beth Jackson, a Democrat from Santa Barbara and the sponsor of the bill in California. Women in California are drastically underpaid, Jackson said, leading to an estimated $33.6 billion in lost wages every year.

“My hope is that this bill will encourage employers to take a close and careful look at their pay practices to ensure that women are being paid equally for substantially similar work, so that complaints and lawsuits can be prevented,” Jackson said.

Her bill, which applies to the private and public sector, would close loopholes that prevent enforcement of existing pay discrimination laws. It would allow employees to discuss salaries with other employees without fear of retaliation from employers. (California legislators also passed a related bill that would prevent employers from asking potential hires about their previous salary history.)

“We hope that this law will be a model for other states and perhaps even for the federal efforts,” Reisch said.

It would ensure that women who perform similar work to men receive the same pay, even if their job titles are different or they work in different offices. Under federal law, employees seeking to make a wage discrimination claim against an employer can only compare their wages to someone in the same workplace.

The California bill also has a “comparable worth” provision, which means that you can’t pay one employee a different rate if you have employees of a different gender doing substantially similar work.

“Hopefully this will motivate businesses to do the right thing from the get-go,” Maatz said. “We want a law that’s strong enough that business will behave proactively.”

Some states and municipalities have tried different ways to tackle the gender wage gap.

In Vermont, for instance, employers are required to print salary descriptions in job advertisements to prevent a potential hire from being haunted by a previous low salary. For the past 30 years, Minnesota has had a “comparable worth” law on the books for state workers. And earlier this year, Democratic Mayor Kasim Reed of Atlanta signed an equal pay law for municipal employees that would require the city to identify pay disparities and find remedies for them.

Rizo said she felt strongly enough about California’s new pay equity bill that she testified and lobbied for it.

But the Fresno County Office of Education said Rizo wasn’t discriminated against.

“I am certain that there has never been any disparity in pay based on gender because men and women are placed on the salary schedule using the same criteria,” said Jim Yovino, the Fresno County superintendent. “We are confident that the case has no merit and have requested the court to dismiss the lawsuit.”

Rizo says that with her lawsuit pending, work is a tense place to be. But quitting her job is out of the question. She’s the mother of three, and her husband is a full-time student. They depend on her income, she said. And as the mother of three daughters, she felt like she needed to fight for equal pay to set an example for them. Quitting would send the wrong message.

Passing the law, Rizo said, “assures me that my fight has not been in vain. I feel victorious no matter what happens with my case.”