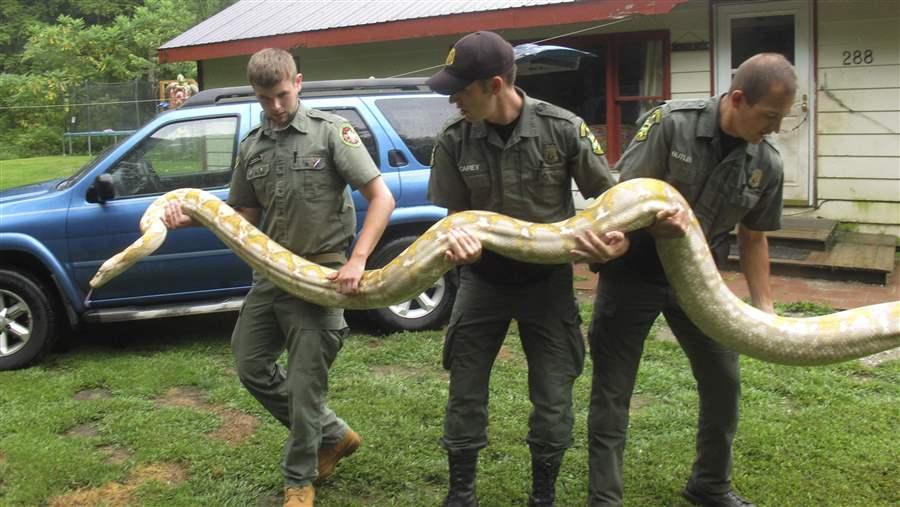 This summer, Milwaukee residents were captivated by reports of what appeared to be a lion-like creature roaming city neighborhoods. Authorities set up a dragnet and traps, but the big cat was never located.

Wisconsin state Sen. Van Wanggaard, a Republican, wasn’t surprised to hear of a wandering wild feline. He already was so concerned about the threat posed by dangerous exotic pets that he’d been crafting a bill to limit private ownership of them.

Wanggaard wants his state to join dozens of others that have passed laws banning or regulating big cats, bears, apes and other exotic pets, which animal welfare advocates say can threaten public safety when they escape and are at risk of being poorly cared for by private owners.

Although it’s difficult to determine exactly how many exotic creatures are privately owned, the Humane Society of the United States says they are part of a multibillion-dollar industry. Born Free USA, a wildlife conservation and animal welfare group opposed to private ownership, estimates that between 10,000 and 20,000 big cats alone are in private hands in the U.S. And because the federal government largely leaves it to the states to regulate exotic animals, legislatures have been grappling with the issue.

Since 2013, legislation that deals with exotic pet ownership has been proposed in more than a dozen states, including Wisconsin, according to Born Free. Of the 22 measures filed, 18 have failed and two have passed, including one that created an exemption allowing the owner of a Louisiana truck stop to keep his tiger, Tony, as a roadside attraction. Two remaining measures are pending, including Wanggaard’s in Wisconsin and another in Pennsylvania.

Opponents say many owners are ill-equipped to house and care for exotic pets, putting them in cages and enclosures that don’t meet the creatures’ basic needs.

“Wildlife belongs in the wild. It’s risky for everyone involved,” said Kate Dylewsky of Born Free. “It’s cruel to the animals to keep them in confinement, often isolated from members of their own species. And most people don’t have knowledge or the resources to care for these animals properly.”

Many exotic pet owners, breeders, private zoos and sanctuaries disagree. They say that state bans can hurt efforts to protect animals. And, some argue, the states shouldn’t meddle with an individual’s decision about what kinds of pets to keep.

Good regulations could help protect these animals, said Lynn Culver, executive director of the Feline Conservation Federation, which represents owners, breeders, private zoos and sanctuaries that keep wild cats. “But these [ban] laws are designed to stop future generations and clamp down on current populations.”

Culver said exotic animals need to be kept in captivity so they can breed. “They are the offspring of animals that were taken out of the wild. We’re morally obligated to manage them responsibly for future generations.” 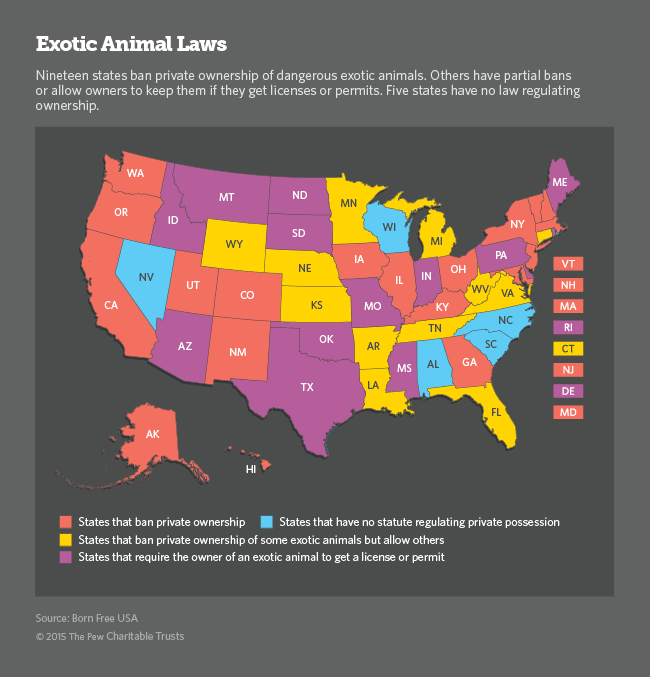 Federal laws restrict the sale and transportation of some exotic and wild animals, but don’t generally address private ownership. That falls to the states, which take a variety of approaches.

Some state laws specify which species are banned or regulated. The Wisconsin proposal lists several types of exotic animals that would be considered dangerous—including non-native big cats and bears, gorillas, chimpanzees, alligators and crocodiles. Others are more general, said David Favre, a professor at the Michigan State University College of Law and director of the Animal Legal & Historical Center, a website devoted to animals and the law.

“It usually takes some horrible event in a state, where people say, ‘How did you let this happen?’ for the legislature to act,” Favre said.

That’s what occurred in Zanesville, Ohio, after a suicidal man released more than 50 big cats, bears, primates and wolves in 2011. Police and animal control officers tried to use tranquilizers, but couldn’t control the situation and were forced to kill most of the animals.

At the time, Ohio had no law dealing with dangerous exotic pets. After the Zanesville incident, the Legislature in 2012 banned their possession or acquisition. Those who already owned such pets were allowed to keep them, but they had to apply for permits and comply with safety and care standards.

In Connecticut, the Legislature amended its law in 2009 to ban the private ownership of some primates after an incident that year in which a woman was blinded, lost both hands and had much of her face ripped off by her friend’s 200-pound pet chimp.

Wisconsin is one of five states without a law regulating the private ownership of dangerous exotic animals, according to Born Free. Fourteen states require licenses or permits. Twelve allow ownership of some exotic animals but prohibit others. And 19 have bans on a number of species.

Last year, West Virginia, which had not had a law, passed a measure that prohibited private possession of lions, tigers, bears, elephants and most primates. Owners were grandfathered in, provided they are registered. The rules went into effect earlier this year.

“When you don’t have any checks and balances in place, it was wide open for people bringing these exotic animals into our little state,” said former Democratic Del. Randy Swartzmiller, who introduced the bill. “The majority of the Legislature saw this as a bill that was not only going to protect people but also the well-being of these animals.”

“In some of these states, it’s very hard to have a conversation about it,” said Born Free’s Dylewsky.

To pass laws, legislators and the public often must be educated about the potential threats to public safety and the animals’ well-being, said Nicole Paquette, vice president of wildlife for the Humane Society. Also, debates about which animals should be covered by new laws are usually heated.

Zuzana Kukol, co-founder of REXANO, or Responsible Exotic Animal Ownership, a nonprofit that advocates for exotic pet owners’ rights, opposes bans, saying they don’t really work. “Do bans on drugs or prostitution work? If people want it, they’re going to get it.”

Kukol, who with her fiance lives in rural Nevada and owns lions, tigers, bobcats, cougars and other exotic animals, dismisses the public safety argument. “The regular population isn’t getting killed by tigers and lions on the way to the store,” she said. “They’re much more likely to be killed by a drunk driver.”

Kukol said that many counties and cities already have regulations governing exotic animal ownership. In her area, she said, the county does an inspection every year and requires her to get an annual permit.

“I don’t think states should micromanage,” Kukol said. “They should take care of the roads, not worry about exotics. They are not telling me how many dogs or horses I can have.”

Wanggaard, who introduced the Wisconsin measure last month, points to a case in Kenosha two years ago. Police were called to a house where they found five rattlesnakes, a crocodile, two alligators and a poisonous Gila monster, and, dead in the backyard, an alligator and a snake. While these types of incidents have cropped up over the years, Wanggaard said, the recent Milwaukee lion scare might be the impetus needed to pass legislation.

Under his proposal, private possession of many dangerous exotic animals would be prohibited. Those who already own them would be able to keep them—but not to acquire any others—if their municipality allows it and they are registered. The proposal would exempt accredited zoos, wildlife sanctuaries and circuses.

A police officer for 30 years, Wanggaard said that he recalls times when police would respond to domestic violence calls and, arriving at a home, find a bear or an 8-foot alligator. “Not only is it dangerous for the officer, but these animals often aren’t being maintained in a humane way.”

Wanggaard said that exotic pets also put a strain on emergency services, noting that in Milwaukee this summer, 30 or 40 officers were busy trying to corral the lion.

Wanggaard, who is vice chairman of the Senate majority caucus, said that if his bill becomes law, authorities will have a better handle on where exotic animals are located and whether they’re legally allowed.

“We have hours of discussion in our towns and villages about somebody raising five chickens in their backyard,” he said. “We’re regulating that, but we won’t regulate it if you have a lion or a baboon in your basement.”