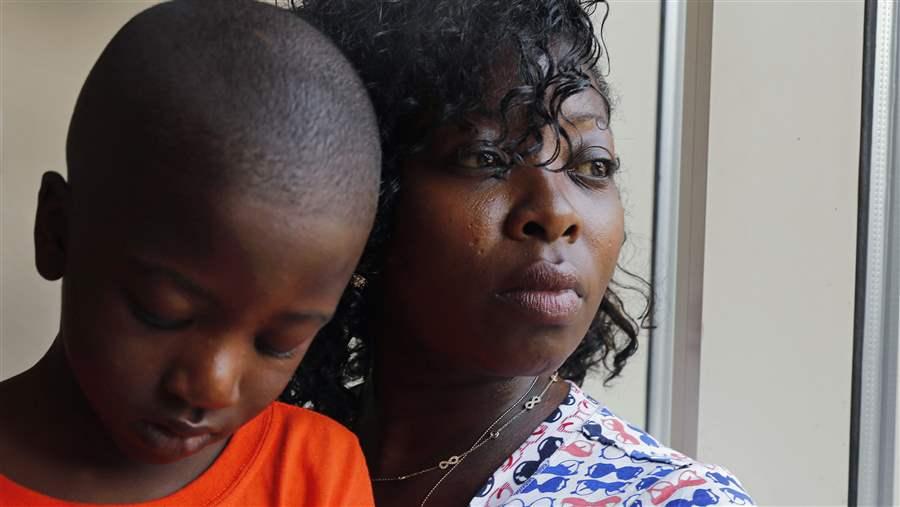 Stacy Rutledge and her son, Donovan Burden, 4, at a day care center in Chicago. Rutledge is one of a growing number of people feeling the pinch of Illinois’ budget impasse as programs are reduced or eliminated. More than half a dozen states began fiscal 2016 without a budget.

In a state that fails to approve its budget on time, the residents who feel the effects range from domestic violence victims to teaching aides. This year, an unusually large number of states found themselves having to scramble to ease the damage wrought by “overtime” budgets.

States are up against varying challenges, but most of them face the same overarching problem: slow revenue growth, even years after the end of the Great Recession. Pent-up demand in education and infrastructure, coupled with resistance to tax hikes, has made it even harder to craft spending plans.

More than a half-dozen states failed to pass a budget by the constitutionally mandated deadline, June 30 in all but four states. To keep government running, some states approved a “continuing resolution” for a period of days, weeks or months to maintain spending while budgets are worked out. Others invoked provisions in their statutes or constitutions to keep government operating during the budget wrangling.

Illinois and Pennsylvania are stuck in budget impasses, with no end in sight. New Hampshire and North Carolina reached deals in recent days, but only after significant disruptions. In Wisconsin, Republican Gov. Scott Walker clashed with members of his own party over road construction, a new arena for the Milwaukee Bucks basketball team, and the state’s prevailing wage law before finally signing a two-year $72.7 billion budget.

Squabbling, among legislators and with the governor, postponed approval of Massachusetts’ budget until 17 days after the start of the new fiscal year and pushed approval of budgets to the brink in Connecticut, Delaware and Washington. Alabama had threatened to go to overtime, but lawmakers last week passed a budget before the state’s fiscal year begins, Oct. 1.

The difficulties didn’t always occur in states where one party controls the legislature and the other holds the governor’s office. In single-party states like Kansas (Republican) and Connecticut (Democratic), budget negotiations broke down over spending priorities, lower-than-anticipated revenue and pledges of no tax hikes.

Over the past decade and a half, about 20 states, at one time or another, started their fiscal year without a budget, according to the National Conference of State Legislatures and an analysis by the Pew Charitable Trusts (Pew funds Stateline). In fiscal 2012, 2013 and 2015, two states operated without a budget for a period of time.

“I do think it’s disruptive,” said Brian Sigritz, director of state fiscal studies for the National Association of State Budget Officers. “You see the impact on services and citizens can be impacted. And, it can make it more difficult to pass a budget on time later on if there’s this precedent that the budget isn’t passed by the end of the fiscal year.”

In Illinois, the budget impasse has persisted for months. Legislators have approved emergency spending to pay state employees and open schools on time. But state employees’ health providers’ insurance bills haven’t been paid for weeks and social service agencies say they are running out of money to pay for nearly four dozen programs, including after-school programs for teenagers, early childhood interventions for poor kids and domestic violence services.

Illinoisans got riled when the state stopped paying out lottery prizes over $25,000, while continuing to run ads urging state residents to play.

“What we do know is that the state continues to operate the lottery and collect money and that money is on deposit and the state is earning interest on it,” said attorney Tom Zimmerman, who has filed a class action suit on behalf of some of the winners. “If any business did this, they would be shut down by the state. They advertise that you can be an instant winner with an instant payment but yet they failed to inform the public [that they weren’t paying].”

Jayme Odom, spokeswoman for the Illinois Lottery, said the lottery can’t make the larger payments without authorizing legislation contained in the budget. Odom said winners can claim prizes under $600 at retailers and prizes under $25,000 at the lottery claims center.

Not good enough, Zimmerman said. “They continue to sell tickets with that misrepresentation [of possible winnings],” he said.

After a three-month stalemate, the North Carolina General Assembly approved a two-year budget that Republican Gov. Pat McCrory signed just before the third temporary state spending measure was to expire, at the end of this month. The budget plan will spend about $21.7 billion in its first year. It includes less money than the House originally approved, but expands funds for teaching assistants and driver’s education.

Steve Curtis, finance officer and director of auxiliary services for the Pamlico County school system, said it would be early October before the district received money for teaching assistants or driver’s ed. But since school has already started, the county went ahead and continued driver’s ed, and was prepared to use county funds indefinitely for the program, had the state not come through. Hiring new teaching assistants, however, was put on hold, forcing existing staff to do double- and triple-duty.

“A lot of school systems suspended their driver’s ed programs until they found out what the state was going to do,” Curtis said, noting that his district was one of the lucky ones which found some money. But overall, the situation has left him frustrated.

“It’s ridiculous,” he said. “We have to have a budget by June 30 in Pamlico County. The state apparently doesn’t have to adhere to the June 30 deadline. This budget was the longest they have gone in the past 13 years. Now we are looking at October, not July. It’s very frustrating.”

It also took New Hampshire three months beyond deadline to approve a two-year budget. The Legislature and Gov. Maggie Hassan agreed on an $11.3 billion plan that will cut the state’s two largest business taxes and give a pay raise to state employees. While the Democratic governor and the Republican Legislature had their differences, Republicans were divided among themselves, too.

The split in the New Hampshire GOP resembled intraparty disputes in other states. The biggest was over the size and phase-in schedule of proposed tax cuts. In addition, some Republicans wanted to include in the budget a voter residency requirement that had not survived an earlier Hassan veto. The party also was split over funding for social services such as Meals on Wheels and aid for the developmentally disabled.

The situation was different in Pennsylvania, where Democratic Gov. Tom Wolf vetoed the budget approved by the Republican-controlled Legislature, claiming it was not balanced. The plan also did not include Wolf’s proposed increase in education spending, or his plan to lower property taxes, raise sales and personal income taxes, and levy a severance tax on natural gas drilling.

Also in dispute: Whether to privatize state-run liquor stores. Wolf vetoed a bill that would have but countered with a proposal to lease stores to a private entity to manage.

The Pennsylvania impasse is not over. Republicans in the Legislature are readying another stopgap budget that Wolf has threatened to veto.