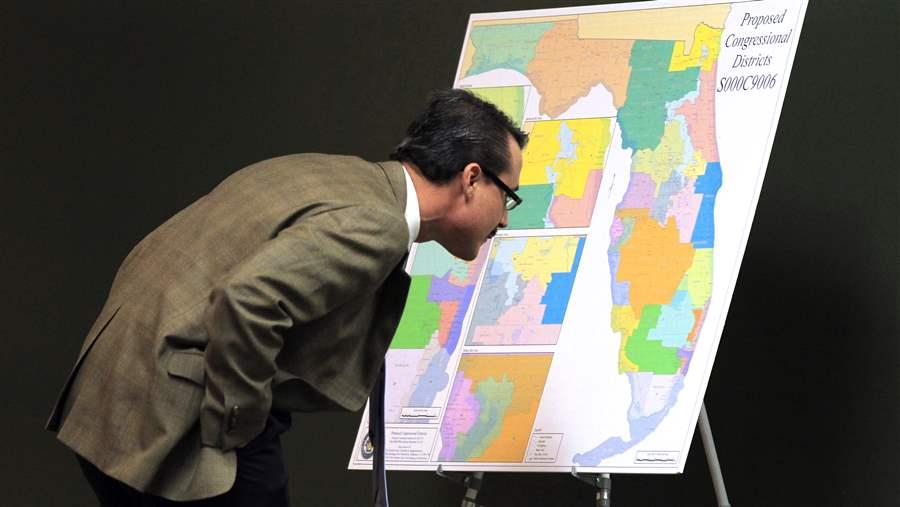 Florida state Sen. Rene Garcia, a Republican, examines a proposed map for the state’s congressional districts that later would be thrown out by the state’s Supreme Court. As legal challenges pile up, some states are considering turning redistricting over to commissions.

After one of the most litigious rounds of redistricting in recent history, movements have popped up in at least five states to take the power to draw legislative and congressional maps away from legislators and put it in the hands of commissioners.

The task of redistricting, done every 10 years after the U.S. Census counts the population, falls on state legislators in most states. But over the last five years, maps drawn by legislators in 40 states have been challenged in court amid accusations of gerrymandering or attempts to dilute minorities’ voting power. And the idea of a commission doing the mapping, even if it still required legislative approval, is attracting new interest.

Legislators in Florida and Wisconsin are considering bills that would establish commissions to draw the lines. Republican Gov. Larry Hogan of Maryland has created a task force to examine the state’s redistricting process and how it can curb gerrymandering. Indiana, Nebraska and North Carolina also considered bills this year but they did not pass.

Twenty-three states have some sort of commission involved in redistricting. But they are a relatively recent development in the history of redistricting and their makeup varies widely, which leads some political scholars to say it’s unclear whether commissions do a better job than state legislators.

“The jury is still out, but there is a growing consensus that commissions are not any worse and are perhaps better,” said Michael Li, redistricting counsel at New York University’s Brennan Center for Justice. “Where you have commissions there seems to be a lot less contentious and protracted litigation, you often have more competitive districts, and you tend to have more moderate people get elected.”

But Bruce Cain, a political science professor at Stanford University, said his research suggests that commission plans tend to fare equally in court when it comes to whether the maps they draw are rejected or upheld.

Proponents of independent commissions say legislators have a conflict of interest and too much political know-how to avoid drawing maps in their favor—something they say results in representatives picking their voters instead of voters picking their representatives. As Stateline has reported, the large number of recent court cases suggests accusations of gerrymandering have been on the rise.

Many legislators balk at the idea of being stripped of redistricting power. That was the case in Arizona, where the Legislature challenged the independent redistricting commission approved by voters in a 2000 referendum. Arizona House Speaker David Gowan, a Republican, said the U.S. Constitution (Article 1, Section 4) gives state legislatures redistricting power.

Although four members of the five-member Arizona redistricting commission are chosen by legislators, an independent fifth member, the commission’s chairman, is selected by the four commissioners.

Gowan questioned whether the commission’s chairman, or for that matter the other members, should be given such an important task without first being vetted by the voters. “Those people are appointed and therefore not held accountable,” he said. “I have to get elected every two years.”

The U.S. Supreme Court, however, earlier this year upheld the constitutionality of the Arizona commission.

Tim Storey, who studies redistricting at the National Conference of State Legislatures (NCSL), said the makeup of some commissions can be as political as that of legislatures, though commissioners’ motives may not be as transparent.

“If the goal is to regulate the partisan influence of redistricting, do you need a commission or do you need tougher rules?” Storey said. “Is it who does it or how they do it? It’s better to focus on the criteria.”

That’s a question being raised after Florida instituted tougher rules for legislators with a voter-approved constitutional amendment in 2010, which bars them from drawing districts to favor an incumbent or a political party.

However, legislators did not follow the rules. Florida’s Supreme Court threw out the state Senate and congressional maps, and the Senate later admitted to drawing lines with partisan intent.

State Rep. Evan Jenne said the constitutional amendment clearly wasn’t sufficient to take the partisanship out of redistricting. Jenne and other Democrats in the GOP-controlled Legislature are backing a bill that would create an advisory commission charged with drafting maps, which the Legislature would then approve.

Jenne Pamela Goodman, president of the League of Women Voters of Florida, which helped sponsor the amendment, said it may be time to explore whether a commission would be a good addition to the tougher rules.

“We would need to start doing research on commissions in other parts of the country, how big they are, who serves on them, how they are selected, what are their qualifications,” Goodman said.

Commissions now in place vary widely in their composition and power. And their recent arrival makes it difficult to assess their effectiveness or which form of commission works best.

Some have over a dozen members, while in Arkansas, the commission consists of the governor, the attorney general and the secretary of state. In New Jersey, the leaders of the General Assembly and of the Senate choose members to serve on a map-drawing commission, while in California, legislators’ influence on the selection of commissioners is much more limited.

And in some states, the commission does not bear all the responsibility for redistricting. Many states, including Maine, have advisory commissions design the maps, which are later approved by the legislature. In Iowa, nonpartisan legislative staff draft maps for review by the Legislature. There are also backup commissions, as in Texas, which only come into play if the legislature fails to produce a map.

“Those backup commissions are partisan creatures,” said Michael McDonald, a political science professor at the University of Florida, adding that they are usually made up of a small group of elected officials who can make a map without going back to consult the legislature.

“Generally, model reformers like commissions where the people are vetted, it acts independently from the legislature, they act in sunlight and have well-established criteria to meet to approve a map,” McDonald said.

Arizona and California are often touted as the states that best fit that model.

“California has the most robust set of methodology, and it’s probably about the most neutral you can get,” in terms of removing legislators from the process, Storey said.

California’s citizen commission began operating after the 2010 census. An initial pool of almost 30,000 applications was narrowed significantly by the state’s auditor, and further trimmed by legislators. Once eight commissioners were selected, six more were picked from the remaining applicant pool to form a 14-person commission comprising five Republicans, five Democrats and four independents.

Karin Mac Donald, who heads up California’s redistricting database, stored at the University of California Berkeley and used to draw the lines, said redistricting since the 2010 census differs substantially from when the Legislature had been in charge.

“When the Legislature does it, they tell the line drawer what they want to see in a district. It’s tailor-made to be incumbent-friendly. This was definitely incumbent-unfriendly. We didn’t even know where they lived,” Mac Donald said.

Mac Donald said she thinks California’s model proved successful because it attracted skilled and knowledgeable commissioners—one is a former Census Bureau director—and avoided the conflict of interest present in the Legislature.

But Storey, of NCSL, said it’s impossible to completely avoid conflicts of interest in an inherently political process.

“It’s a very small number of people drawing these maps,” he said, “so you’ve got to hope they’re very independent and that their motives are very clear.”