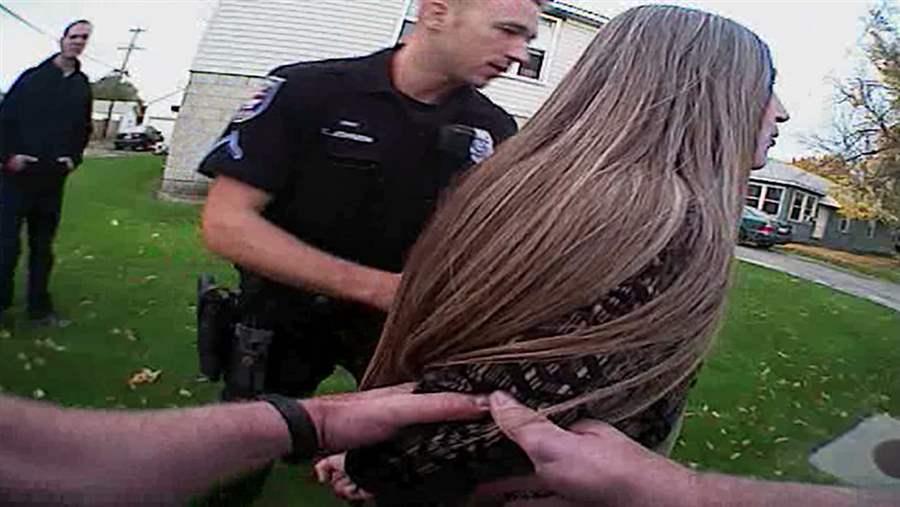 A body camera shows police in Spokane, Washington, making an arrest. Police body cameras are becoming more popular, but some lawmakers want to restrict public viewing of the footage. (Spokane Police Department via The Associated Press)

The images inside the police cruiser are fuzzy, impossible to discern until a laptop glows and street lights illuminate the dash. A few minutes pass and the officer is on foot, approaching a white sedan. There are flashlights in the darkness, and maybe that’s the light of a shopping center in the distance.

The half-hour video, which looks like it was shot through a Vaseline-smeared lens, is among hundreds of hours of recordings from body cameras the Seattle Police Department has uploaded to YouTube. Before roughly 800 officers begin using the cameras next year, Seattle police want to know whether posting the videos online is an efficient and affordable way to ensure the public can access them. The videos are “redacted” so that viewers cannot identify the people in them.

As police departments across the country equip their officers with body cameras, many are struggling to strike a balance between the public’s right to know and privacy protections. This year 10 states—Arizona, Florida, Georgia, Maryland, Nevada, North Dakota, Oklahoma, Oregon, South Carolina and Texas—have passed laws concerning public access to the footage, according to the Reporters Committee for Freedom of the Press, a nonprofit group that assists journalists.

The South Carolina law exempts footage recorded by the cameras from public disclosure under the state’s Freedom of Information Act. A Georgia law that took effect in July limits who can request the videos and pending legislation would deem the videos “records of law enforcement” and not subject to disclosure under that state’s public records law.

In South Carolina, the goal was to protect the privacy of people recorded by police, according to Democratic state Sen. Gerald Malloy, who sponsored the legislation. Malloy noted that the measure allows people with a direct interest in a body-camera video, including the state attorney general, law enforcement agencies and subjects of recordings, to watch it.

“What you want is to have some responsibility,” Malloy said. “[So] you don’t just have everyone requesting it, placing it on the Internet, those kinds of things.”

Earlier this month in Washington, D.C., Democratic Mayor Muriel Bowser proposed legislation that would restrict public access to police videos of assaults and limit what people can review if charges are brought against an officer. In Minnesota, 16 cities have petitioned to make the videos private until legislators decide otherwise.

But Adam Marshall, a legal fellow with the Reporters Committee, called the public records restrictions a “misguided effort” that is unnecessary and risks complicating existing public records laws. “Our position is that almost all are duplicative or unwarranted.”

Existing privacy standards cover which body-camera videos cannot be released, he said, and creating more regulations might hide police misconduct from the public.

“We don’t disagree by any means that there may be body-camera videos that shouldn’t be disclosed under public records laws,” Marshall said. “It seems bizarre to say that if a police officer did something inappropriate and the police officer was inside their home and not on their front porch, then the public wouldn’t have access.”

The Seattle Police Department seeks to protect people’s privacy by heavily redacting the dashboard- and body-camera images it posts. People can sift through video by date and other tags to find a specific incident, and then file a public information request to view an unedited copy, expediting public access to certain videos and conserving police resources, said Mike Wagers, the department’s chief operating officer.

Officials in the department, which has been operating under a federal consent decree since 2012 when the U.S. Department of Justice identified a pattern of excessive force among officers, realized they had to address public access last year, when a local man requested all of the videos from the city’s in-car police dash cameras.

Watching and appropriately redacting the roughly 2 million dashboard videos was impossible, Wagers said, prompting him to host hackathons in the hope that members of Seattle’s high-tech workforce would find efficient, automated ways to make the videos available as required by Washington’s Public Records Act.

The amount of time needed to manually redact videos may prompt some police departments to shy away from implementing body-camera programs. Jay McDonald, national vice president for the Fraternal Order of Police (FOP), said some agencies estimate it takes about two hours to redact one hour of footage by hand.

In Seattle, hackers wrote codes to automatically distort the dash- and body-camera videos in various ways before posting them to YouTube, where the police department temporarily publishes the footage, Wagers said. He is hopeful companies making body cameras will eventually offer built-in options for redaction.

Police department records account for more than 75 percent of Seattle’s public disclosure requests, about 6,000 requests this year, he said. During the pilot program, which wrapped up earlier this year, 12 officers wore the cameras and the department uploaded selected footage ahead of next year’s roll out to all patrol officers.

Department officials are now determining what types of redacted video they should post online. They likely won’t upload videos taken inside homes or images of juveniles or sexual assault victims, Wagers said.

“We’re not going to put things on the site that are going to revictimize someone or really isn’t in the public interest,” he said.

This attempt to automate access to videos for the public is a good first step, said Jared Friend, who works on technology and liberty issues at the American Civil Liberties Union of Washington. But Friend said the redacted videos aren’t particularly helpful because it is so difficult to determine what is going on, and that the public should have access to unredacted versions.

“It is really important that the public has an unedited view of what transpires in events where police involvement is called into question,” he said.

High-profile deaths involving police have spurred both policing reform advocates and law enforcement officials to lobby for camera policies. The cameras, their costs and the price associated with storing and disseminating their data have created roadblocks in some jurisdictions, and the federal government has responded with a $20 million pilot program to equip local law enforcement officers with the devices.

The ACLU has drafted model body-camera legislation for states. Under the sample legislation, police would only be required to release footage that is covered by automatic 3-year retention policies for certain kinds of recordings. Videos that are required to be kept are typically ones that illustrate a use of force, result in a felony-level arrest or complaint, or have been requested by a law enforcement officer or subject of a video.

No state has adopted the ACLU law outright, though the law in Maryland closely mirrors it, said Chad Marlow, an attorney with the ACLU. North Dakota and Florida recently enacted measures that would exempt from public records requirements videos taken in private places, like someone’s home.

Footage from body cameras should be treated in line with other government documents because the devices collect information on private citizens, said Jay Stanley, a senior policy analyst for the ACLU.

Those records should be available for review, Stanley said. “Police officers are going to wear body cameras and they will be routinely collecting photographs with the potential to invade privacy in a way that government does not ordinarily do, and I think that’s the biggest issue,” he said.

But McDonald, of the FOP, said public information laws need to be adapted to manage body cameras. Protecting private citizens is the chief reason police officers want to carefully regulate which videos can be released, he said, pointing to videos recorded during routine patrol duties, like visiting a home during a domestic argument, as footage not to be released.

“No crime has been committed, but now we have a video that could be used to ruin somebody’s life,” he said.