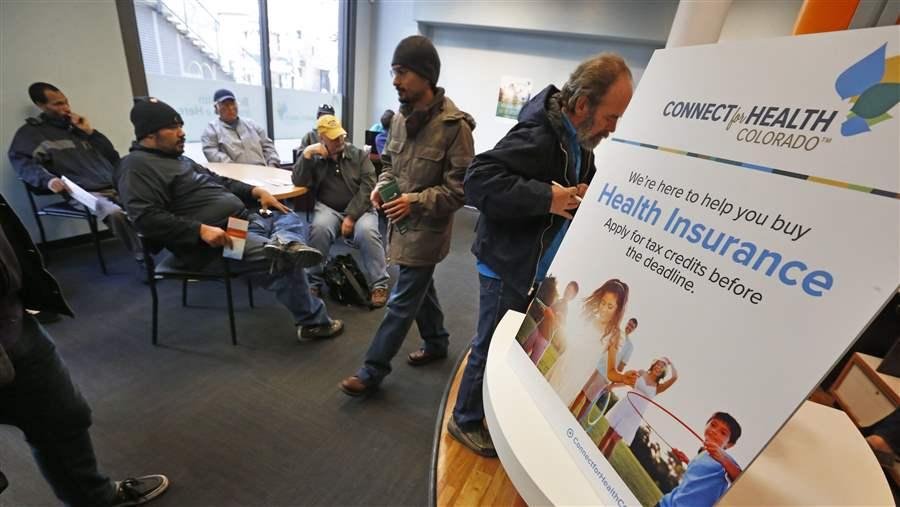 Coloradans wait to sign up for insurance on the Colorado health exchange last March. As in many regions of the country, one of their choices was a health insurance co-op.

This story has been updated to correct figures provided by Health Republic Insurance of New York.

In just the last two months, health insurance cooperatives in Louisiana and Nevada announced they were going belly up at the end of the year. They followed another, operating in Nebraska and Iowa, which had been ordered by a state court to liquidate.

Meanwhile, the inspector general of the U.S. Department of Health and Human Services (HHS) reported in July that 21 of the 23 co-ops created under the ACA had ended 2014, their first year of operation, with net losses, and 13 had failed to meet their enrollment goals. A recent Politico analysis found that co-ops had lost about $200 million in the first six months of this year.

The nonprofit co-ops, or “consumer operated and oriented plans,” created by medical professionals, business groups and others, were intended to give consumers shopping on the new health insurance exchanges an alternative to plans from traditional commercial carriers, such as Blue Cross Blue Shield, Cigna and Kaiser Permanente. The goal was to increase competition and lower premiums for everyone on the exchanges, where individuals and small businesses can shop for health insurance. To get started, the federal government leant them more than $2 billion at low-interest rates.

Before the recent failures, there had been 22 co-ops with a million members operating in 23 states, according to the National Alliance of State Health Co-ops. But insurance experts expect even more to fail because they aren’t able to collect enough in premiums to cover their members’ claims.

The failures are forcing policyholders in four states to find new insurance plans. And, at a time of consolidation in the commercial insurance industry, the failures are heightening concern about declining competition and the prospect of higher premiums.

Health care experts insist, however, that it’s way too soon to declare that co-ops are doomed. Even in the face of disadvantages that hamstrung co-ops from their inception, including strict rules on how they could spend the loan money and what services they were required to provide, some seem to be financially stable. This suggests that they will remain a potent alternative in some areas if they can keep their premiums competitive and provide wide networks of medical providers—particularly in places where consumers want something other than a large, commercial enterprise.

“They were all starting from scratch and that’s a very difficult way to come into the market in any industry,” said Deborah Chollet, a senior fellow at Mathematica, a policy research organization. “Even so, in some regions in the right conditions, I think they can do quite well.”

In fact, after shaky performances in 2014, co-ops have showed some strength. In 2015, co-ops operated in 36 of 73 regions examined by the Urban Institute (up from 26 regions the previous year). In 22 regions, co-ops offered the best prices in the market.

Health insurance co-ops were the result of compromises—grudging compromises—as the ACA was being crafted. As the prospect for a single, government-run health plan collapsed during congressional debate in 2009 and 2010, proponents were eager to provide consumers with an alternative to commercial insurers. Over the objections of the insurance industry, advocates seized on the membership-run, nonprofit co-ops, which, their supporters said, would be focused on meeting the needs of their enrollees, and not the corporate interests of their management and shareholders.

An early proposal would have made $10 billion in federal grants available to help launch co-ops in all 50 states. That amount was eventually reduced to $2.4 billion and came in the form of loans, rather than grants; all 23 co-ops took federal loans as they began operations.

According to critics, the law included obstacles to obtaining outside financing and inflexible pay-back requirements for the federal debt. It also restricted the way loan money could be used, including a prohibition on using the funds for advertising. “If you’re an upstart with no name recognition, and yet you can’t use any loan money for marketing purposes, well that hamstrings you from the beginning,” said Kelly Crowe, CEO of the co-op alliance.

A decision by the Obama administration also allowed people to remain in health plans that existed before the ACA but did not comply with all of the law’s requirements. That provision, Crowe said, meant that startups such as the co-ops would likely be left with more policyholders with unknown health histories, a potential problem in an industry where profitability rests on the ability to accurately weigh risk.

Another problem the co-ops faced was the need to create comprehensive provider networks from scratch. A number of them chose to rent provider networks from competitors, incurring additional costs. But for co-ops, raising premiums is fraught with danger. An HHS report found that price was the deciding factor for two-thirds of those picking policies on health insurance exchanges.

John Holahan, a co-author of the Urban Institute report, put the dilemma facing co-ops this way: “If you don’t price aggressively you’ll get no market share, but if you price too low, you won’t be able to pay back your loan.”

And co-ops have little margin for error. Elizabeth Carpenter, a vice president with Avalere, another policy research firm, said that because of their smallness and regionalism, co-ops that suffer losses in one state can’t turn elsewhere to offset that damage.

Together, the three failed co-ops at one time enrolled about 150,000 people, and borrowed $277 million from the federal government.

The CEO of the Nevada Health Co-op, Pam Egan, told the Las Vegas Review Journal the finances simply didn’t work. Claims were too high, enrollment was too low. (Egan did not return a call from Stateline.)

In Iowa and Nebraska, state officials urged policyholders to switch to different carriers. In Louisiana and Nevada, the co-ops said they planned to honor policies through the end of the year, when open enrollment arrives and policyholders can switch to other companies.

“Members who are forced to find new coverage could be looking at a significantly higher premium and also a different network of providers,” said Chollet, the Mathematica researcher. More broadly, she said, “Less competition is expected to produce higher costs and higher prices. So failure of a co-op is at best a missed opportunity to create or maintain competition.”

Meanwhile, the failing co-ops, their state insurance offices and the federal government are negotiating the outcome of unpaid federal loans. And the co-ops group and HHS are discussing ways to make the requirements less onerous for the remaining co-ops, Crowe said.

Last week, the business-oriented Council for Affordable Health Coverage and the Galen Institute, a conservative research organization, asked Congress to look into the loan program, suggesting that the failures would become a further burden for taxpayers and that the co-ops actually could result in higher premiums. “We are concerned that the CO-OP program has been implemented in ways that make taxpayers liable for far more costs than originally planned or budgeted,” the heads of the two organizations wrote to high-ranking members of several House committees. “We are even more concerned that the CO-OP program has been used to undermine plan competition in states in ways that ultimately drive up health costs.”

Despite the obstacles, some co-ops seem to be competing well with heavyweight commercial companies and even growing.

Chollet of Mathematica points to Community Health Options as an example of how the particular circumstances in a given market can create opportunities for co-ops. Few health insurers were active in the Maine market, which was dominated by Anthem Blue Cross, even though the company’s reputation had suffered over its involvement in a now extinct health plan created for the uninsured in Maine.

“Maine was a place that there wasn’t a lot of competition and I think people were hungry for an alternative and happy to give a co-op a try,” Chollet said.