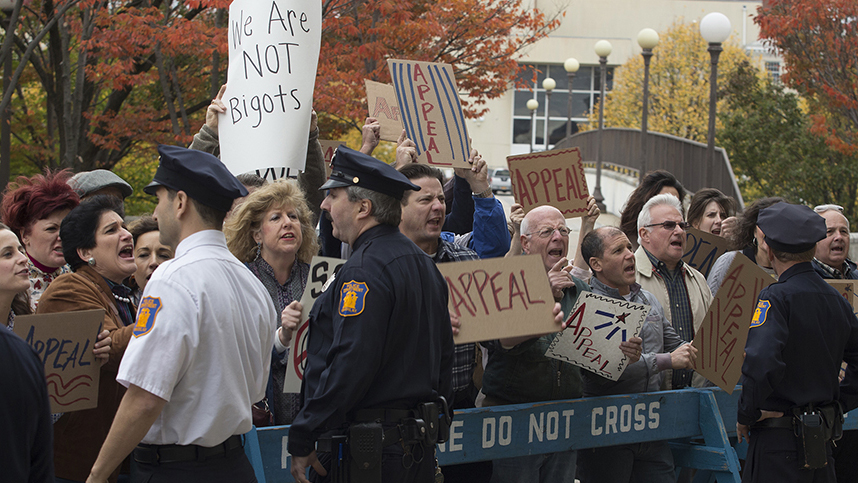 Whites protest in a scene from “Show Me a Hero,” HBO’s dramatization of the Yonkers, New York, battle over desegregation nearly 30 years ago. Many U.S. cities remain deeply segregated. Strict new federal rules require local governments to publicly report segregation in their communities and come up with a plan to combat it.

“Show Me a Hero,” a new HBO miniseries, takes us back to the late ’80s, when the city of Yonkers, New York, was under a federal order to desegregate—or face massive fines. The show tracks the story of the city riven by race. There are riots. There are pipe bombs. There are death threats.

Nearly 30 years later, many U.S. cities remain deeply segregated despite federal and state government efforts, say sociologists who have researched housing patterns. And now, municipalities face more pressure from the federal government to step up their efforts to break down segregation, which, social scientists say, affects African-Americans more than any other racial or ethnic group.

In July, the U.S. Department of Housing and Urban Development (HUD) announced strict new requirements that local governments assess fair housing in their communities, publicly report details of segregation and pockets of poverty, and provide detailed plans on what they are going to do about it. If they fail to comply, local governments risk losing millions of dollars in HUD funding for community development.

“If you look at a black, middle-class neighborhood, it doesn’t have the same level of income, services or quality of education that a white person of the same income would enjoy,” said Massey, co-author of the 1993 book, “American Apartheid: Segregation and the Making of the Underclass.” “And the barriers to entry in more affluent white sectors remain quite high.”

The new rules arrive at a time when some social scientists say segregation has only intensified—even as the country becomes less white. Complicating things, some of the country’s most diverse cities—municipalities with large non-white populations—are among the most segregated.

Chicago, Baltimore, Milwaukee and St. Louis are classic examples of this. And cities with the smallest non-white populations, such as Lincoln, Nebraska, Anchorage, Alaska, and Irvine, California, appear integrated because their very few residents of color are scattered rather than clustered.

Segregation is complex and pervasive. Despite significant gains by middle-class blacks since the 1970s, segregation continues to hurt them in a variety of ways, sociologists say, affecting everything from home values to health to access to quality public schools. Separate does not mean equal.

According to John Logan, a sociology professor at Brown University, the average upper-middle-class black family lives in a much poorer neighborhood than the average working-class white family. White families making less than $40,000 live in wealthier neighborhoods than black and Latino families earning almost twice as much, Logan’s research finds.

Although many African-Americans and Latinos are moving to the suburbs, Logan said these groups are often denied access to largely white neighborhoods, which have not changed much since 1980.

Often, segregation is measured in misleading ways, according to Richard Rothstein of the Economic Policy Institute. For example, if low-income Latinos begin to move into a segregated black neighborhood, common measurements would show the neighborhood as becoming integrated, even though that’s not what most people think of when they think of racial integration.

But diversity doesn’t tell us anything about where different racial and ethnic groups live or how they interact, Rothstein said. “A place is integrated socially if members of different groups interact in meaningful ways—work, socialize, shop, attend church, etc., together.”

The federal Fair Housing Act of 1968 not only outlawed discrimination in the sale and rental markets, but ordered government to “affirmatively further fair housing.”

But from the start, federal enforcement has been lax, housing advocates such as the NAACP Legal Defense Fund allege. Since 1974, HUD has given cities and states $137 billion in grants to fight discrimination, but rarely has withheld funding from localities that violate the law.

And in some instances, HUD itself has been accused of housing discrimination. In 1995, the Legal Defense Fund sued HUD, alleging that the agency had created and perpetuated racial segregation in Baltimore’s public housing. The case was settled in 2012.

Local governments have often flouted or fought fair housing efforts. And civil rights groups have often resorted to suing HUD in an attempt to get it to enforce the law.

Since 2009, for example, officials in Westchester County, New York, have been fighting a mandate to build 750 affordable housing units in its affluent white suburbs—a fight against a mandate that County Executive Robert Astorino calls “social engineering.”

New Jersey courts have recently clarified what municipalities must do to comply with the state’s Fair Housing Act of 1985. The so-called Mount Laurel doctrine, established by the state Supreme Court in 1983, requires all municipalities to provide low-income housing. But until this year’s court rulings, there had been a way to get around that requirement: towns that didn’t want low-income housing could pay other towns to take their share.

The new HUD rules aim to set criteria that must be met by recipients of federal housing grants. What isn’t clear is how the agency will define segregated areas and what metrics it will use to assess a community’s efforts to make progress toward eliminating them.

But the new rules are going to be a costly challenge for many cities. Although the nation's big city mayors support fair housing, some of what will be required will depend on housing in the private sector and beyond their control, said an official who works closely with the mayors. “We’re just going to have to see how difficult this is,” said the official, who didn't want to be identified because he was not authorized to speak publicly.

HUD officials are, however, clear in their intent: Jurisdictions must closely track housing disparities in their communities and identify barriers to integration and resulting barriers to opportunity in education and employment.

A local zoning code that prohibits multi-family apartment buildings in a wealthy neighborhood of single-family homes could be found to stand in the way of integration and would need to be changed or eliminated.

To start, HUD will make available an extensive database of information and maps that detail patterns of integration and segregation in every community. HUD identifies racial and ethnic concentrations in poor areas and disparities in access to opportunities. The idea is to help communities that receive HUD funding to tailor their plans to their unique challenges.