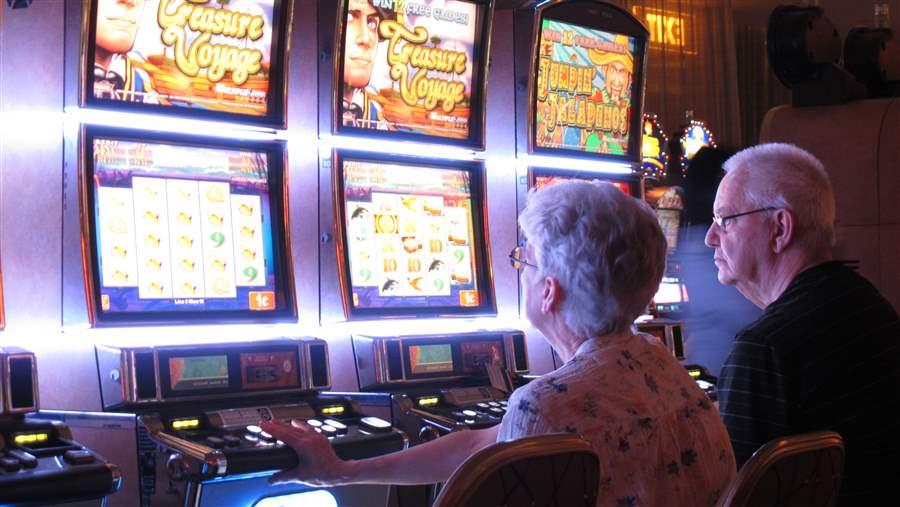 Older gamblers play slot machines in Atlantic City, New Jersey. Younger gamblers are shying away from slots, which poses a revenue problem for casinos and for states.

This story has been updated to correct the spelling of Gregg Giuffria's name.

Casinos across the nation are suffering from a generation gap, especially at the slot machines, as young people seek more exotic electronic games like the ones they can play on smartphones from anywhere.

That’s a problem not just for casino operators, but for the 23 states that rely on revenue from casino taxes, particularly from lucrative slots, to help balance their budgets and fund new priorities.

State revenue from taxing gambling—from casinos, lotteries and racing—has been largely flat since the Great Recession, when adjusted for inflation, according to the Rockefeller Institute, which studies tax revenue.

Casino tax revenue in 16 states studied by the institute increased just 0.1 percent in fiscal 2015 compared to the year before when adjusted for inflation. Of those states, Maryland reported the largest growth, 17.1 percent. But that largely resulted from the opening of a new casino in Baltimore. Excluding Maryland, tax revenue declined 1.2 percent in the remaining 15 states.

That’s prompting the casino industry and the states to scramble for new ways to satisfy a younger generation of casino gamblers to keep their revenue up, including mimicking the types of games millennials play on the Internet, such as online poker and fantasy sports.

“The research shows that most of the casino gamblers are the elderly population,” said Lucy Dadayan, senior policy analyst at the Rockefeller Institute. “The gaming industry is trying hard to attract a younger population.” 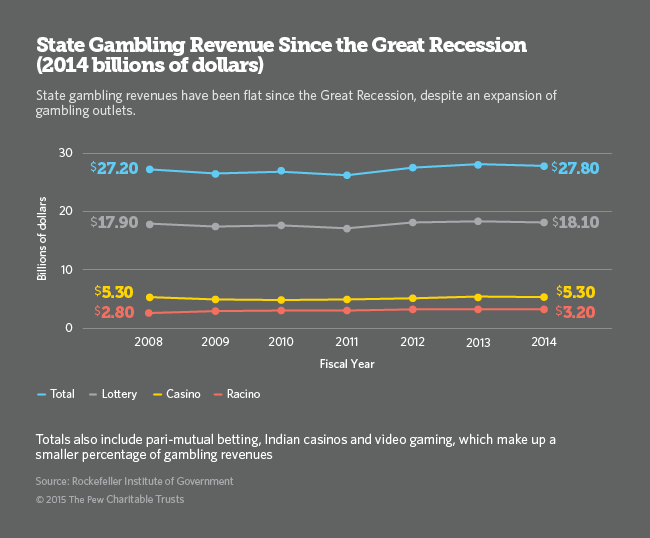 What Do Millennials Want?

Daniel Sahl, associate director of the Center for Gaming Innovation at the University of Nevada at Las Vegas, said it is “well accepted within the industry” that gambling as it exists today is not as attractive to millennials as it is to their parents or grandparents.

Millennials, especially, think of leisure activities as “a social experience that you share with friends,” Sahl said. “Gambling does not resonate with them as particularly fun to do.”

According to polling commissioned by the American Gaming Association (AGA), an industry group, 39 percent of adults under 35 said they had visited a casino in the past year. More than older generations, younger casino-goers patronize crowd-friendlier table games, such as blackjack, which contribute less to casino revenue than slots do. Only 51 percent said slot machines and video poker were their preferred form of gambling compared to 61 percent of all casino-goers.

While seniors play the slots, the “young ones” are not as interested, said Larry Gregory, executive director of the Mississippi Gaming & Hospitality Association, which represents 28 casinos in the state.

Alex Bumazhny, a financial analyst at Fitch Ratings who studies gambling, has found that millennials who go to casinos spend more time and money on food, drink and entertainment than they do on gambling.

That’s why, AGA spokesman Justin Zink said, “More than ever before, casinos are making enormous investment in non-gaming amenities such as clubs, spas, restaurants and shows.”

What makes the younger generation different when it comes to electronic casino games?

“Those games are technology-enabled, require decision-making and you have a chance to win or lose money in the course of a day,” he said. “That is increasingly important with millennials and tends to take away players from casinos, especially on slot floors.”

Companies that produce slot machines and other gambling devices are busily experimenting with ways to combine skill with luck in gambling games that feel more like the hybrid games found on the Internet.

Sahl said his institute is working with companies on inventing games that combine the skills associated with games such as Halo and Clash of Clans (in which players acquire weapons, build bases and compete against other players) with gambling games of chance.

Gregg Giuffria, CEO of G2 Game Design and the former co-owner of the Hard Rock Hotel and Casino in Biloxi, Mississippi, said his firm is well on its way to making new types of games for casinos and plans to roll them out at a gaming convention in the next few weeks.

“I look at it as an opportunity,” Giuffria said. “The concept of pulling the one-armed bandit is gone. The next generation is looking for a different entertainment value.”

He pointed to arcade games where no monetary winnings are involved, but where players still have fun, get better at the games and say, “Let’s go back next weekend.” Melding that kind of skill-based game with a game of chance is the future, he said.

“We have solved the problem of blending these two together,” Giuffria said. “We’re going to demonstrate that you will have the ability to play a game that has never been in existence before—a blend of chance and skill.”

As the gaming industry seeks to roll out the new hybrid games, states are faced with drafting new regulations to govern them. Nevada passed a law earlier this year calling on the state’s Gaming Commission to develop regulations for hybrid games in casinos. New Jersey approved fantasy sports betting in casinos in 2013.

In Mississippi, Gregory of the gaming and hospitality association said, casinos are eyeing changes to the technology associated with casino games, while starting to add more entertainment and activities outside of the traditional casino games.

There’s much at stake for the states. State taxes on net casino receipts (gross receipts minus prizes paid) account for most of the state revenue from casinos. Some states charge an admission fee as well, mostly on riverboat casinos. The revenue helps pay for housing, public education and transportation. The taxes brought in an estimated $8.6 billion in direct gaming taxes to states and localities in 2012, not counting other economic impact, such as employment, connected to casinos, according to the AGA, which cited the most recent year for which numbers are published.

Allen Godfrey, executive director of the Mississippi Gaming Commission, said any trend away from slot machines, which are the most lucrative form of casino gambling, would hurt the state’s revenues from casinos. He said the commission is waiting for the industry to bring examples of the types of hybrid games innovators are talking about before setting any new regulations.

Giuffria, the gaming CEO, said casinos around the country have little choice but to adopt the new games because their revenue will otherwise continue to fall—as will income in states that depend on revenue from taxing them. “If you don’t change, you go out of business,” he said.