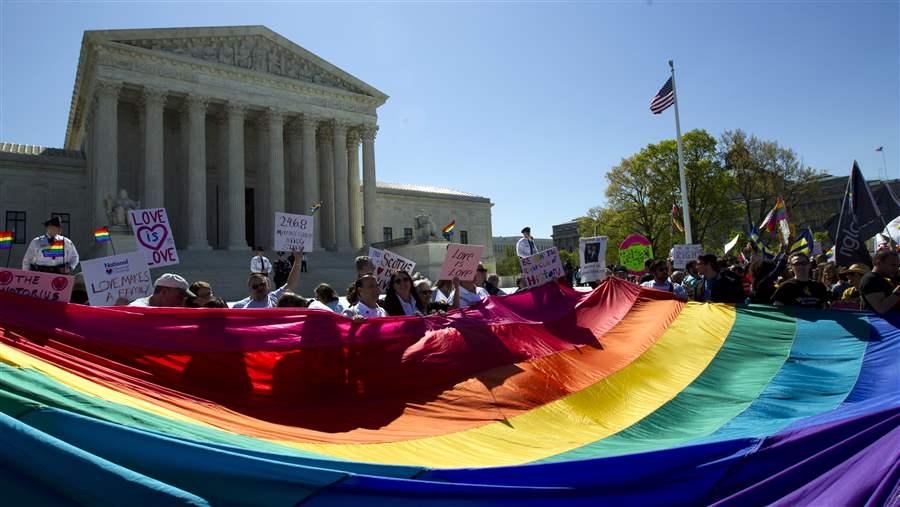 Now that the U.S. Supreme Court has legalized same-sex marriage nationwide, some states that offer health and retirement benefits to their employees’ domestic partners are considering changing those policies, in large part to save money or avoid discrimination lawsuits.

Before the ruling, 34 percent of state and local governments allowed unmarried same-sex couples to receive health care benefits, while 28 percent did so for domestic partners of the opposite sex, according to a study of public sector benefits by the Bureau of Labor Statistics.

Based on what happened in states that legalized gay marriage on their own, those numbers are about to dwindle.

Connecticut and Delaware never offered domestic partner benefits to their workers, but they did allow those in civil unions to add their partners to their health and retirement plans. The two states scrapped those benefits once same-sex couples could marry.

Of the 13 states that prohibited same-sex marriage before the Supreme Court’s June ruling (Arkansas, Georgia, Kentucky, Louisiana, Michigan, Mississippi, Missouri, Nebraska, North Dakota, Ohio, South Dakota, Tennessee and Texas), only Michigan offered anything similar to domestic partner benefits, as employees could add to their plan one adult they were not related to. Matthew Fedorchuk with the Michigan Civil Service Commission, which oversees state benefits, said the fate of those benefits could be hashed out in ongoing labor negotiations.

Government workers are likely to see more changes than those in the private sector.

Elliott said domestic partner benefits may be more vulnerable within state and local government, where competition over employees isn’t as fierce as in the private sector and where leaders have been under pressure to keep finances in check since the recession.

A Question of Fairness

That risk is part of the reason the capital city of Annapolis, Maryland, decided to end its domestic partner benefit program.

“We had added it because the law didn’t treat people equally,” Paul Rensted, former human resources manager for the city, said of the program, created in 2010. Now all city employees must be married to add an adult to their benefits package, and Rensted said couples were given six months’ notice, with four employees ultimately marrying.

“Millennials are waiting longer to get married, but that doesn’t mean they’re not living together—they’re not all living with mom and dad,” said SHRM’s Elliott.

Nancy Polikoff, a family law professor at American University Washington College of Law, said she likes “plus one” policies that allow employees to take care of their families, whether it be a spouse, a partner or an aging relative.

“The purpose of providing benefits is to help employees fund the financial and emotional obligations in their homes, and marriage is not always a part of that,” she said.

She pointed to Salt Lake City’s plan as a model. City employees can add any adult to their plan as long as they live together.

Jodi Langford, who oversees the benefits program for the city, said it has been used to cover parents, siblings and unmarried children older than 26 who would otherwise age out of their parents’ health insurance plans. Of the 60 people on the plan before same-sex marriage was made legal, only about 10 have switched to spousal benefits.

“If we stop, we would have parents, siblings, boyfriends and girlfriends who would be without benefits,” Langford said. While the program is secure for now, she said there’s been some talk about reviewing it within the next year.

In Florida, public universities are planning to review their domestic partner benefits. Because only spouses are eligible for state-funded benefits, state universities had to come up with creative solutions to offer benefits to gay employees’ domestic partners. It was an anonymous gift that covered the additional cost of adding an adult beneficiary to a health plan at Florida State University (FSU) starting in 2014, while the University of North Florida (UNF) began covering the additional cost to employees through its fundraising foundation in 2006.

Spokesmen for both universities said the programs played a role in attracting talent. UNF is winding down its program, which had only been offered to same-sex couples, said Vice President and Chief of Staff Tom Serwatka.

“When we went to this, we did so on the basis that heterosexual couples had a choice whether they wanted to marry and understood the full implication of that choice. Homosexual couples didn’t have that choice.” Now that they do, Serwatka said, it makes less sense for the university to raise private funds to pay for the benefits.

“The university wasn’t trying to change the idea of marriage as the policy for the state, and state funding required marriage,” he said.

FSU is reviewing its program, which only paid for health insurance for domestic partners who could not get insurance through their work, said spokesman Dennis Schnittker.

“The gift was made under the belief of the donor that the state would be funding the benefit in the near future,” he said.

In some states, however, domestic partner benefits are likely to continue.

“We wouldn’t just get rid of it because same-sex marriage has come about,” said Tom Cheney, deputy commissioner for Vermont’s Department of Human Resources. “The state of Vermont has long seen the value in offering domestic partner benefits to couples of all types. It’s a useful recruitment and retention tool for the state as an employer.”

Elliott believes it’s too early to know what most employers—both public and private—will do with domestic partner benefits.

“Once we get past this year into next year’s open enrollment, we’re going to see some real change. The tea leaves haven’t dried yet,” he said.