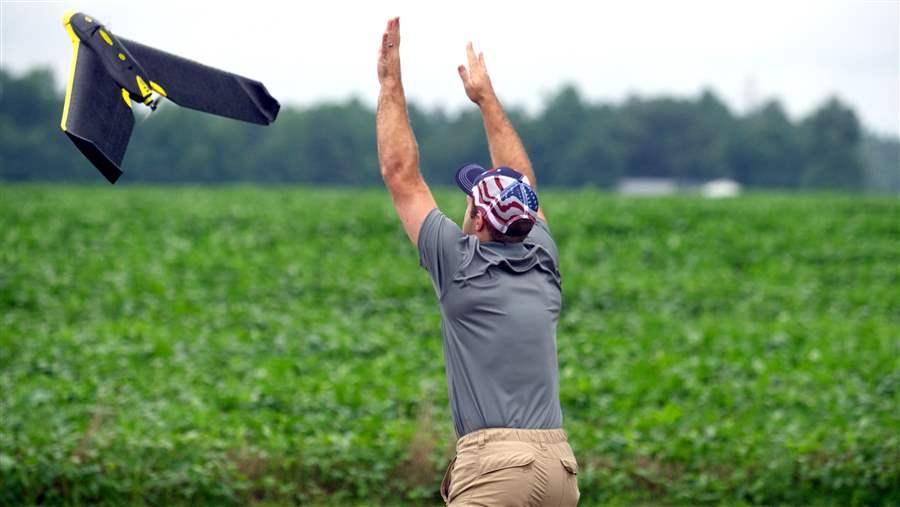 Joshua Olds, director of flight operations for Waypoint Global Strategies, launches a drone during a precision farming demonstration in August in Bruington, Virginia. In the absence of federal drone regulations, states are passing their own laws on when and where drones can fly.

This story has been updated.

In New Hampshire you can’t use a drone to harass a hunter. California lawmakers don’t want you to fly an unmanned aircraft near a forest fire. And in Texas you better not pilot one anywhere near the state capitol.

In the absence of federal regulations, states are eager to pass their own policies on unmanned aerial vehicles (UAVs), mandating everything from where drones can be flown to whether law enforcement can use them to gather evidence. But advocates for the technology, which is growing in popularity both commercially and among hobbyists, say legislatures are overstepping their authority and hamstringing an industry ripe for growth.

According to the Association for Unmanned Vehicle Systems International (AUVSI), an industry-supported group, at least six states—Florida, Minnesota, Nevada, North Dakota, Oregon and Virginia—have passed legislation restricting the commercial use of drones. Another eight have restrictive legislation pending.

More broadly, 45 states considered at least 156 bills relating to drones this year, according to the National Conference of State Legislatures. Nineteen of those states passed legislation targeting the use of commercial drones as well as the use of devices flown privately or by law enforcement; another four adopted resolutions.

In California, however, Democratic Gov. Jerry Brown vetoed a measure Wednesday that would have made flying a drone less than 350 feet above private property without consent a trespassing violation.

Tom McMahon, a spokesman for AUVSI, said the legislation posed a number of challenges for commercial drone operations such as delivery services that need to fly long distances, likely over private property, to serve customers.

Those projections, though, rely on pending Federal Aviation Administration (FAA) regulations to integrate drones into the U.S. airspace, job growth in the industry, the availability of financing and capital for drone purchasers and manufacturers, and other economic conditions.

Laws specifically regulating how drones can be used are largely unnecessary, McMahon said. Existing state-level policies on privacy, trespassing and harassment can be used to address illegal acts committed with drones, he said.

Without more comprehensive laws, companies could expand surveillance techniques, Scott said. For instance, they could use drones to collect personal or location details from cellphones, via license plate scanners or facial recognition software, and provide or sell that information to law enforcement or to other businesses.

“The current laws might address individual use of drones in terms of the malicious activities somebody might do,” Scott said. “But they don’t address the bulk collection of information of people in public.”

It is illegal to fly commercial drones in the United States, though the FAA is developing rules to regulate commercial flights of small UAVs.

There is little agreement on the ultimate scope of such federal regulations. Industry advocates such as McMahon and Michael Drobac, executive director for the Small UAV Coalition, say only the FAA can regulate the nation’s airspace, and they dismiss state efforts to regulate drones as empty attempts to weigh in on a hot topic.

In the meantime, as the FAA works on drone regulations, the agency has granted more than 1,000 exemptions for businesses to use the aircrafts.

But the exempt companies must follow strict rules, McMahon said. The drones can only fly up to 500 feet in altitude and only in daylight. Final FAA rules will, hopefully, expand when and where companies can fly, he said.

Drobac called the California legislation a “diabolically bad bill” and said the law, and others like it, were stifling innovation. “Titillation and hysteria are leading to really bad state laws.”

Scott and EPIC said state laws can be a good first step, but they want the FAA to do more. The FAA has said that privacy issues are beyond its purview, leading EPIC to sue the agency in an attempt to force its officials to address privacy concerns raised by the use of drones. “Companies using drones should be required to inform the public of the information they plan to collect, how that information will be used and the policies regarding retention of the information and the sharing of the information,” Scott said.

While already popular among hobbyists and amateur aerial photographers, drones are being used in a rapidly growing number of industries, Drobac said. In 2014, the FAA estimated as many as 7,500 small commercially operated drones could be in use by 2018, if the necessary regulations are put in place. The devices can be used by realtors to showcase properties, by utility companies to safely inspect cellphone towers and high-voltage power lines, and by farmers to monitor crops.

Legislatures are not the only bodies imposing limits on drone use. Last month, the University of Arkansas banned drone flights over its campus without approval, and the skies will have to be clear during high school football games in Broward County, Florida.

The American Civil Liberties Union has not called for regulation of privately used drones because, according to ACLU attorney Chad Marlow, most privacy concerns can be covered by existing laws.

He said many state proposals—like New Hampshire’s application of existing harassment standards to the use of drones to observe hunters—could hamper public knowledge of illegal activity.

Eager to protect civil liberties, a handful of states are setting rules for how governments and law enforcement can use UAVs for surveillance and evidence collection.

“I wanted it to be fairly encompassing and good model legislation,” he said. “[Something that] addressed civil liberties, but wasn’t technophobic.”

Becker also wanted to forbid law enforcement from arming drones with weapons. But, in passing the legislation, lawmakers stripped some of that language from the bill, effectively making North Dakota the first state to allow police to equip drones with nonlethal weapons like rubber bullets and tear gas.

Nadia Kayyali, an activist with the Electronic Frontier Foundation, a nonprofit focused on civil liberties and technology, said the potential for law enforcement to use weaponized drones is concerning and many proposed limits don’t do enough to protect people from unwarranted surveillance.

“It definitely feels like states are doing this piecemeal and they’re not doing very much,” Kayyali said.

An ideal privacy law, the nonprofit says, would require at a minimum that police obtain a warrant in order to use a drone, that commercial use of drones be subject to privacy protection and reporting requirements, and that standards for media and private drone use be created that balance privacy and the First Amendment.

“When it comes to innovation,” Kayyali said, “we don’t want to stifle that.”