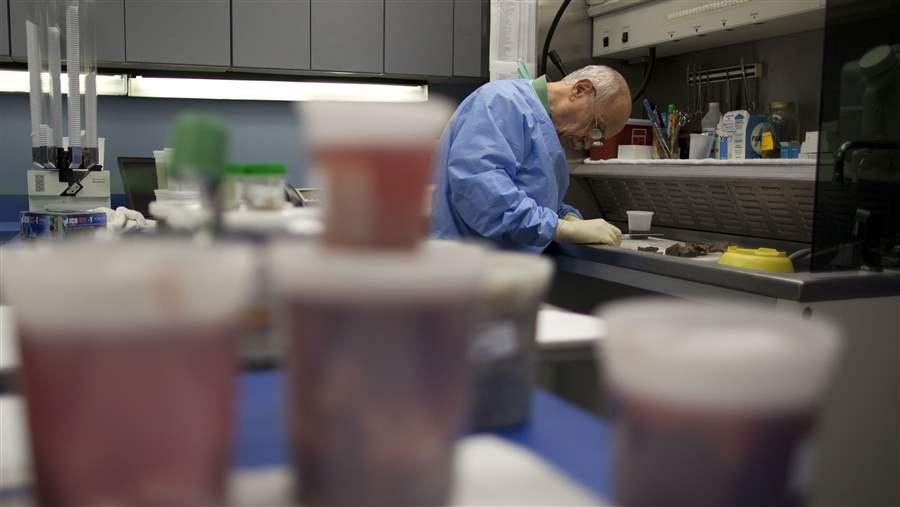 A medical examiner in Las Vegas prepares tissue samples from a corpse for viewing under a microscope to help determine cause of death. States are taking steps to improve the quality of information supplied on death certificates.

Robert Anderson may know more about death than anybody else in the United States.

Anderson is chief of mortality statistics for the Centers for Disease Control and Prevention. Information about death flows into his suburban Maryland office from all over the country, detailing not only how many Americans have died—2,596,993 in 2013—but the causes of those deaths. Researchers use the information to learn what kills Americans, and public officials use it to craft policies to improve health and safety.

Unfortunately, many death certificates are incomplete or inaccurate. When multiplied across thousands and thousands of cases, such gaps can translate into a faulty understanding of mortality in the United States, and affect how money is spent on research and prevention.

“You might be developing programs that aren’t addressing the real problem, in which case you are wasting money instead of really targeting it where it needs to go,” said Anderson.

Unlike most countries, the U.S. does not have a centralized office of vital statistics. Instead, all 50 states plus the District of Columbia and New York City, as well as five U.S. territories, have their own offices, which collect information on births and deaths and send it to Anderson’s office.

But with some prodding from the CDC, states have taken steps to improve the accuracy and timeliness of the death certificates, mainly through the adoption of electronic systems.

A study published last year in the Journal of Studies on Alcohol and Drugs found that death certificates related to motor vehicle accidents often failed to mention the involvement of alcohol. From 1999 to 2009, death certificates reported that alcohol was involved in 3.3 percent of traffic deaths. In contrast, the federal Fatality Analysis of Reporting System, which collects information on car accidents, reported alcohol involvement in more than 20 percent of fatal accidents.

Similar studies have pointed to the underreporting of conditions such as dementia and diabetes. Medical researchers and statisticians say people who complete death certificates often leave out some details because they want to spare relatives from distressing information. They also attribute deficiencies in death certificates to the absence of autopsies in the vast majority of cases, and to insufficient training of those who fill them out.

Filling Out the Forms

Death certificates themselves are largely standardized across the country, but the person responsible for filling out the certificate varies from state to state and even jurisdiction to jurisdiction.

The apparent cause of death is the main determinant of who will fill a death certificate. In cases of non-natural deaths, including homicides, suicides and accidents, as well as infant deaths and deaths from undetermined causes, it is generally up to a medical examiner or coroner to fill out the death certificate.

For people who die a “natural” or illness-related death (the vast majority), the last medical provider attending the deceased—usually a physician, a physician’s assistant or a nurse—fills out the death certificate. But most physicians aren’t trained how to fill out the certificates correctly and comprehensively, Anderson said.

It doesn’t help that in most cases, they must fill them out without the benefit of an autopsy, which is the most definitive method of determining the cause of death, but costs several thousand dollars.

As a result, many death certificates do not supply the level of specificity that would help medical researchers in their investigations into the prevalence and causes of deaths.

Complete and correct statistics on death are essential for understanding fatal diseases and injuries, said Marcus Nashelsky, president of the National Association of Medical Examiners and a professor of pathology at the University of Iowa. “Research using local, regional, state or national death statistics is a vital component of public health activities—ranging from education and prevention strategies for heart disease, diabetes, infectious diseases, injuries, and so on.”

Anderson, who trains hospital workers to fill out death certificates, said medical residency programs should provide such training and doctors should be required to take online courses in death certificates as part of their continuing education requirements, although it is up to medical licensing boards in each state to establish such requirements.

Several states are trying to improve the quality of reporting on death certificates, most notably through state-run electronic systems. According to the National Association for Public Health Statistics and Information Systems, a nonprofit representing state vital records and public health statistics offices, 35 states plus the District of Columbia and New York City have searchable, electronic death certificate databases.

In states with an electronic system, a funeral director typically begins the death certificate process by providing identifying information about the deceased. After that, the system alerts the medical provider who last saw the patient to fill in the cause and manner of death.

Melissa Bird, chief of the Iowa Bureau of Health Statistics, said the electronic system enables her office to track pending certificates and to hurry along or provide assistance to medical providers who are lagging. Since Iowa’s system was introduced in 2014, she said, the average time it takes to complete a death certificate has been cut from more than two weeks to six days.

A speeded-up process helps survivors too, since they often need death certificates to gain access to financial accounts, safe deposit boxes, insurance proceeds and more. In some states, a death certificate is needed before burial or cremation.

Iowa and New York City are the only jurisdictions that require all practitioners to use the electronic death certificate system. Some other jurisdictions have such requirements only for medical examiners, coroners and medical providers who filled out more than a certain number of them in the previous year. (In Alabama, for example, the number is 10.)

A number of the state electronic systems, including Alabama’s, have digital prompts that ask medical providers for more specific information. “So if they put down just ‘cardiac arrest,’ the prompt says that we need to know more than that,” said Catherine Molchan Donald, the registrar of the Alabama Center for Health Statistics. “Was it due to a motor vehicle accident, coronary artery disease? Our messages ask them to be more specific.”

Anderson’s shop at the CDC is putting the finishing touches on a new online service that will walk providers through the process of filling out death certificates electronically. The CDC is also providing grants in some pilot states to make their electronic systems compatible with the federal service. Anderson says it will be several years before the service is fully operational.

Some states have found that the electronic system itself isn’t enough. Jeff Duncan, senior health information specialist in the Utah Department of Health, said that many medical providers who fill out death certificates occasionally have trouble remembering how to log in to the electronic system or how to navigate it.

In 2011, with a grant from the CDC, Duncan’s department along with Intermountain Healthcare, an insurer with about half of the Utah market, embedded a death certificate as part of every patient’s electronic medical record. Now providers can gain access to the death certificate through an electronic system they already use every day. Even better, all the patient’s medical records are in the same place, which is useful in filling out the certificates.

A study found that the new Utah system reduced the time it took to complete certificates and provided more information. Utah officials are now trying to find funding to expand the program to the whole state, according to Duncan.