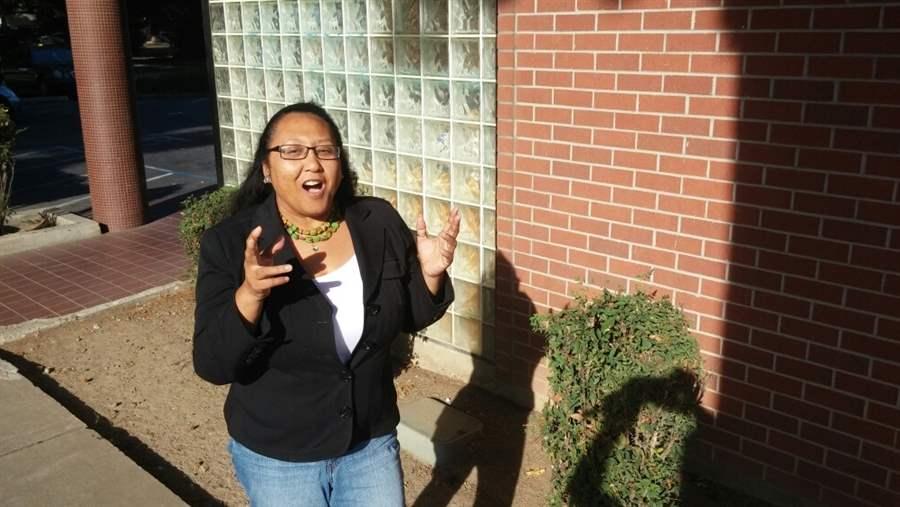 Tina Marshall was laid off from her job in North Carolina in 2014. Since then, she says, she’s had a hard time finding work because of her age. Nearly all states have age discrimination laws, but they may have unintended effects. (Courtesy of Tina Marshall)

When Tina Marshall got laid off in 2014, she was confident that she’d quickly find work again. A few years earlier, she’d gone back to school to get her bachelor’s degree, so she had a recent graduation date on her resume and solid experience in her second career in manufacturing sales and operations.

And sure enough, the Charlotte, North Carolina, woman had no troubling landing job interviews. Her phone interviews always went well, she said, with recruiters all but promising her a job. Until, that is, she showed up for a face-to-face interview, and it became clear the hiring manager was expecting someone else—someone much younger. Marshall is 60 and, thanks to a knee injury, she walks with a pronounced limp.

Like the U.S. population overall, the American workforce is aging. According to a 2014 report by the U.S. Census Bureau, the labor force participation rate for people older than 65 reached 22.1 percent for men and 13.8 percent for women at the end of the first decade of the 21st century, compared to 17.7 percent and 9.4 percent, respectively, in 2000. Many of these workers say they have experienced or seen age discrimination in the workplace: In three surveys of older workers conducted by AARP since 2002, roughly two-thirds of respondents reported such discrimination.

All states, with the exception of Arkansas and South Dakota, have laws barring age discrimination, according to the National Conference of State Legislatures. Many of these laws mirror the federal Age Discrimination in Employment Act of 1967. In some states, such as California, Michigan and Minnesota, the prohibition against age discrimination is included in a broader law barring discrimination based on race, religion or sex.

But some economists and legal experts say that while these laws protect older workers from being fired, they offer little protection from hiring discrimination, which is more difficult to prove.

In fact, there is some evidence older workers are less likely to be hired in states with strong age discrimination laws, according to Joanna Lahey, an associate professor of economics at Texas A&M University who has investigated the phenomenon. “Employers just don’t want to mess with them,” Lahey said. They’ll keep the older workers they have on staff for a little longer, but won’t take anyone else on.”

The trends have prompted a handful of states to consider how to help older people who want to keep working.

In Minnesota, the state Department of Employment and Economic Development helps older adults prepare for the modern workforce with on-the-job training through paid community service assignments. Other states have similar programs, most supported by federal grants. Meanwhile in New York, a pending proposal would create a task force to assist older adults who want to continue working or re-enter the workforce after retirement.

Between the 1960s and the 1980s, many Americans retired relatively early, a phenomenon made possible by Social Security and the introduction of Medicare. But that began to change in the 1990s for men and in the 2000s for women. One major reason was that many employers replaced traditional pensions with 401(k) plans and other retirement savings plans, giving people an incentive to work longer. The Great Recession exacerbated the trend, because many older workers delayed retirement to replenish their decimated 401(k) plans.

Monique Morrissey, an economist with the Economic Policy Institute, also pointed out that people are living longer, and that most U.S. jobs no longer require heavy physical labor. But she also noted that people who are able to work into their 60s and beyond tend to be college-educated, with more options professionally, such as consulting or entrepreneurship.

According to the U.S. Equal Employment Opportunity Commission, charges of age discrimination have risen steadily since the turn of the century, from about 16,000 in 2000 to close to 21,000 in 2014. The numbers spiked to a high of nearly 25,000 in 2008, in the depths of the recession.

But Laurie McCann, a senior attorney with the AARP, said “the number of charges filed with the EEOC is just the tip of the iceberg.” Most employers, according to McCann, “are smart enough not to make any sort of comment against the person’s age, which would provide the smoking gun piece of evidence. So often, it’s really not worth filing a job discrimination claim.”

Furthermore, U.S. Supreme Court rulings since 2000 have made it more difficult for workers to win age discrimination cases. In 2000, the high court ruled that older workers may not sue state agencies for monetary damages in age discrimination cases. And in 2009, the court ruled that workers bear the full burden of proving that age was the deciding factor in their dismissal or demotion. Previously, an employer had to prove that it had a legitimate reason for its action apart from age.

Employers who are reluctant to hire older workers may perceive that they lack up-to-date skills, will demand too high a salary or will be too expensive to insure, among other reasons.

“There are certain industries like technology and journalism that have a reputation for being resistant to hiring older workers, where they maintain a culture that favors youth,” said Paula Brantner, executive director of Workplace Fairness, a nonprofit that provides free information on employment rights and workplace issues.

“Unless the older person knows who was hired and can compare their qualifications, then all they have is a hunch and a gut feeling.” McCann said.

Marshall has “gotten paranoid,” she says. “That my resume has been singled out and stamped as ‘OLD’ and I will never get another chance at anything again.” But she never considered filing an age discrimination claim against her would-be employers.

“It’s too hard to prove,” she said. “It always seems that companies leave just enough older people in place to at least make it appear they are not being discriminating.”

Once she sells her house, and downsizes to a much smaller home, Marshall plans to wipe out her remaining debts and look for a part-time job. Now that she’s on Medicaid, she said, she hopes to be a more attractive prospect to employers.

“Rumor has it that lots of companies will pay ‘over 50s’ good pay for experience—as long as they are not full-time and eligible for health insurance.”