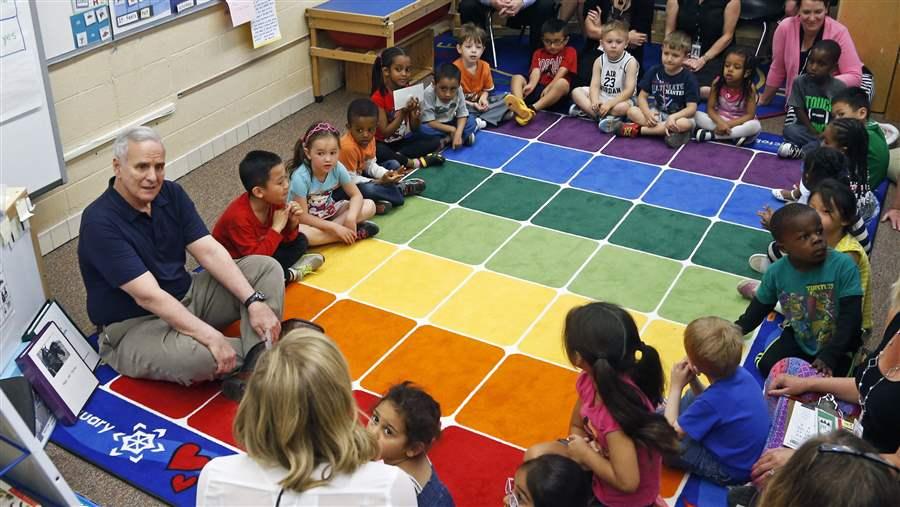 Democratic Gov. Mark Dayton visits a preschool class at an elementary school in Apple Valley during his push to convince the Minnesota Legislature to provide preschool for all students. Many states are embracing early education, but are supporting it in different ways. (AP)

Kari Leonard is a mom of five, but on a typical weekday a visitor might find 10 young children in the living room of her Saint Peter, Minnesota, home. The children at her child care center, who are mostly preschool age, might be playing with blocks, or doing a craft project, or listening to a song as Leonard plays it in a foreign language.

Her business could benefit from the state’s recent decision to spend $104 million over the next two years on early learning scholarships for low-income children. Because her program is highly rated by Parent Aware, a nonprofit that evaluates early education programs, she can enroll scholarship recipients.

Policymakers in Minnesota, like many across the country, have been impressed by studies that show early education can improve a child’s life and save taxpayers money over the long term. But while there’s a growing consensus on the value of preschool, states disagree on where the programs should be based, who should run them, or how the government should support them.

In Minnesota, Democratic Gov. Mark Dayton initially proposed that public schools provide all-day, voluntary pre-kindergarten for every 4-year-old in the state. He wanted to create a program similar to Oklahoma’s, where 99 percent of public school districts offer pre-K classes.

But after months of debate, legislators rejected Dayton’s plan in favor of increasing funds for the state’s scholarship program. Eligible families can receive money to spend on any highly rated early learning program for 3- and 4-year-olds they choose, whether it’s offered by a local public school or a home-based provider, like Leonard.

Like Texas’s pre-K program, the scholarships target disadvantaged children. But like Florida’s, they rely on parent choice.

“We had quite a debate this year about universal access to pre-K for 4-year-olds, and scholarships, and whether one or the other is the best path forward,” said Democratic Rep. Erin Murphy, deputy minority leader in the Minnesota House. “Like other states, I think we’re wrestling with this.”

States spent $6.3 billion on pre-K last fiscal year, according to the Education Commission of the States (ECS), an organization that tracks state policy trends. “More and more states are investing in pre-K,” said Bruce Atchinson, head of the Early Learning Institute at ECS.

State investment grew 8.3 percent last year and 6.9 percent the year before, according to ECS. Forty-four states and the District of Columbia now fund pre-K programs for 4-year-olds. Many states also fund programs for 3-year-olds.

The National Institute for Early Education Research (NIEER) at Rutgers University surveys state administrators every year to find out whether states have a preschool program and how much they spend per child.

States have structured their pre-K programs in a variety of ways. Since 1998, all Oklahoma 4-year-olds in the state have been able to attend classes at local public schools or programs supervised by school districts.

“Pre-K here is treated like any other grade,” said Kayla Hindman, Oklahoma’s director of early childhood and family education. It’s part of the public school funding formula, although students aren’t required to enroll.

Texas focuses on disadvantaged children. The state funds a half-day of public school instruction for children (mostly 4-year-olds) who come from low-income families, are learning to speak English, or fall into certain other categories. In 2013-14, the state spent $3,479 per child, according to NIEER. Some school districts use local funding or charge tuition to extend the program day or serve more children.

“There is not a will, at this particular time, to have universal, full-day pre-K programs,” said Texas state Rep. Dan Huberty, a Republican. Instead, the state in May allocated $130 million in grants to reward high-performing programs and help them improve further.

“We’re going to look at it and say, how effective is what we’re doing, is it working, and what can we do to make the program better, and then we can make some decisions as we move forward,” said Huberty, who authored the bill, which also allows districts to partner with local private programs to offer pre-K services.

Florida’s universal pre-K model relies almost entirely on private providers. The state gives families vouchers that subsidize a half-day of instruction at whatever program they choose, so long as the program meets certain licensing or accreditation requirements. Since 2012, Florida has also allowed parents of 4-year-olds with disabilities to use the money to pay for services like speech or behavior therapy.

Florida spent $2,238 per child enrolled in 2013-14, according to NIEER. Families that want to enroll in a full-day program may be eligible for other funding, like child care benefits, or they may pay tuition to make up the difference.

Florida kindergarteners take a readiness assessment during the first few weeks of school. At least 70 percent of children served by a particular state-funded pre-K provider must pass both parts of the assessment, or the state can put the provider on probation. Florida recently began assessing children when they enter and leave pre-K programs, as well.

Figuring out whether state preschool programs are high-quality is hard to do, says Steve Barnett, director of NIEER. Every year, NIEER ranks programs according to characteristics that are key to quality, like adequate funding and small class sizes, but the data are often incomplete. State spending per child may not reflect all the money flowing into a given program, for example.

A long-running school funding lawsuit pushed New Jersey to create what early education experts say is a particularly high-quality preschool program. “New Jersey is probably the closest thing we have to a replication at scale of Perry Preschool,” said Barnett; a famous study of that 1960s-era preschool program revealed the lifelong benefits of early childhood education.

New Jersey’s program, formerly known as the Abbott Preschool Program, offers small, full-day classes, taught by highly trained, well-paid teachers, to both 3- and 4-year-olds. It’s an expensive program, costing the state $13,337 per child by NIEER’s calculation. The New Jersey Supreme Court has pushed the state to maintain funding at a high level.

University of Minnesota economist Art Rolnick helped design the Early Learning Scholarships Program, which began as a pilot program funded by local business leaders in 2008. He believes the scholarship model will deliver the greatest return on public investment. “The first dollar should go to the most vulnerable kids,” he said. This school year the scholarships will reach about 12 percent of eligible Minnesota children.

Although Gov. Dayton supports the scholarships, he wanted to create a program open to all children. In January he proposed spending $109 million over two years so public schools could offer full-day, voluntary pre-K to 31,000 Minnesota 4-year-olds. After learning the state was running an almost $2 billion budget surplus, he proposed spending $343 million to establish a truly universal program.

Dayton’s proposal split the Legislature into two camps: those who supported universal preschool, and those who wanted to expand early learning scholarships. Dayton argued that pre-K benefits all children, and it was the right time to make a major investment.

“This is a year to establish those priorities and we have the resources to be able to fund this huge step forward for the future of our state,” the Star Tribune reported him as saying. “If we don’t take it now, I don’t know when the opportunity will present itself again.”

The debate was fundamentally driven by values: Some favored a market-based approach, and some wanted to rely on public schools to ensure universal access.

“There was a similar discussion that started probably a decade ago about the value of school for early learners, and about our capacity in terms of space to manage all-day kindergarten,” Murphy said. Minnesota passed a law in 2013 requiring school districts to offer voluntary, all-day kindergarten classes. Last year, the first year of the program, 99.6 percent of 5-year-olds in the state enrolled.