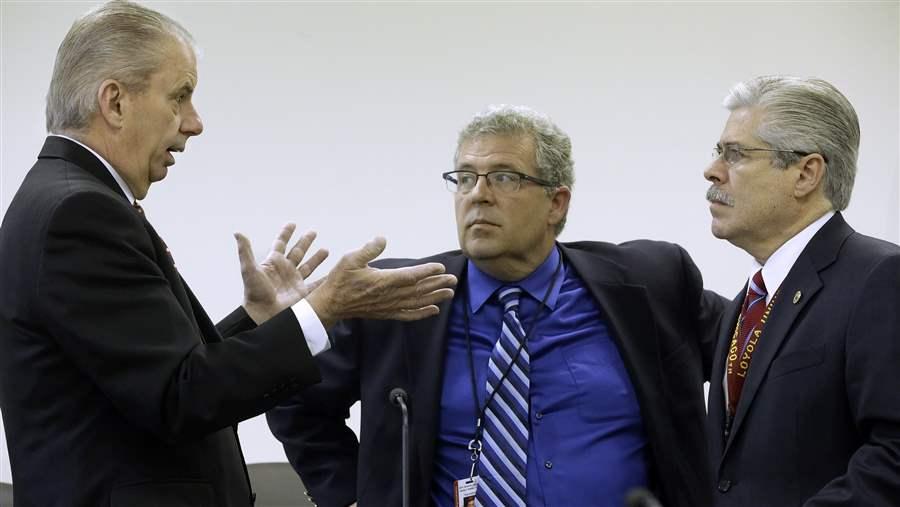 Illinois Auditor General William Holland, left, talks with Illinois Democratic Reps. Frank Mautino, center, and Fred Crespo, right, at the state Capitol last year, when a legislative audit commission was investigating a troubled anti-violence program. Holland, who is retiring in December, issued a stinging audit of that program and many others during his 23-year tenure. (AP)

Illinois Auditor General William G. Holland is retiring in December after 23 years on the job. He has been a fixture in Illinois government, praised by legislators from both parties for his neutrality and professionalism. Over the years, he has issued some blistering audits of state programs, including a $54 million anti-violence initiative launched by former Democratic Gov. Pat Quinn, a health insurance program for children and a prepaid tuition savings fund.

He also delivered a stinging audit of the state’s purchasing agency during former Democratic Gov. Rod Blagojevich’s tenure, exposing waste and mismanagement. [In 2009, Blagojevich was impeached and removed from office for abuse of power. He later was convicted on federal corruption charges.]

Holland started his career as an intern working for Illinois House Democrats and later held a number of legislative positions, including chief of staff to the then-Senate president, a Democrat. The General Assembly reappointed him to the nonpartisan auditor general’s position for an unprecedented three 10-year terms, but Holland said he is retiring before the end of his current term to spend time with his three children and six grandchildren, who live out of state.

Holland, 63, served this year as president of the National Association of State Auditors, Comptrollers and Treasurers (NASACT). Stateline spoke to him recently at NASACT’s annual conference in Chicago about the role of state auditors, the challenges they face and whether it’s hard for them to remain independent.

Government gets bashed a lot for wasting tax dollars. What’s the role of auditors general?

We’re absolutely watchdogs. We do independent evaluation and oversight of state government. Our responsibility is to account for government spending. And we go beyond that to ensure that when that money is spent, it’s in compliance with state and federal laws. Those are the reports that gather the interest of policymakers and legislators because that’s where you see the weaknesses.

How political does it get for auditors general, and how tough is it for you—and your NASACT colleagues—to remain independent?

We have a mix of elected and appointed auditors. Some are appointed by the legislature; some by a small commission. Some are Democrats. Some are Republicans. Some are nonpartisan. In my state, the auditor general is nonpartisan and must be appointed by a three-fifths vote of both the House and Senate. That means the person needs the support of the majority and minority parties. [The Illinois Legislature is controlled by Democrats, but Republicans make up one-third of the Senate and nearly 40 percent of the House.]

Auditors come from different backgrounds, but I find that they all embrace that concept of independence. Independence is the most important thing we talk about. It allows us to push the politics back and keep it out.

But we live in a political world. My biggest job is to let my auditors do the work and insulate them from the political problems. People who work for me are the most nonpolitical people—and that’s how it should be.

Back in 2005, your office came out with an explosive audit of the state’s purchasing agency under former Gov. Blagojevich’s administration. The audit found that the agency shelled out more than half a million tax dollars to contractors for questionable expenses. Some of it was used to pay for their wining and dining and for parking at a Chicago Bulls game. You got a lot of heat for that audit, right?

When we released that audit in 2005, the public was in a love affair with Blagojevich. I think we were the first people who cast some doubt about the quality of the administration. We saw that what was being executed was not described in their press releases. His administration went to great pains to discredit the audit. They selectively leaked portions of it before it was released and claimed they had solved the problems.

The day I released the audit, I had a press conference, and I had never had done that before. I said: Here’s what our findings are. I answered every question. I documented it. Days later, the Blagojevich administration did a flip and accepted all the findings.

Auditors general typically uncover lots of problems with state agencies and programs. Sometimes, these problems have been exposed in previous audits and haven’t been corrected. How do you and your colleagues react to that?

What are some of the major challenges ahead for auditors, comptrollers and treasurers?

I think as we go forward, one of the big challenges is going to be recruiting, hiring and retaining good, qualified staff people. Government is very complex. These are highly technical jobs. You need to hire competent people, whether right out of college or recruiting from the private sector, which is very hard because they pay a lot more. That’s a significant challenge for auditors, comptrollers and treasurers.

Another big challenge for them every single day is cybersecurity. And that’s going to grow even more in the future. They’ve got to be vigilant. They can’t take steps today and say, that’s it. They have to stay on it all the time.

Now that you’re retiring in a few months, what’s your advice to them?

We have difficult jobs and there’s a lot going on. It’s important for us to remember that we can deal with these things professionally—and with a sense of humor. We cannot be too full of ourselves.