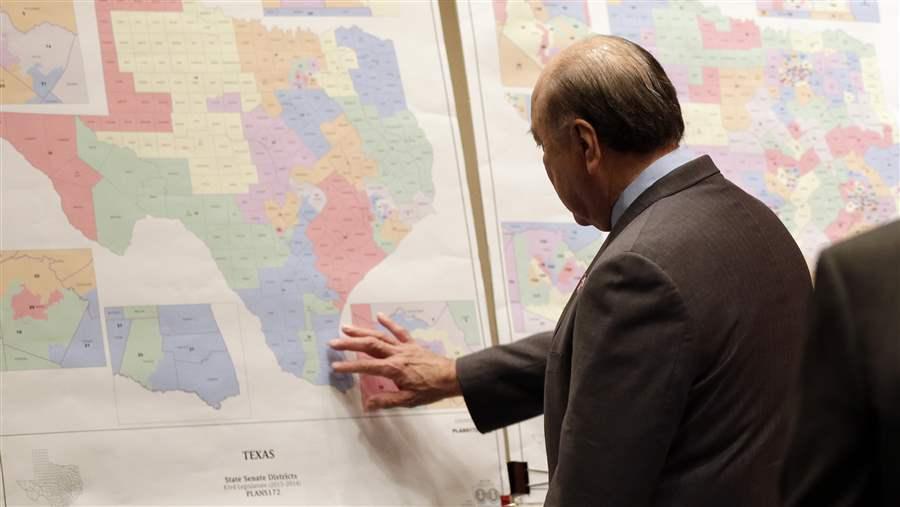 A Texas legislator looks at maps prior to a redistricting hearing in Austin. A handful of lawsuits working their way through the courts could alter what lawmakers may consider when drawing boundaries—and what courts can consider when the maps are challenged. (AP)

The drawing of legislative districts is supposed to be a once-a-decade process, completed shortly after the U.S. Census Bureau provides updated population numbers. But in some states, the map-drawing based on the 2010 count—the most litigious in recent memory—is still dragging on.

Courts will likely draw maps for Florida and Virginia after legislators in those states failed to agree on new maps to replace earlier ones thrown out by judges. Alabama may need to redraw its district lines after the Legislative Black Caucus went to court arguing that Republican state legislators drew them to reduce the voice of minority voters. Democrats in Wisconsin are arguing that GOP lawmakers did the same to their voters. And a case in Texas could change the “one man, one vote” standard.

Though in some states commissions are responsible for drawing U.S. congressional and state legislative maps, in most it is up to state legislators to do the job.

“There are more cases at this time, post-2010 redistricting, than there have been in quite some time, certainly more than there were a decade or 20 years ago,” said Jeffrey Wice, a redistricting attorney who has advised a number of states and caucuses, primarily Democratic, on how to draw their borders.

There are several reasons for the increasing discord, according to Wice. One is that Republicans now dominate statehouses to an extent not seen since the 1920s, emboldening them to draw maps that go further in favoring their party.

Technology is another factor: New mapmaking software allows legislators to slice and dice populations more finely than ever before. At the same time, lawyers and judges can look at what was said in email exchanges to challenge lawmakers’ intent when they drew such maps.

Drawing legislative districts to give an edge to one party, commonly called “gerrymandering,” has been going on in the U.S. for at least two centuries, and most states still don’t explicitly prohibit it. (The term “gerrymander” comes from the name of a 19th century Massachusetts governor, Elbridge Gerry, who signed into law an unpopular redistricting plan that included one state Senate district shaped like a salamander.)

But some studies show it is a growing problem.

In Wisconsin’s 2012 elections, Democrats won 53 percent of the statewide popular vote, yet Republicans got 61 percent of the state legislative seats. That prompted a group of Democrats to sue the state, arguing they were the targets of political discrimination at the hands of Republican lawmakers. The plaintiffs cite one study that reviewed nearly all the redistricting plans since the 1970s and found Wisconsin’s to be one of the most gerrymandered.

A three-judge panel in Wisconsin will hear the redistricting case in the fall. If the panel rules against the plaintiffs, they are expected to appeal to the U.S. Supreme Court. But convincing the high court to throw out the Wisconsin plan by arguing that it discriminates against Democrats won’t be easy.

In 2004, the court scrapped its previous gerrymandering standard—whether plans “consistently degrade a voter’s or a group of voters' influence on the political process as a whole”—without replacing it with anything else. As a result, though the court has rejected some gerrymandered plans, it hasn’t been able to come up with clear standards for what constitutes unlawful gerrymandering.

According to the National Conference of State Legislatures, courts often decide gerrymandering cases by determining “how much is too much,” and, more specifically, whether the plan is so discriminatory it violates the 14th Amendment’s Equal Protection Clause. The Voting Rights Act of 1965 prohibits drawing boundaries that weaken the voices of minorities, but it doesn’t offer protections to people based on their political beliefs.

Nicholas Stephanopoulos, a professor at the University of Chicago Law School who is helping represent the plaintiffs in the Wisconsin case, said redistricting plans in the 1970s didn’t give much advantage to either party. But Stephanopoulos said gerrymandering has increased by the decade, with Democrats getting a modest benefit in the 1980s and with plans becoming more favorable to Republicans from the 1990s through today.

Stephanopoulos ranked almost all maps since the 1970s based on their “efficiency gap,” a score that is based in part on the number of votes “wasted” by the winning party—votes received beyond the 50 percent needed to win each district. He said the calculations show how much more efficiently one party's votes convert into seats over the other party's. Of the more than 800 maps reviewed, Wisconsin’s plan ranked 28th, making it one of the most gerrymandered plans in modern history.

Stephanopoulos hopes his data will show just how much “packing and cracking’” happened in Wisconsin, referring to the process of packing the opposing party’s voters into a small number of districts and cracking their support by spreading the remaining voters over many districts. He said such statistics could push the U.S. Supreme Court to embrace standards for determining when unconstitutional gerrymandering has occurred.

Michael Li, redistricting counsel at the Brennan Center for Justice at New York University School of Law, said setting gerrymandering standards may not just help protect the rights of people in the minority party, but also racial minorities seeking protection under the Voting Rights Act.

But the situation in Florida illustrates the difficulty of preventing gerrymandering, especially when legislators are drawing the lines. In 2010, voters approved a ballot measure, sponsored by the League of Women Voters of Florida (LWVF) and other organizations, amending the state constitution to outlaw gerrymandering. The amendment says that districts may not be drawn with partisan intent or with the intent of supporting an incumbent, and they must also be contiguous and follow natural boundaries.

However, setting tougher rules did not stop gerrymandering, and the LWVF sued over the state House and Senate maps as well as the congressional map. The House map was upheld by the state Supreme Court, but litigation over the other two maps continues.

“The Senate took it upon themselves to talk with our lawyers, and the result was they confessed the maps were drawn unconstitutionally and with partisan intent,” leading to a recent special session to redraw the lines, said Pamela Goodman, president of LWVF.

Meanwhile, Democratic U.S. Rep. Corinne Brown has argued that redrawing her Florida congressional district, which has a large African-American population, in the manner proposed by the state Supreme Court could violate the Voting Rights Act by diluting the voting power of minority populations.

Rather than have Brown’s district snake down from Jacksonville to scoop up Gainesville and part of Orlando, the state Supreme Court suggested the map should extend east to west, toward Tallahassee.

While a new map could open the potential for more minority representation in Orlando, the case illustrates the complicated role race plays in redistricting.

In Alabama, the Legislative Black Caucus filed a lawsuit alleging the Legislature made minority districts too concentrated, making it harder for African-Americans to vote alongside like-minded white voters and diluting their power in the process, according to the Montgomery Advertiser.

Alabama’s case is now back in the state’s U.S. District Court after it was remanded by the U.S. Supreme Court. The high court said the lower court should look at the claims on a district-by-district basis, rather than using a statewide standard for determining whether minorities had enough power within districts.

“The African-American community is split on this. You don’t necessarily need a supermajority black district anymore to elect their preferred candidate,” Li, with the Brennen Center, said.

Race is also a factor in Texas, where a case heading to the U.S. Supreme Court questions whether the state should base redistricting on the total population of a district, as it currently does, or on the voting population—a move that could affect Hispanics.

While districts are required to be relatively equal in population, levels of noncitizens, children and felons effect how many eligible voters are in a district. These populations tend to concentrate in districts that are more urban and liberal.

The plaintiffs in the case, two Texas voters represented by the Project on Fair Representation, a group that challenges government distinctions and preferences based on race or ethnicity, argue their rural district is overpopulated with voters compared with districts that contain many ineligible voters, making their votes less powerful.

But observers worry a change to the “one man, one vote” standard could boost rural districts’ power at the expense of immigrant and other populations.

“This could have serious consequences for communities with large youth and immigrant populations, which are usually found in urban areas. This could be particularly detrimental for Hispanics who tend to have larger families and who may not be citizens,” said Wice, the redistricting attorney.

Wice said going from “one person, one vote” to “one voter, one vote” would be logistically difficult as well, because the census does not ask whether a person is a citizen.