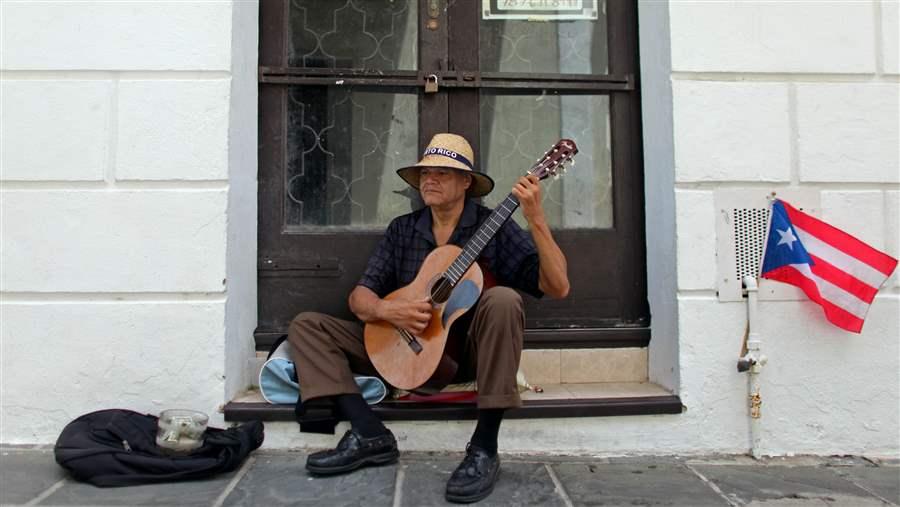 A man plays his guitar while begging for money in front of a closed down business in Old San Juan, Puerto Rico. The economic crisis on the island has spurred many Puerto Ricans to leave for the mainland U.S. (AP)

ALLENTOWN, Pennsylvania — In 2012, worried that her fellow Puerto Ricans in this Rust Belt city had lost touch with their roots, Flor Velez decided to revive the annual Puerto Rican Day Parade. Three years later, the parade has become a major event, fueled by a fresh wave of newcomers fleeing the island’s economic crisis.

The influx of Puerto Ricans to Allentown and other cities such as Atlanta and Orlando, Florida, is driven by a search for jobs, census analysts say. And it marks a break with the migration patterns of previous decades, when Puerto Ricans tended to settle first in New York and other large cities in the Northeast before moving elsewhere in the country.

While newcomers are crammed into temporary housing in Orlando, those who get as far as Allentown have not yet strained the social services system and jobs are still plentiful, said Alan Jennings, executive director of the regional anti-poverty agency, the Community Action Committee of the Lehigh Valley.

“We have this constant churn of people coming in here because there are jobs and the cost of living is reasonable,” said Jennings.

Those who make it here speak of friends and relatives still in Puerto Rico who would like to leave the Caribbean island, but can’t afford the plane ticket, which is about $500 from San Juan to Allentown. The unemployment rate in Puerto Rico is nearly 12 percent and the government last month failed to make a $58 million payment on its $72 billion in debt.

“Puerto Rico right now is just a quagmire and those who can, are getting out. Not everybody can,” said Jennings.

Census estimates show the Allentown area, which includes nearby Bethlehem, Easton and parts of neighboring New Jersey, has gotten most of its 8,500 population increase since 2010 from international migration, which includes Puerto Rico.

“Although we’re growing, it still has that small town feeling versus a New York City,” said Ismael Arcelay, a Puerto Rican community activist who works in the mayor’s office. “Allentown is big enough to grow and small enough to feel like home. That makes them want to stay.” 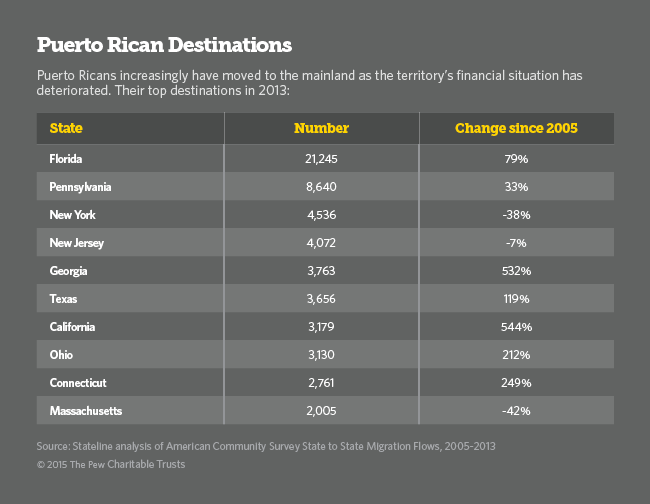 Allentown experienced its first wave of Puerto Rican migration in the 1950s, and some of the city’s current Puerto Rican residents were born here or in traditional strongholds like New York City. But the Allentown area has seen a rapid increase in its Puerto Rican population in recent years. In 2013, the area attracted almost as many new arrivals from Puerto Rico as New York did— almost 5,000 people, according to a Stateline analysis. Today, one-quarter of Allentown’s population is Puerto Rican, one of the highest shares in the country.

Other metro areas with large numbers of new Puerto Rican arrivals are Atlanta, Minneapolis, Orlando and Tampa in Florida, Philadelphia, and Riverside, California, according to the Stateline analysis.

The exodus has accelerated since 2011, according to a Pew Research Center report in July 2015 (Pew also funds Stateline), with about 50,000 people a year leaving the island for the mainland United States. The center found in another study that jobs were the most common reason cited for leaving.

New arrivals in Allentown spoke mostly of jobs — the difficulty of getting them on the island, and their relief at finding them here. Most also spoke of family connections.

Esmeralda Santiago, who wrote a bestselling book, When I Was Puerto Rican, about transitioning from the island’s tree frogs and guava to “Yankee” life in New York in the 1960s, said Puerto Ricans choose places based on people.

“Knowing someone, regardless of whether you know them well or if they’re just a phone number on a scrap of paper, gives you a sense that you’re not alone in this vast continent,” she said.

The pattern holds today, when there’s a new urgency to the exodus.

“When the Puerto Rican on the island is desperate, as so many are right now, they go toward those places that will offer them a place to stay and a familiar culture and customs,” Santiago said.

Indications are the exodus is growing. Puerto Rican government statistics show passenger flights to the mainland, the main way of moving out, increased from about 43,000 to 74,000 last year. The figures don’t indicate how many are leaving for good, but the government believes a substantial number are.

A report by the Federal Reserve Bank of New York last year found that young people without a college degree, who are the most sensitive to job losses in the recent economic turmoil, are the likeliest to leave Puerto Rico. The report put some of the blame for the exodus on government debt, which led to higher taxes, and on high crime rates and the loss of factory jobs that resulted from the repeal of tax incentives for manufacturing in Puerto Rico, which took full effect in 2006. The repeal is seen as a major cause of the long recession that ultimately led to Puerto Rico’s current crisis.

Flor Velez moved to Allentown in 2010, when her job was phased out at a pharmaceutical plant, and she used her savings to invest in real estate here.

New Puerto Rican residents and their advocates in Allentown said most newcomers come in search of work. Velez’s 31-year-old son joined her in Allentown two years ago because he had no job prospects on the island. After learning more English, he became a manager with a welding company.

Allentown Mayor Ed Pawlowski, a Democrat, said meatpackers and distribution facilities for Amazon and Nestle have hired recent migrants. So have piecework sewing factories and trucking operations that are based in Allentown because of the area’s relative affordability and proximity to Philadelphia and New York, said Erika Sutherland, an associate professor of Spanish at Muhlenberg College who helped found a support group for Hispanic immigrants.

“These may not be the most pleasant jobs, but these people have a different attitude about work — they expect to come here and work hard,” said Sutherland.

Some Puerto Ricans in Allentown have faced some anti-immigrant and anti-Hispanic sentiment and discrimination, as have Dominicans and other Hispanics who live in the city, Sutherland said.

“One thing you’ll hear is, ‘Why don’t they go home?’” she said. “But [Puerto Rico] is a part of the United States. Would you tell somebody to go home to New Jersey from Ohio?”

Allentown’s Puerto Rican community traces its roots to the 1950s, when farmworkers on the island were encouraged to migrate because of high unemployment. As chronicled in Hidden From History, a 2000 book by Anna Adams, they found farms and factories in the booming Lehigh Valley hungry for more workers.

Arcelay said the next challenge for the community is to develop leadership and political awareness.

Despite the citizenship and voting rights conferred on Puerto Ricans, they vote less than other Hispanic groups, according to a report by the Center for Puerto Rican Studies. But they are politically active on the island, and could play a growing role on the mainland, especially in swing states such as Florida.

Allentown, where 42 percent of the population is Latino, has two Hispanic representatives on the city council, both of Dominican heritage. If the Puerto Rican community turns out at the polls, “they could make a tremendous difference in an election,” Pawlowski said.

Velez has worked to boost the sense of community among Allentown’s Puerto Ricans. She and her husband organized folklore and history lessons for established residents, teaching traditional Afro-Caribbean song and rhythm forms like bomba and plena.

The mayor gives her credit for reviving the Puerto Rican Day Parade, which has been a showcase for culture and literature, with prizes given for reciting Puerto Rican poetry and answering questions with proper Spanish grammar.

“It was dead, really, before this,” Pawlowski said. “Somebody needed to have a passion for it and nobody did until she came along. Nobody had that passion. Now it gets bigger every year.”