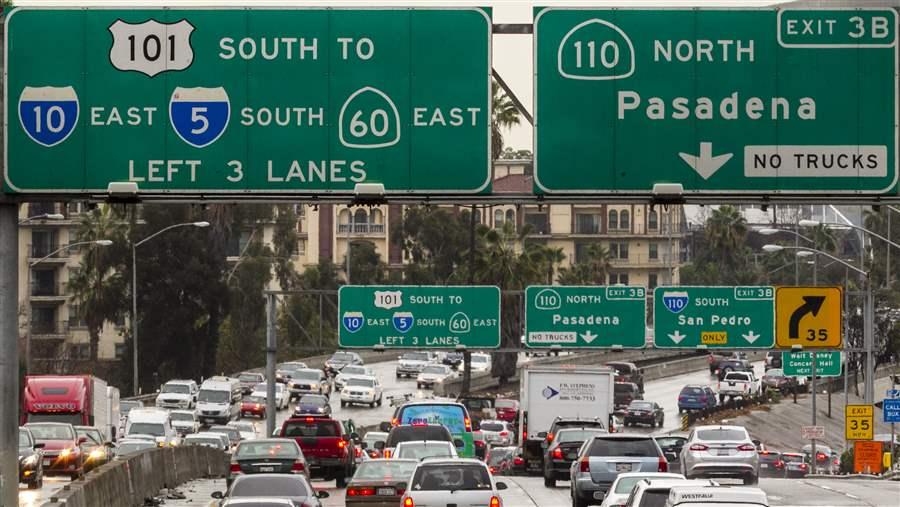 Motorists travel on the eastbound Hollywood Freeway in Los Angeles. California requires auto insurers to charge motorists mostly based on driving record, rather than on occupation, address or education level. (AP)

Be a safe driver. Don’t buy a flashy sports car. Pay the insurance premium on time.

These are maxims many drivers follow to keep their auto insurance costs in check. But they may not be enough for many low-income drivers, who consumer advocates say are routinely priced out of insurance coverage because they are judged not just by their driving records, but by their credit scores, occupation, education level or other factors.

It’s a discriminatory practice by insurance companies that disproportionately increases premium payments for low-income drivers, said J. Robert Hunter, a former Texas insurance commissioner and director of insurance for the Consumer Federation of America (CFA). And some states are trying to stop it.

Three states — California, Hawaii and Massachusetts — prohibit insurers from using credit scores to determine how much drivers should pay. And legislation was introduced this year in almost a dozen others to prevent insurance companies from using credit scores, occupation, education level or other standards in factoring how much they should charge for car insurance, according to the National Conference of State Legislatures.

In addition, California, Florida, Indiana, Maryland, Ohio and, most recently, Pennsylvania, have ruled that insurance companies cannot use “price optimization” — evaluating consumer data or competitors’ prices to determine whether a customer is likely to shop around — to set prices for policies.

Doug Heller, a California-based consultant to the CFA, said low-income drivers often are less likely to shop around for competitive rates partly because of lower financial literacy. Insurance companies spot that, he said, and will raise premiums on those drivers because they think they’ll stick with them rather than go to a competitor.

“The insurance companies charge the most to the people who can afford it the least. That’s because auto insurance companies place such a large emphasis on their customers’ occupation, level of education, credit history and other factors related to wealth, rather than driving safety,” Heller said.

But advocates for insurers say they use legitimate tools to set prices based on their financial risk. Price optimization has actually lowered insurance rates and is likely to create long-term price stabilization, said Robert Hartwig, president and economist at the Insurance Information Institute, a nonprofit communications group supported by the insurance industry. And, he said, auto insurance rates are declining for all drivers, including moderate- and low-income motorists.

His organization also opposes attempts by states to eliminate credit scores and other factors from rate setting, saying those evaluation techniques have proven to be legitimate measures of the financial risks associated with a driver.

All states, except New Hampshire, require drivers to buy at least a minimum amount of auto insurance in the event they cause property damage or injuries. For some low-income drivers facing high insurance rates, that presents a choice between driving illegally or not driving at all.

Insurance companies say they use a multitude of factors to determine how much each customer should pay. The factors can range from driving record and type of car to marital status, credit score, occupation, education and where the driver lives.

Consumer advocates say these rating tools hurt low-income drivers because they are more likely to receive negative marks for being single, having poor credit, having limited education, or living in a neighborhood where there is significant risk of vehicle vandalism or theft.

But Hartwig said the factors insurers use to set prices can be mathematically correlated to the risks associated with insuring a driver.

“Some insurers use education, not all.” Hartwig said. “They do that because they have found that the level of education is associated with losses. There’s no factor that any insurer uses that doesn’t have to do with loss.”

A recent Consumer Reports study of 2 billion insurance quotes at 700 companies found that insurers are less likely to assess motorists based on their driving habits, and more likely to do so based on their socioeconomic status.

“Not only are there pricing issues, but there are some fundamental fairness issues in the way that pricing results for good drivers,” said Norma Garcia, a senior attorney with Consumers Union, the policy and action division of Consumer Reports. “If you’ve had a drunk-driving conviction, chances are you’re a worse driver than someone out there who has a [low] credit score.”

But setting prices solely based on a driver’s record can pose problems because records of crashes or moving violations are often missing from state databases, Hartwig said.

Hartwig attributes the decline in pricing to increased competition among insurance companies. He said policy options are available to most drivers regardless of risk associated with a vehicle or driving history, and coverage options are “generally affordable.”

“A big part of the reason is it’s a very competitive market and never before have there been more insurers competing for your business,” Hartwig said. “And never before have you been able to generate so many quotes so quickly from so many insurers.”

A new study from the Insurance Research Council points to data indicating auto insurance is becoming more affordable for drivers at all income levels, decreasing from 2 percent to less than 1.5 percent of an average consumer’s earnings since the 1990s. However, people with the lowest incomes are still spending more than 3.5 percent of their income on auto insurance. That number is down from more than 4 percent in the 1990s.

For the country’s highest earners, the share of income spent on insurance decreased from 2 percent to less than 1 percent in that time.

“You can say on average premiums have come down,” Heller said of studies that point to lower prices. “But that doesn’t mean affordability has increased. They’ve come down on average, but industry practices have come down hard on poor people.”

While states have not issued many strict rate-setting reforms, California has the oldest and most comprehensive rating structure, advocates say.

Adopted in 1988 as a voter referendum, California’s Proposition 103 requires that insurance providers in the state prioritize three main factors — years of experience, driving record and number of miles driven each year — before they consider 16 other optional factors such as marital status, age, frequency of insurance claims or address. The optional factors cannot have more influence than the three mandatory elements in determining a driver’s rate quote.

“[In California] you need to provide the documentation and convince state experts that you’re not ripping your customers off,” Heller said. “Where, in most states, we’re not going to take a second look.”

A 2013 report by the CFA found that the California reforms had saved state drivers more than $100 billion over 25 years and that they were spending .3 percent less on insurance in 2010 than they had in 1989, while the country was spending 43.3 percent more.

“It’s interesting because a lot of things the auto insurance industry are claiming are impossible or unrealistic are already happening,” Garcia said. “They’re doing just fine in California.”