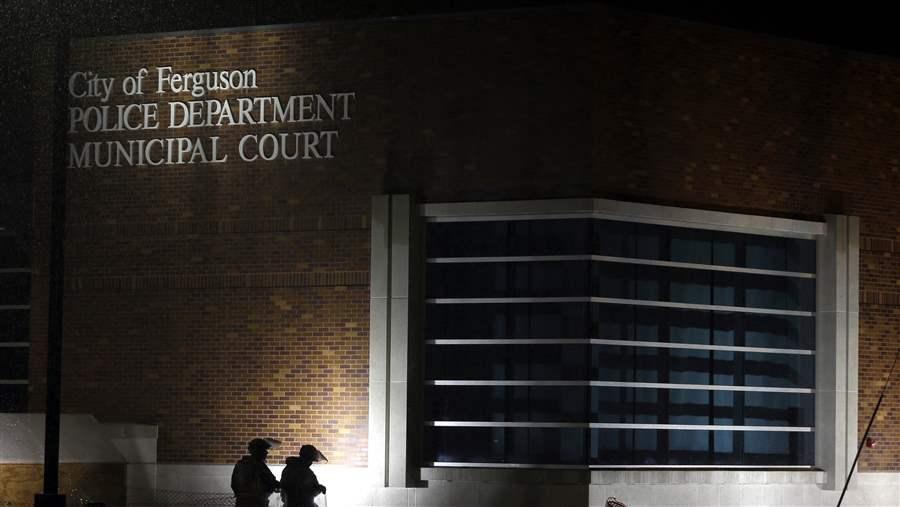 Members of the Missouri National Guard stand outside the Ferguson Police Department and Municipal Court last year. Missouri isn’t alone in having a local court system that serves as a revenue-raising arm of government. (AP)

This story has been updated to clarify a statement by Greg Hurley of the National Center for State Courts.

Say you’re caught driving 10 miles an hour over the posted speed limit in California. The state’s base fine for that offense is $35. But then the state adds an additional $40. The county adds $28. There’s an $8 fee to fund emergency medical services, a $20 fee to fund DNA testing, a $40 court operations fee and more.

In total, that relatively minor moving violation just cost you $238.00.

For years, state and local governments have attached additional fees and costs to everything from speeding tickets to parole supervision. The extra assessments are supposed to pay for court operations and associated justice system programs, such as DNA testing.

According to a growing body of research, however, they also can trap poor people in debt, and corrupt law enforcement and the courts.

Citing such studies, some states are trying to scale back court-ordered debt — but they have run into significant obstacles. In a time of tight budgets, it can be politically problematic to choke off a steady revenue source. Passing a state law restricting such fees doesn’t necessarily mean that local courts, which may operate with significant autonomy, will abide by it.

Court activities can be opaque, with the imposition and collection of debt varying not just county by county but judge by judge. “It’s very difficult to characterize across the nation, because it’s almost complete chaos,” said Karin Martin, assistant professor at John Jay College of Criminal Justice at the City University of New York.

A U.S. Department of Justice investigation revealed in March that officials in Ferguson, Missouri, explicitly asked the police department to write tickets to raise more money for the town. Courts threw low-income people into jail when they couldn’t pay their debts— a throwback to the 19th century practice of “debtors’ prisons.”

Harvey’s group has witnessed how failure to pay municipal court debt can escalate to suspended driver’s licenses, arrests, and lost jobs and housing — a vicious cycle that makes court debt even harder to repay. From Milwaukee to Tulsa, journalists and advocates such as the American Civil Liberties Union (ACLU) have documented the weight court fees and fines can place on the poor.

“I wish this was something new. I wish it were something that only impacted St. Louis because it would be easier to get at,” Harvey said. “It’s not. It’s a nationwide phenomenon.”

His group also has witnessed St. Louis-area courts violating the U.S. Constitution by forbidding non-defendants, such as children, from entering the court, and violating the municipal court system’s rule (backed by Supreme Court precedent) that poor people have the right to a hearing to determine their ability to pay.

Democratic Gov. Jay Nixon sat in a St. Louis courtroom last month and signed a bill he said would reform Missouri’s city courts. The new law prohibits courts from throwing people in jail just for failing to pay a minor traffic fine, limits combined fees and fines from minor traffic violations to $300, and prevents towns from generating more that 20 percent of their revenue from traffic fines. For towns in St. Louis County, including Ferguson, it’s 12.5 percent.

The law, which goes into effect Friday, already has driven Ferguson to withdraw 10,000 old warrants and led the state to reinstate driver’s licenses suspended for failure to appear in court or pay court-ordered debt, according to the St. Louis Post-Dispatch.

In Ferguson, more than half of tickets issued last year were for violations unrelated to driving, according to the Post-Dispatch. Local infractions include wearing saggy pants, loitering and growing your grass too high

Then there’s the question of what it will take to get courts to comply with the new law and existing laws that protect defendants.

Nixon may want to learn from Ohio’s struggle to monitor city courts. Although the state has strong legal protections against debtors’ prisons, the Ohio ACLU investigated 10 counties and found evidence of incarceration for failure to pay legal debt in six of them.

In some Ohio municipalities, more warrants against debtors were issued at the end of the fiscal year, suggesting that towns were seeking revenue, said Mike Brickner, who led the ACLU investigation published in 2013. But often judges just weren’t clear on the law or were blindly copying their predecessors, he said. “I think that for a lot of people, it was actually a little bit of inertia, or tradition,” Brickner said.

After the ACLU released its findings, Chief Justice of the Ohio Supreme Court, Maureen O’Connor, pledged to educate judges and court personnel on lawful debt collection practices. The Supreme Court gave every city and county judge in the state written guidelines last year.

But O’Connor doesn’t have jurisdiction over all city courts. Small-town “Mayor’s Courts” are largely autonomous.

A number of factors have driven fines and fees upward, said Lauren Brooke-Eisen, senior counsel at the Brennan Center for Justice at New York University School of Law. Courts are overburdened and a sense of fiscal crisis is driving governments to seek out alternative sources of revenue.

“That’s not to say that some of these aren’t going to a good cause,” like compensating victims, she said of added assessments. But the system’s getting increasingly complex.

Many states have little idea how much courts collect in fees and fines and how they spend the money.

“We do not track, and courts are not required to provide us with this information,” Bret Crow, the director of the Supreme Court of Ohio’s office of public information, wrote in an email. He doesn’t think the data exist anywhere. Ohio has a decentralized court system, he explained, in which local courts operate with a lot of independence.

The California Judicial Council, the policymaking arm of the state’s judiciary, doesn’t maintain complete records either. “Incomplete and inconsistent records make it difficult to know with certainty the amount of revenues collected and whether they have been properly distributed among state and local funds,” a 2014 California Legislative Analyst’s Office report said. The report estimated that courts collected $1.8 billion in 2011-12, up from 1.4 billion in 2008-2009.

Yet because fees, surcharges and court costs serve as a source of revenue, they’re hard to eliminate. “What’s happened is you have these constituencies that have sort of built a reliance on a stream of revenue that derives from traffic tickets,” said Mike Herald, a legislative advocate with the Western Center on Law and Poverty, a legal services group.

Herald’s group has tried for years to get the California Legislature to reform traffic courts. A major challenge has always been the price tag.

A bill proposed last year, for example, would have restored driver’s licenses to delinquent debtors who agreed to pay in installments or perform community service. The bill died after the state calculated it would cost local and state governments $6.7 million in lost collections and $1.4 million in increased court costs.

But traffic court reform gained momentum recently when the Western Center and other legal services groups released a report titled “Not Just a Ferguson Problem.” The report calculated that over 4.2 million Californians had their licenses suspended— and never reinstated — for failing to pay court debt from 2006-2013.

When debtors miss an initial deadline to pay up or appear in court they’re assessed an additional $300. Some courts don’t let debtors contest their tickets until they pay in full, the report found.

As in other states, the findings snapped policymakers into action. The Judicial Council created an emergency rule to make sure drivers could contest unpaid tickets, and Democratic Gov. Jerry Brown added a one-time traffic ticket amnesty program to his budget.

It’s understandable that California courts would balk at potentially losing millions of dollars in collections, particularly considering deep state cuts to judiciary funding during the Great Recession, Herald said. But he contends that much of the promised money is fictitious. “Our clients don’t have the money” to pay their debts, he said.

How Much of a Moneymaker?

The ACLU and other legal advocates argue that charging poor people high fines and fees isn’t actually a moneymaker for government. The cost of tracking down a very poor debtor, arresting her, hauling her before a court and jailing her may outweigh revenue from the payments she’s able to scrape together.

But again, lack of data makes it hard to prove this hypothesis. The ACLU of Ohio tried to figure out how much incarcerating debtors in one city cost taxpayers, but information was incomplete and hard to obtain. The cost of incarcerating someone came out of the sheriff’s budget, while revenue from collections went into the court budget. The group settled for writing case studies instead.

Rather than compelling people to pay up, aggressive collection practices such as incarceration or license suspensions just make it harder for people to work to earn money. “Courts look at this as enforcement, but it’s failed public policy,” Herald said of driver’s license suspensions.

State task forces and supreme courts routinely reiterate that courts shouldn’t be treated as revenue sources. The Conference of State Court Administrators, a national association, put out a policy paper outlining the principle in 2011.

Fees and fines probably won’t decrease any time soon, said Greg Hurley of the National Center for State Courts, a nonprofit court improvement organization. But they might stay level.