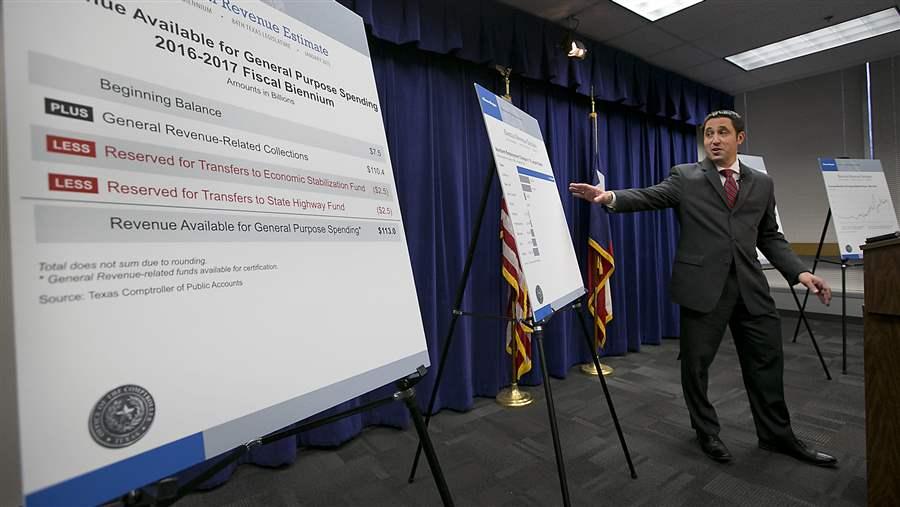 Texas Comptroller Glenn Hegar announces in January that the legislature will have $113 billion in revenue to spend over the next two years. While a new study lauds Hegar’s office for creating innovative technology programs, it finds that many state financial agencies are struggling to transition to the digital revolution. (Ralph Barrera, Austin American-Statesman via AP)

CHICAGO—Many state financial agencies say they are having a tough time transitioning to the digital revolution, citing a culture that often impedes innovation and collaboration and purchasing rules that make it tough to adapt to technological changes.

Those are some of the findings of a new survey released on Monday at the National Association of State Auditors, Comptrollers and Treasurers (NASACT) annual conference.

The joint study by consulting firm Deloitte and NASACT found that state financial organizations often lack a clear, defined digital strategy, a focus on citizens’ and businesses’ needs and a workforce with the skills and entrepreneurial spirit required for digital transformation.

“It’s pretty clear that they believe there are some significant barriers in them getting where they need to be,” said William Eggers, a Deloitte research director who coauthored the study. “Digital is all about trying a lot of things and seeing what works. You need a culture that is open to taking risks and innovation. What we found here is that there’s a pretty big divergence with the private sector.”

Kristin Russell, a Deloitte director, said the study also found that government organizations have “almost a profound recognition” that to succeed, digital transformation must be on their agenda.

“It’s difficult for them to pivot from where they are today, but it’s necessary to reduce costs, improve efficiency and better engage with citizens,” she said.

Thirty-three financial executives from 26 states, mostly from auditors general or comptrollers’ offices, responded to the survey, which found that digital technology is having the biggest effect on revenue collection, auditing and managing expenses.

“Digital means doing things faster, making things more customer-friendly, reducing costs,” said Deloitte’s Eggers. “Ultimately, you will see when government doesn’t do this well, it reduces trust in government. When they do it well, it will increase trust.”

Not all state financial departments are struggling. Nearly half of the agencies in the survey said they had developed a clear digital strategy and the majority of them said they had a leader or group in charge that pushed for new approaches.

But some agencies have done a better job than others embracing emerging technology, according to the study.

It pointed to the New York Department of Taxation and Finance, which uses predictive analytics software to detect bogus personal income tax returns. The system automatically reviews each of the 10 million returns filed annually and looks for those that have anomalies, such as incorrect mailing addresses or suspicious IP addresses.

Last year, the system saved $450 million by stopping 252,000 “questionable” tax refund claims, many of them fraudulent, according to Nonie Manion, the agency’s executive deputy commissioner.

“When this kind of thing happens, people are basically dipping into New York state’s money and stealing it. They don’t have any right to it. They’re not entitled to it,” Manion said.

In one case in 2013, for example, the software helped uncover a fraudulent scheme in which more than 120 returns were filed from nine similar IP addresses—all from the Fort Lauderdale, Florida, area.

Manion said that the sophisticated technology also has made a huge difference in how her agency does its work.

“In the past, we had to have someone physically look at the returns and see if there was something wrong. Some would even take the paper returns and spread them out on six-foot tables,” she said. “Now, we’re looking at the data. The technology allows us to do the analytics of the full 10 million tax returns.”

Some state financial departments have turned to social media or other high tech tools to improve the way they do business, the Deloitte report found.

It cited the Texas Comptroller of Public Accounts Office, which won a state award in June for an innovative social media campaign that used Facebook to target people who might have unclaimed property, such as forgotten bank accounts, mineral royalties and insurance premiums. The campaign generated more than $5 million in claims owed to Texans since December 2013.

The Deloitte report also lauded the Texas agency for creating an online purchasing system, TxSmartBuy.com, used by state and local agencies to buy everything from pencils to asphalt and vehicles. It offers an Amazon-like search tool for users, who can find products, pick the ones they want, place them in an online “shopping cart” and order them.

The cloud-based system replaced a slower, more cumbersome one that was hard to search and expensive to maintain—costing the comptroller’s office $11.5 million a year. Texas cut expenses to less than $3.3 million a year.

“We’ve had a very positive reaction from the state agencies and local governments that use the system,” said Jay Waldo, director of innovation and technology in the comptroller’s office. “If you wanted to search for chairs, with the old system, it might have taken a minute or more to get the information back. It would bog down on any search request. This new one handles a much bigger volume. It only takes seconds.”

Waldo said the system also cut down on the time his agency’s staffers spend dealing with customers’ problems and allows it to track everything that’s purchased, calling it “smart government.”

While some financial agencies are more equipped to respond to digital trends, many are still stymied, the Deloitte survey found. Among the barriers executives cited: insufficient funding, competing priorities and the lack of skills in the workforce.

Many survey respondents also said they worried about putting their data onto the cloud or using social media—something done routinely in the private sector.

“In the private sector, it’s a big part of what’s fueling the technology revolution,” said Deloitte’s Eggers. “But the states say they’re concerned about security. This is a transition and people sometimes err on the very cautious side.”

The survey also found that many agencies aren’t thinking of their users when they design their systems.

“That’s an area they’re struggling with right now,” Eggers said. “They need to put the user—whether a business or a citizen—at the center. You can’t just guess at what they want. You have to do interviews with them and test it out to see whether it’s working for them.”

Another big concern is recruiting and retaining a tech-savvy workforce. Eggers said agencies should look beyond compensation and benefits, and also create internships and fellowships and experiment with competitions and crowdsourcing.

“Millennials and younger people are looking to make positive impact, so the [agency] strategy should highlight the impact that the work has on the lives of citizens,” he said.

The report also recommended allocating time and space for employees to brainstorm about ideas and problems. It noted that even changing office layouts, such as creating an open setup or seating disparate teams together, can help foster innovation.

State financial agencies are aware that they have to change the way they think about digital strategy, the report concluded. Nearly all of those surveyed agreed that technology is important and is transforming government.

“There’s a realization that this is a different way of working than how they’ve worked for decades,” Eggers said. “They’ve just got a big hill to climb in getting there.”